John C Foster Takes it to the Toilet 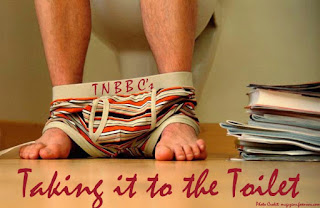 Today, John C Foster takes it to the toilet. John writes thrillers and dark fiction and lives in New York City with his lady, Linda, and their dog, Coraline. Perpetual Motion Machine Publishing will publish Foster’s first novel, Dead Men, in July, 2015. For more information on Dead Men and his other work, please visit www.johnfosterfiction.com.


The Porcelain Fortress of Solitude 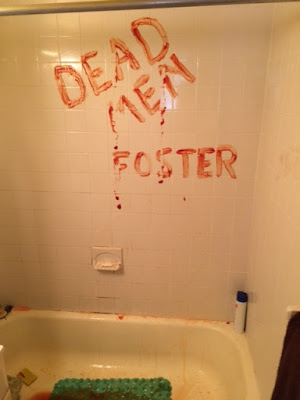 I’ll tell you up front, I can’t relax. I can control myself, I can concentrate intensely, but I’ll be damned if I can just sit back and listen to the wind – I envy people who can. To slow down my RPMs I have to do something…water the plants in our little New York City roof garden, take the dog to the park for a run around, work out until I have no choice but to collapse. I can’t just zen out…except in one place.

My fortress of solitude.

My chamber of chill.

The bathroom. (Oh cut it out, you know it’s the adult version of a tree fort, especially in the city). But I don’t just abase myself at the holy throne for a few minutes of wordy release, I…

I take baths. No, I don’t light candles and play old John Tesh tapes, I just don’t have a hot tub at home and the bathtub is the closest thing I’ve got. (Cool aside, a friend in Greenwich Village has her bathtub in the kitchen – how awesome would it be to be able to reach the fridge from the tub?) Seriously though, I run the hot water, lean back into the heat and white noise and read.

Not toilet books – I mean, we have those too, Calvin and Hobbes, the Shakespearean Insult Generator and Great Lies to Tell Small Kids rest within easy reach. But my rectangular Jacuzzi is for serious, pickle your toes reading. I tend to have more than one book going at a time and when I do, I counter program the books against each other with both bedtime reading and bathtub reading in mind. Right now, I’m waist deep in the novel Point Hollow by the talented Rio Youers and the collection of short fiction and poetry Blood Will Have Its Season by Joseph S. Pulver, Sr.

Point Hollow is a new twist on the classic small town haunted by secrets story, but instead of Hill House, it’s a damned hill itself, a mountain that the locals call Abraham’s Faith looms over the town and it demands sacrifices. Blood sacrifices in a cave filled with the bones of children. This is my immersion story when I know I have time to lay back with it and follow a guy named Matt as he returns to the site of his childhood terror and another fella named Oliver who…well, read it and find out.

Small towns with terrible secrets draw me like a moth to flame. There are many other small town terrors, but Salem’s Lot by Stephen King lurks at the top of that particular heap in my dark heart. Wandering in its own frightening orbit are the Oxrun Station stories of the great Charles L. Grant. Can today’s writers hit this classic genre with the same deceptive pacing and inevitability? Will the new story ring in the memory as do the old?

It’s with real joy that I picked up Youers’s novel, a contemporary tale that manages the neat trick of picking up those old time vibrations with a present day voice. If you like to wander in bad places, Point Hollow is a great read.

Joe Pulver…I’m not even sure how to describe his writing except to say that his voice is singular, unflinching and darkly psychedelic in his ability to replace traditional structures with his own and drag you, willing or not, into an altered reality. His prose is compelling and more poetic than most poems and his poems paint pictures of such vividness with pacing and explosive words they defy you not to fall into his black-hearted rabbit hole. He’s been compared to Laird Barron and Lovecraft, but I think he has his own weird and vicious voice. He’s also a great Jacuzzi jaunt for me because he varies wildly in length. A story might cover two pages or ten. The man clearly cares only about using the correct amount of paper to tell the tale with lean completeness. Blood Will Have Its Season knocks me farther out of the park in ten minutes than most books do in a week.

Hey, that’s how I relax with a book. How do you do it?