This is Sean Murphy.

Sean Murphy has been publishing fiction, reviews (of music, movie, book, food), and essays on the technology industry for almost twenty years. He has appeared on NPR’s “All Things Considered” and been quoted in USA Today, The New York Times, The Huffington Post and AdAge. In addition, he is an associate editor at The Weeklings, where he contributes a monthly column. He writes regularly for PopMatters, and his work has also appeared in Punchnel’s, The Village Voice, AlterNet, Web Del Sol, All About Jazz, The Good Men Project, Elephant Journal and Northern Virginia Magazine. He is the recipient of a Noepe Center for Literary Arts Writer Residency. Murphy’s best-selling memoir Please Talk about Me When I'm Gone was released in 2013. His novel Not To Mention a Nice Life will be published in June 2015.

To learn more about Sean Murphy’s writing and to check his events schedule, please visit http://seanmurphy.net/. 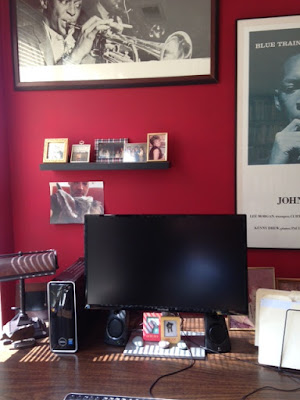 So, this is the official place I write, in that there’s a desk, a computer and a chair, and eventually all final drafts of manuscripts (be they essays, music reviews, poems, memoirs or novels) go from there to here.

But a more accurate and less respectable answer would involve me taking pictures of my car, my work office or especially my candle wax and wine-stained coffee table, where I often sit, with legal pad, hammering out initial drafts in my recalcitrantly old school fashion. All of these places are frequent spots where I stop to jot down an idea. Or, even more accurately, where the ideas stop me and oblige me to capture them before they fly off to a more receptive and attentive writer’s muse. And the most honest answer of all would be to take a picture of my mind (not that this would be possible or something anyone—including myself—would want to see): I suspect most writers will concur that a great deal of writing occurs when we are thinking, or remembering, or trying to do anything other than write. In his autobiography Beneath the Underdog, the great jazz musician Charles Mingus recalls reaching a stage in his development where he was always composing. Through a combination of discipline and dedication—and to accommodate the urgent voices crowding his mind, demanding to be expressed—he found that while he worked, sat in a cab, or walked down the street, he was always practicing. He never turned it off, and that is the secret. 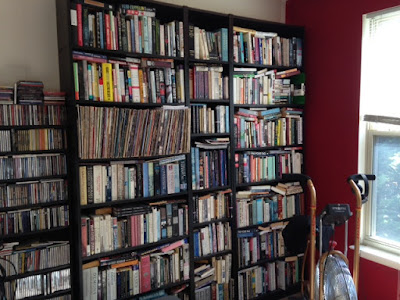 Ideally, a writer wants a space that is clean, quiet and peaceful, perhaps with a view to stimulate the imagination, etc. In reality, many writers opt for a place that minimizes distraction. If a writer’s space is too perfect and looks like something out of a movie, it’s likely they have spent more time worrying about what it should look like to be a writer. Writing is seldom sexy, and no sane author would ever want a camera on them while they went about their business: it’s intense, personal and often boring work.

So for me, being surrounded by books and pictures of family and a couple of my heroes (Miles and Coltrane), helps me feel equal parts comforted and inspired. Music is always on, although jazz and classical work best, as you don’t want the voices from the record competing with the voices in your head. No matter the setting, everything is as it should be when the writer forgets where he is, or even who he is, following those voices from here to there, in search of the story. These are the moments writers live for. The rest of the times, a proverbial room of one’s own is a necessity, but should always also be considered a luxury.