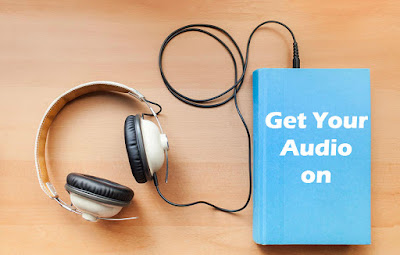 When you look at how many audio books I review each year, it's probably hard to believe that I wasn't always a fan. As a kid, I loved listening to those books on tape, where you popped the cassette in and followed along in the book as the narrator read the story to you. But as I got older, I just couldn't get into having a book "read" to me. I gave it the ole college try with a free download of Into the Wild but the narrator was just so monotone and dull I couldn't go very far without catching my mind wandering and realizing I had just missed the last few minutes of the story.

But long commutes for work and a desire to read more books each year brought me back to audio again and again. Eventually I found the perfect pairing of narrator and story and fell head over heels for the format.

And I'm not the only one! Check out what Lindsey, Melanie, Drew, and I enjoy listening to:

What Lindsey listens to:

Jim Dale could read me a phonebook and I would listen raptly for hours. Of course the books are fantastic, but there is a special life and joy and sense of wonder that Jim Dale brings to the whole series.

My husband and I listened to Outliers while we drove across country a few years ago. The facts were interesting and kept our conversation going for the long green hours across the Midwest. There was something very immediate and connective with Malcolm Gladwell reading the book himself too, as if he was so truly involved in his writing that he couldn’t wait to share it with you.

This is a bit of a cheat, since it’s not an audiobook in the truest sense. Billy Collins does have an audio collection of poetry, The Best Cigarette- and it is fantastic- but I adore, and replay, his performance at the Peter Norton Symphony a few times a year. His delivery, his comments on the poems, and the general selection of poems he shares make this a must for poetry lovers.


When I was pregnant and suffering from terrible insomnia I listened to the Hunger Games books on a loop day after day. I liked the plot of the novels when I read them, but I’ve never been a big fan of first person narration. That changed drastically when I listen to the audiobook versions Suzanne Collins’ novels. Hearing the first person thoughts and actions in someone else’s voice, other than the one in my head, made the story and the characters even more lively- more fleshed out some how. Not the best audio performance in the world, but these books will likely stay in my listening cycle for a while.


What Melanie listens to:

World War Z: An Oral History of the Zombie War by Max Brooks.

This work is a must-listen. A young journalist, narrated by the author, interviews people from all walks of life and parts of the world after WWZ. Each person is narrated by a different voice actor (many famous), and you absolutely need to hear the inflections in their voices to hear some of the serious shit that went down. On paper, WWZ might all blur together.

Read by one voice actor, Ari Fliakos is able to bring to life a variety of characters, such as the narrator, who is a young man; the young man's love interest, a young woman who is very techie and excitable; and old members of a secret book group, both male and female. I can see how some of the characters would come off as too eager or too cliche on page, so this work is best listened to.

The Year of the Flood and MaddAddam by Margaret Atwood.

This is another audiobook that makes use of multiple voice actors, which is helpful when the point of view changes. That's not the only benefit: since Atwood's trilogy (book #1 is Oryx and Crake, which I read in paperback) focuses on life post-apocalypse, there is an emphasis on the importance of oral tradition, to carry on a world that new generations won't have experienced. For that reason, it's best to listen these books.


What Drew listens to:


So I have a confession: I never really liked audiobooks. I was one of those kids (and grew into one of those adults) who'd much rather have the tactile object - to be able to look up words, to give characters my own voices, to go at my own flow.  Of late, I've gotten into them again tentatively (Eric Smith's Inked, for example, was a GREAT audiobook adventure that I'm glad I read)... but there are two that stand out for me in my childhood as all the things an audiobook can be.

My family used to drive to the Outer Banks from Philadelphia every summer and one summer, my parents (trying to get as into reading as my sister and I were) decided that they'd pick two to bring along with us.

They were James Thurber's The 13 Clocks and Brian Jacques' The Pearls of Lutra.

I recall The 13 Clocks as rhythmic, almost hypnotically so - a modern fairytale of sorts, with an evil Duke and a gallant Prince. There was something called a Golux? I remember being transfixed by Edward Woodward's reading.

As for The Pearls of Lutra, I actually think reading it and having it as an audiobook is what makes it my favorite Redwall sequel (e.g. not one of the first four books).  Jacques himself read it, which was a treat, and the story is one of the most adventurous of the series. I remember all four of us being caught up in the story, cheering and laughing as we traveled.


What Lori listens to:

As I'm sure you all know by now, I spend all of my time reading small press, so I try to save most of my audio listening for the Big 5. Here are some of the best narrator/story pairings, in the biggies and the smallies, that I've come across in the past couple of years:

Ron Perlman - the odd-faced man behind HellBoy and the Beauty and the Beast series - has a wonderfully deep and lovely reading voice and he did a phenomenal job with the narration. His character voices were natural and subtle, so you always knew who was talking without being distracted away from the story. Unlike most of the other audiobooks I had listened to prior to this one, he didn't attempt to make the women sound like women - those nasally, high pitched, whiny voices I had begun to believe were mandatory when narrating - and I love him for that.

Go the Fuck to Sleep read by Samuel L Jackson

Do I really need to tell you how fucking AWESOME this reading is?

Jesus' Son read by Will Patton

I want Will Patton to narrate my life. There is no more perfect pairing in the world, in my opinion. Will's voice and Denis Johnson's words were a match made in heaven. This goes for Train Dreams as well! Will Patton nails it once again with this one and his pitch perfect pacing, filling each sentence with raw and ragged emotion. I could not get enough of these audios. As soon as one book ended, it was back to the bookstore to buy the next.

Oh hells yeah. Though I wasn't entirely crazy about the women narrators, the overall tone and theme of the book hooked me like you wouldn't believe. Much like the Denis Johnson books above, I chewed through these audio books like an addict. I was actually looking for reasons to be in the car, alone, so I could keep listening to them!

The Martian read by RC Bray

Holy sarcasm and witty humor, batman! This self pubbed-turned-Big 5 hit was a hilarious listen. Podium Publishing did a great job matching the narrator with the Weir's writing. He nailed the balance between witty sarcasm and hopeful hopelessness... And don't listen to those reviewers who poo-poo the upbeat and charming personality of our fearless astronaut. The cheeky and refreshing humor was exactly what the book needed to keep it moving along and keep its readers engaged. I'm not sure any of us would have been able to handle a cranky, blubbering account of man's attempt to survive the unsurvivable. And for the record, the trailer for the film version looks badass!
Posted by TNBBC Super Mod at 5:00 AM