This is Rebecca Foust.

Rebecca was the 2014 Dartmouth Poet in Residence and is the recipient of fellowships from the Frost Place and the MacDowell Colony. New poems are in the Hudson Review, Massachusetts Review, Mid-American Review, North American Review, Omniverse, and other journals, and an essay that won the 2014 Constance Rooke Creative Nonfiction Award is forthcoming in the Malahat Review. Foust’s most recent book, Paradise Drive, won the 2015 Press 53 Award for Poetry and can be pre-ordered at http://www.press53.com/Award_for_Poetry.html and for more information visit http://rebeccafoust.com/

Where I write is—everywhere—I never know when an idea is going to ping my awareness, and I try to be ready by carrying a small notebook and pencil stub anywhere I go, even on short walks and especially in the car; there is something about the mind-disconnect that happens while driving that seems to invite ideas in.

Before last year I’d never been on a writing retreat. Who needs it, I thought. Look, I have a desk. With the kids grown up, I have some free time in my day. Why leave home to write? But I decided to try it and last year attended three long writer’s residencies: Vermont Studio Center (January), the Frost Place (July and August) and the MacDowell Colony (October). What I learned was a more profound version of what I’d experienced walking or driving: motion and change-of-place wakes up the part of the brain that receives ideas. I also learned the value of a longer retreats for projects that otherwise can seem too big or sprawling to tackle at home.

At the Vermont Studio Center I joined a community of about 60 other writers and artists, meeting for meals and evening talks and otherwise working in solitude in a bright warm studio that was, (thankfully in that long span of days where below-zero temperatures bloomed ice feathers from river mist) only steps away from the dorm where I slept and the “Red Mill” where delicious healthy meals were served. While there I worked on a significant revision of Paradise Drive, the manuscript that recently won the 2015 Press 53 Award for poetry and will be released in April at AWP.  I’d been writing those sonnets since 2009 and had tried several book sequences, but it was at VSC that Paradise Drive really jelled into a narratively-linked sequence telling the story of a modern day pilgrim who makes a spiritual and geographic journey that begins in the mountains of rustbelt Pennsylvania and ends in the postcard-perfect hills of a tony suburb in Marin County, California. One of the wonderful things about pulling together a book is that the process generates new poems, and I came away from VSC with not only a stronger manuscript but also a sheaf of new poems. This was my view while I worked at my desk at VSC: 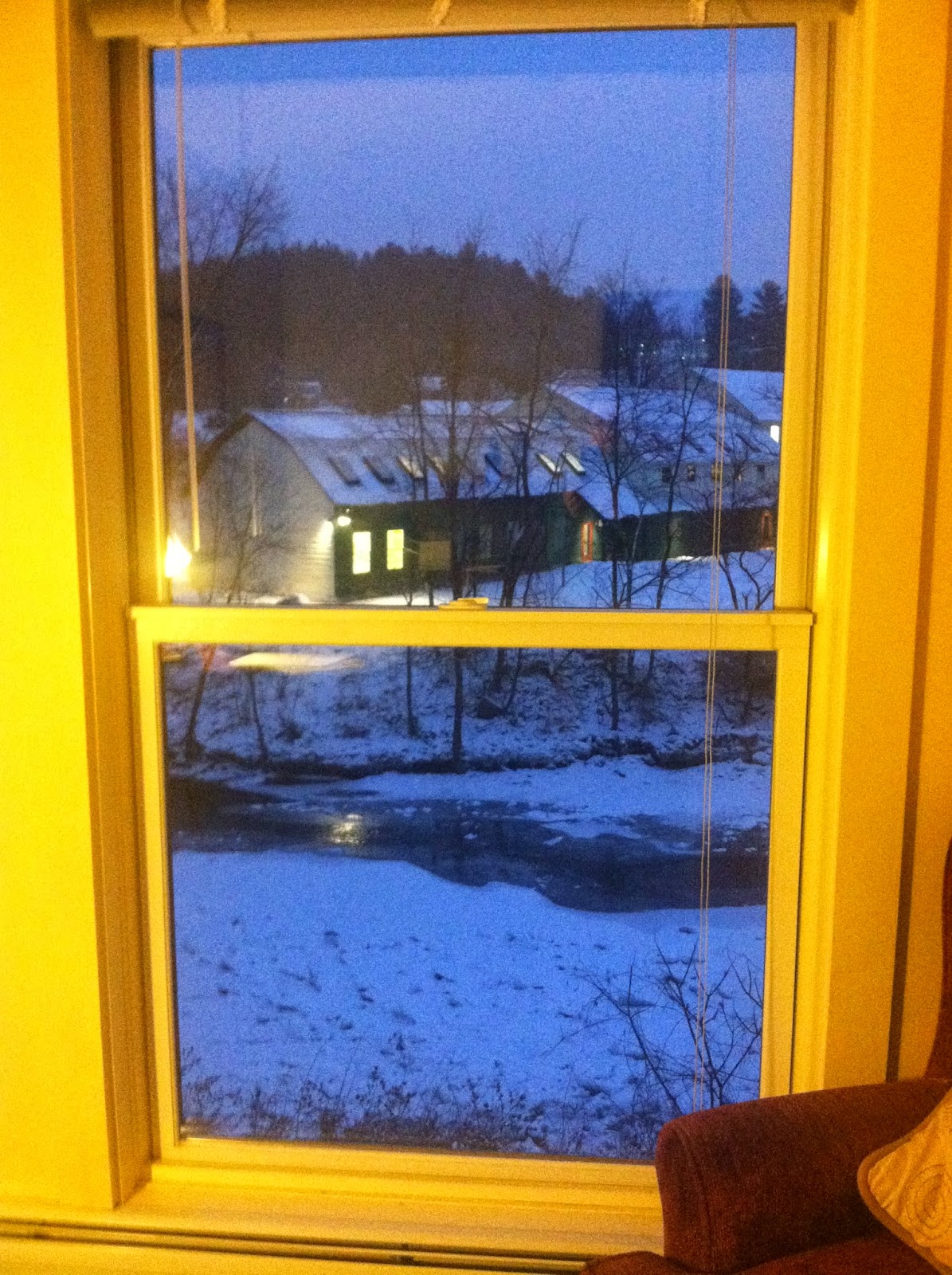 I enjoyed the after-dinner artist talks and especially Open Studio night where I saw a glass sculpture that brought the chinkle and glitter of the icy outside weather into the room: 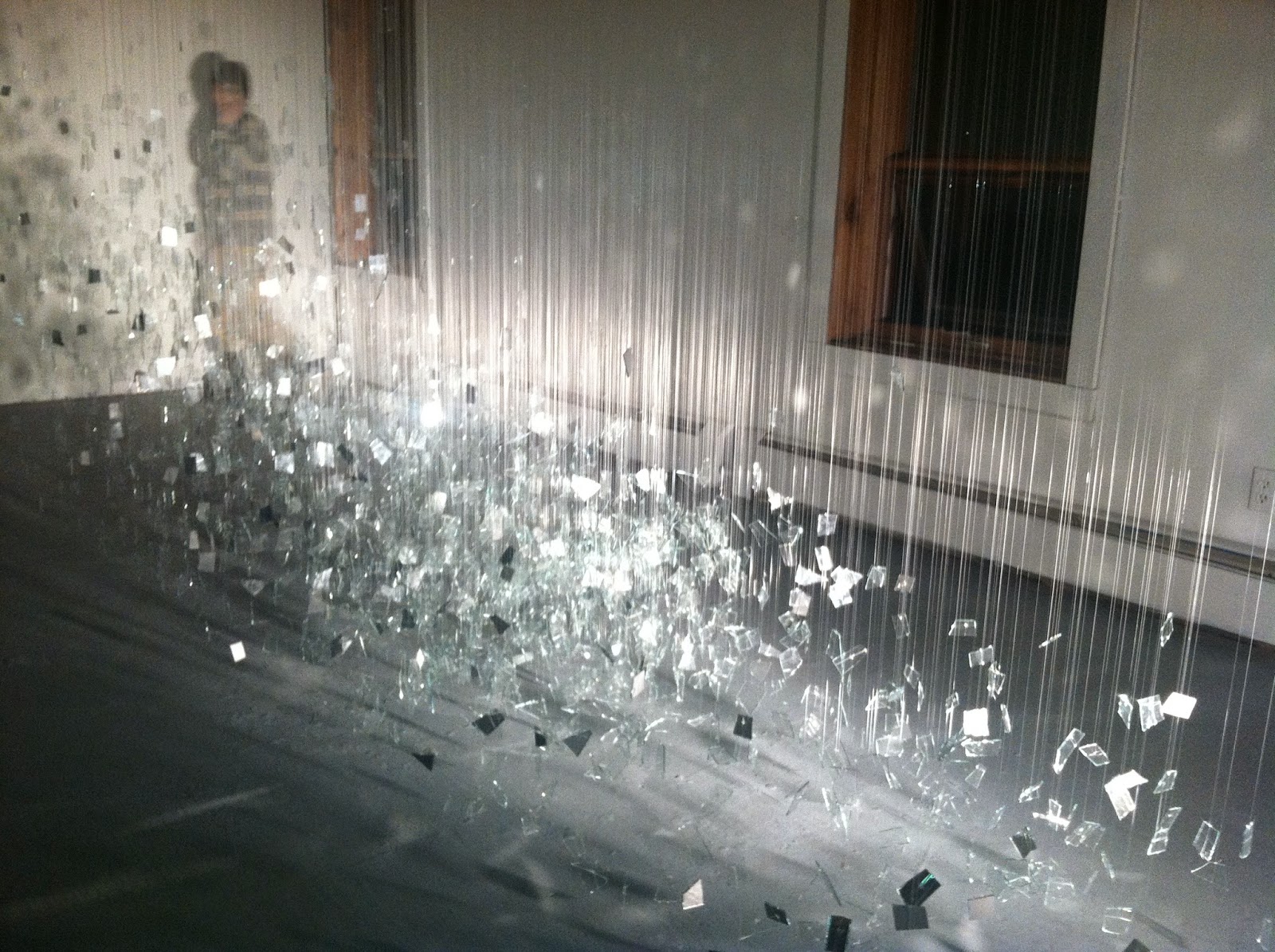 While writing all the sonnets that eventually became Paradise Drive, I was continuing to free verse and in other forms, and my focus while in residence at The Frost Place was finding all those other poems, printing them out and trying to discover if I had another book. TFP’s Dartmouth Poet in Residence program is a wonderful, unique residency experience which gave me the chance to live and work by myself in Robert Frost’s farmhouse in Franconia, NH for two months. Here is a picture of what the house looked like when I arrived in July 2014: 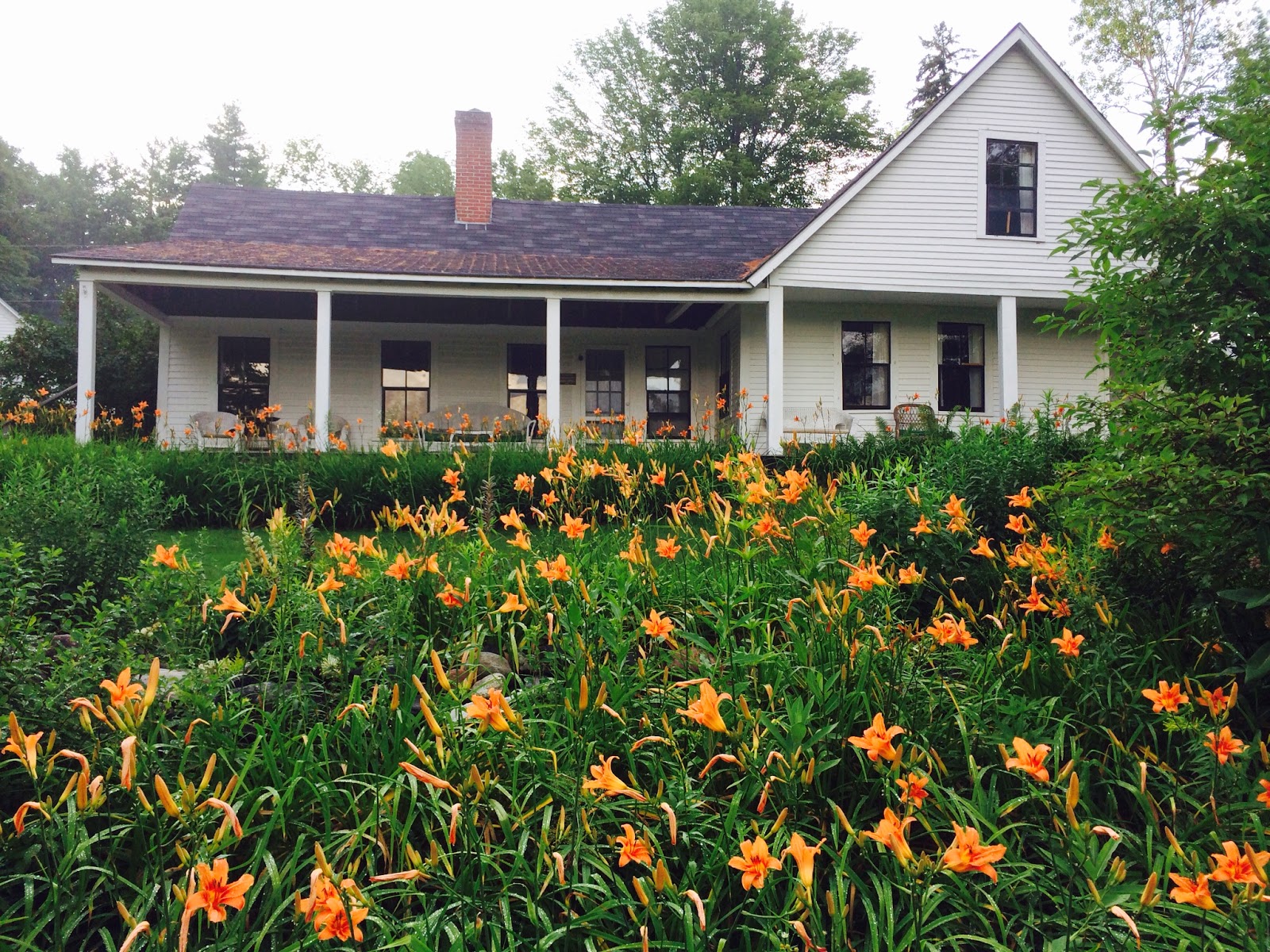 I knew I wanted to work on a new book while at TFP and that to do that I needed to see all the poems at once. When she showed me through the house, Cleopatra Mathis told me about how she had taped her poems up all over the walls of Frost’s house during her own residency in 1982. I was very excited when I saw what became my main work space in that house—a screened in back porch with a long conference table looking out over a sunset yard bordered by the woods. 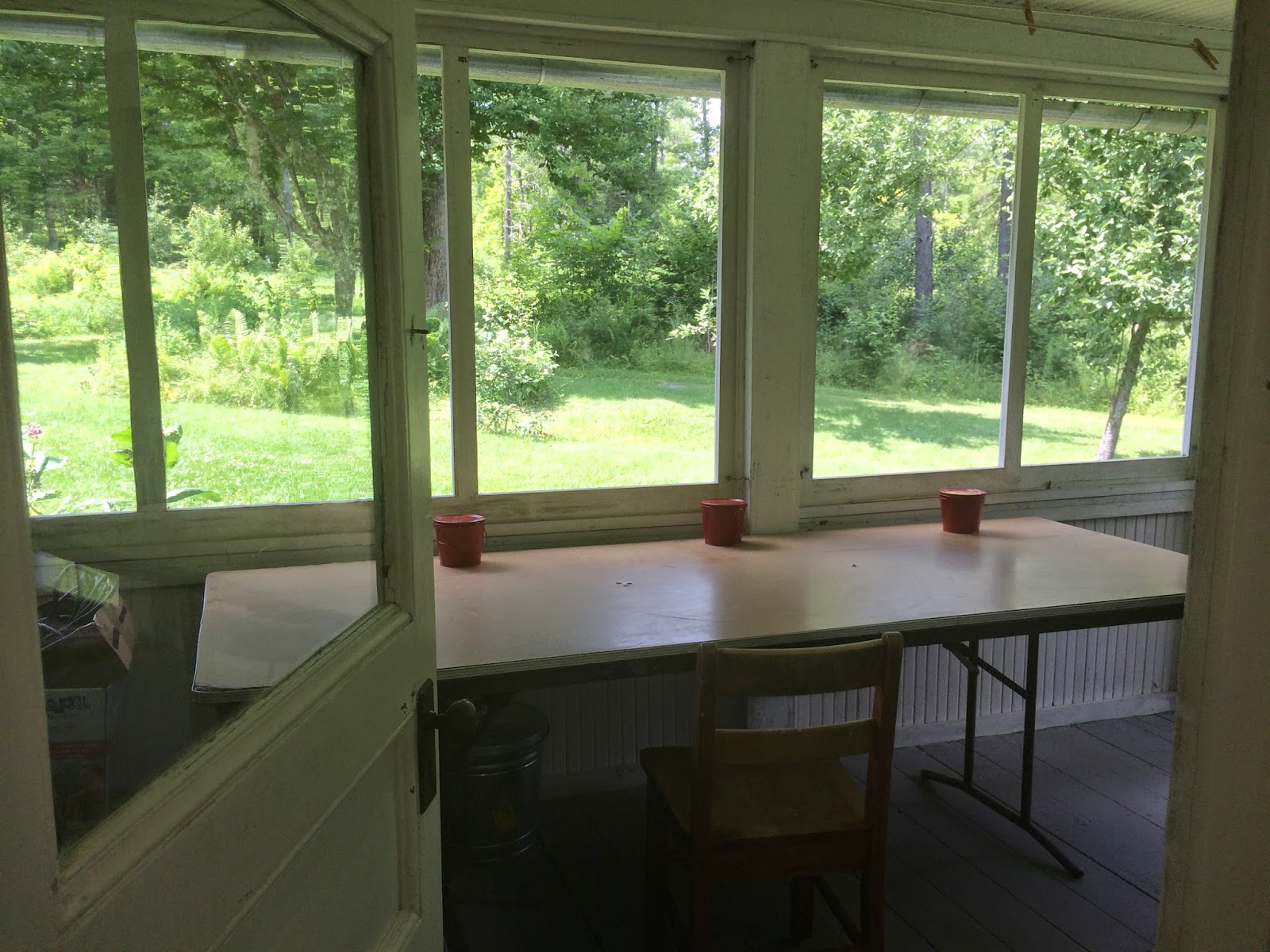 When the first table filled up with my poems, I set up a second one and it soon filled up too. One day I looked up and noticed two empty clotheslines and got the idea to do this:

Again, kinetic energy proved a source of inspiration, and it was also good for my back to be able to walk back and forth “editing” the book by unpinning a poem from one spot and moving it to the next. As at VSC, I found myself writing new poems while in the process of revising and sequencing older ones. Having nearly two full months alone with no responsibilities—except to the writing was amazing—so much creative space opened up! I remember feeling buoyant and emptied in a good way of the pressures of normal life, suspended in that timelessness a child sometimes feels. The Frost Place offers three vibrant poetry conferences every summer, in the fall takes applications for the next summer’s Dartmouth-Poet-in-Residence program, http://frostplace.org/

The MacDowell Colony  was more like VSC than TFP in that it offered a community of writers and artists (this one, about 30 people) I could join or take refuge from, exactly as I pleased. Meals were communal, and it was not just the wonderful food that trained me not to miss one—I quickly realized that the company and conversation of other artists abuzz about their projects fed my own work. As at VSC, I absolutely loved having a separate place—in this case a 1930’s era stone cottage in the woods—for my work. Once I crossed the threshold, I was all in. 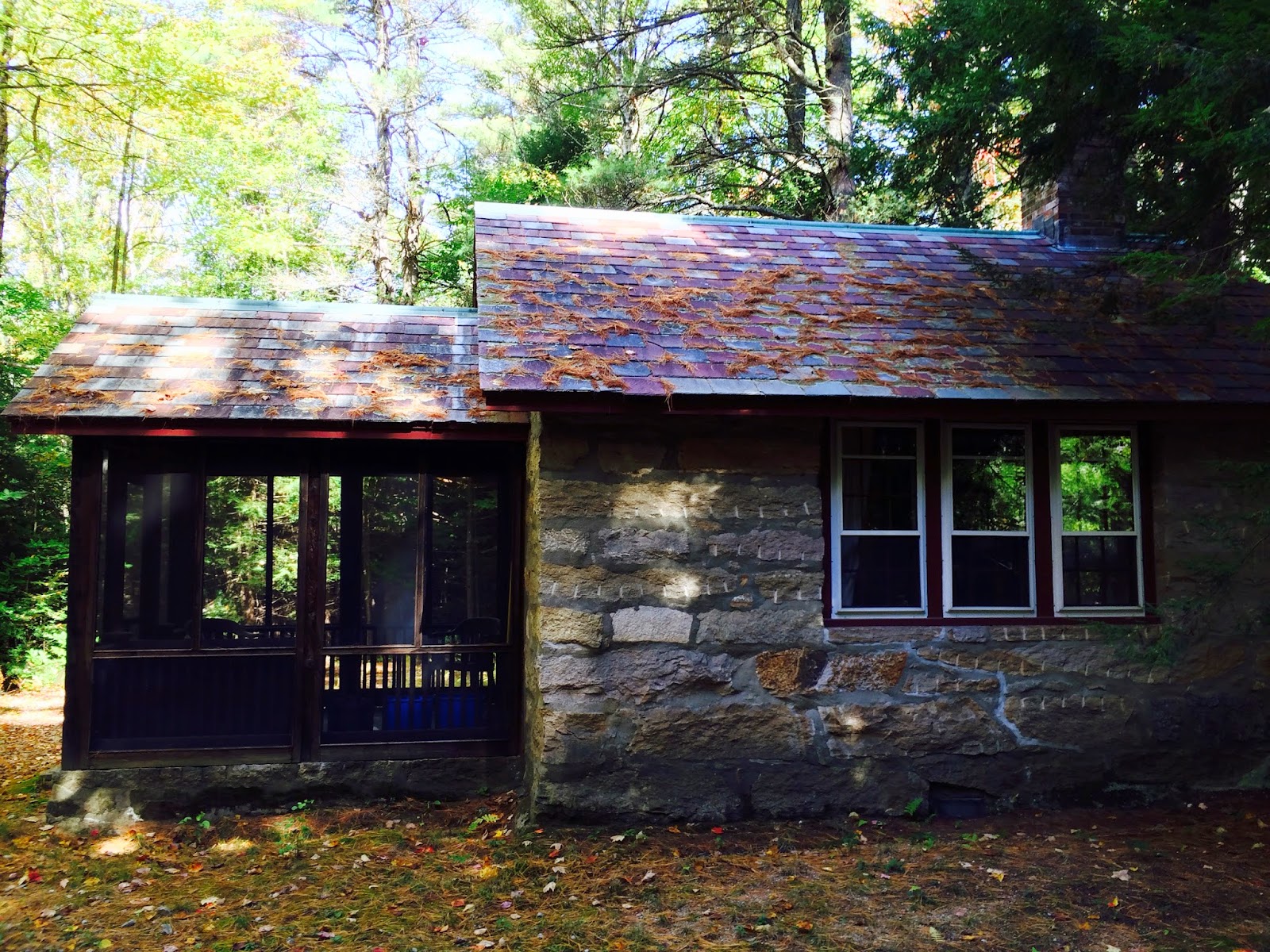 The walls of this cottage were bulletin boards, and I soon had poems tacked up everywhere as well as ranged in long columns on the rug laid before the fieldstone fireplace. That cottage offered the luxury of TWO desks, so I set up my laptop on one and used it for editing and on the other set up my notes and supplies for making notes by hand on a completely new project that I worked on in the late afternoons. When the light slanted in and touched that desk, I knew it was time to switch gears and work on the new project. 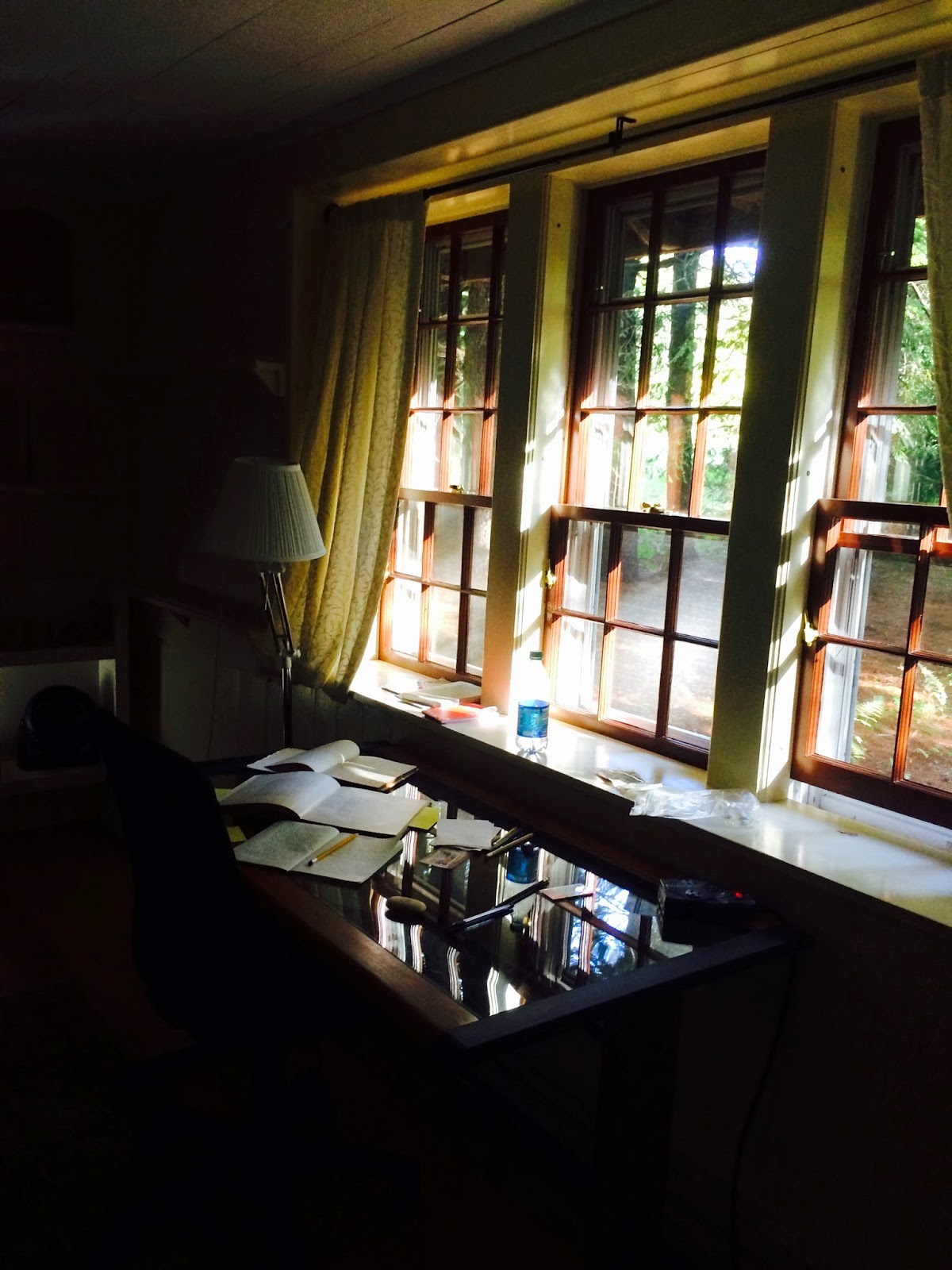 The MacDowell Colony takes applications for residencies that take place twelve months of each year, http://macdowellcolony.org/

I’m back home now in Northern CA writing at my desk overlooking a small garden vibrant with birds this time of year and with flowers and vegetables when the weather is warmer. Now that my husband and I are alone, a room as been dedicated as my office and for the first time in my writing life I have my books all around me on bookshelves and—this is the real key—a door that closes. It’s a great spot but I still find myself migrating back to places I used to write—the kitchen table, a local café, even my car. When I get stuck, I take a walk go for a drive, do a few yoga stretches. And now that I know the value of a writing residency, I hope to go to one at least every other year.
Posted by TNBBC Super Mod at 5:00 AM