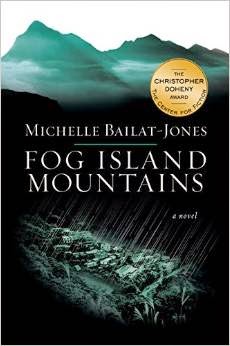 As I get older, more and more of my friends from high school, college and beyond are becoming authors.  This is always fun for me, and I love reading the books that come from the imaginations of people I've known in the past (in some cases as many as 25 years ago).  This year, it was a particular pleasure to read my friend Michelle Bailat-Jones' book Fog Island Mountains (Tantor Media, 2014).  The book tells the story of Alec Chester, a South African who emigrated to Japan decades ago and is married to Kanae.  The couple lives together in the fictional village of Komachi, in the nonfiction Kirishima mountain region of Japan known as the fog island mountains.  When Alec is diagnosed with terminal cancer, Kanae flees from him for reasons that... would give away some of the story, so I won't.  The book is beautifully written, capturing the delicate dance of Alec, Kanae, and their three children, and their reactions to Alec's illness.  The story is narrated by Azami, an old storyteller of Komachi who weaves Japanese mythological stories into the story of Alec and Kanae.  The result is a book you want to read slowly and savor, as emotionally rich as my own books are silly and fun.  Michelle's writing style is captivating -- she could rewrite the story of the three little pigs and it would become a work of art.

It's always a pleasure when you get to help promote a friend's book, but it's a privilege when the book is as well-written as Fog Island Mountains.  Do yourself a favor and buy the book, then curl up on a winter's evening with a blanket, your favorite hot drink, and indulge yourself in this lovely book.

Ian Doescher is the author of the William Shakespeare's Star Wars series.  His Shakespeare Star Wars prequel trilogy will be released in 2015.  Ian lives with his family in Portland, Oregon.
Posted by TNBBC Super Mod at 5:00 AM