ML Kennedy Recommends: A Night in the Lonesome October 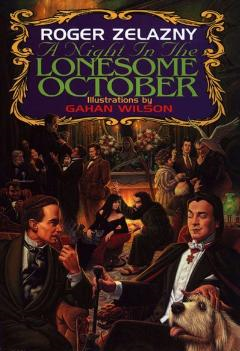 When I was thirteen years old, I wasn’t really sure what to read. I had read all the Hardy Boys Casefiles, all the Ramona Quimby, and few other examples from both sides of gendered children’s literature. I was ready to move on to more adult books. The problem was that most of them were not interesting to me. I read some Hitchhiker’s Guide and Earthsea and those were good, but not exactly what I wanted. My mom read stuff like Sidney Sheldon and Danielle Steel; pass. I tried some Stephen King, but was put off by the lengthy descriptions of small town life. Tolkien always bored me: lengthier descriptions of even smaller town life.

I was pretty desperate, and ended up reading novelizations of films I had already seen, re-watching Universal Monster movies and buying more comics and Mad Magazines.

Then I got one of those flyers in the mail. It was basically for one of those scam “twelve CDs for a penny” record clubs, except for books. It was in there that I saw A Night in the Lonesome October by Roger Zelazny. The book’s cover featured a guy who looked like Sherlock Holmes and a guy who looked like Dracula. I read the description, and holy shit, this is a book with Sherlock Holmes, Dracula, the Wolfman, a witch and Jack the Ripper.

I needed to join this club!

Fortunately, my mom remembered the hassle of the time I needed to join the twelve CDs for a penny club. Instead, we went to this giant new store called Media Play, and bought the paperback (and maybe a laserdisc too).

Basically, this book broke my brain.

I knew that it took a comics style approach of mixing characters from different books, but it was still the first novel I read that had ever done that. Larry Talbot and Sherlock Holmes were talking to each other!

The book was written in first person present tense; could you even do that?

Strangest of all, it was narrated by Jack the Ripper’s dog! It featured all sorts of talking animal familiars (in my head, purely kid stuff), but also unknown allegiances, occult rituals, killing and Lovecraftian horrors (seriously adult stuff). (Of course, being fourteen at the time, I referred to Lovecraftian horrors as “that weird stuff.”) (All these parentheses are next to each other; must resist urge to multiply them.)

It was kid stuff and adult stuff at the same time! It was like comics and had all the old movie monsters! This book was written just for me!

I read the A Night in the Lonesome October in two sittings, and hungered for the next Roger Zelazny novel. I checked the newspaper for new book releases, and never found another one. It wasn’t until years later in college that I learned that it was Roger Zelazny’s last book; he had died in 1995.

But what’s this? With this newfangled “internet” I was able to read all about Roger Zelazny. Turns out, A Night in the Lonesome October wasn’t really what he was known for. There were these things called “Amber” and Lord of the Light and Damnation Alley and thirty years’ worth of stories to discover.  I’ve spent the last fifteen years checking the “Z”s first in every bookstore I’ve encountered.

And my first book was written in first person present tense.

(ML Kennedy once punched a mouse to death, but then felt really bad about it. He has a blog where he writes stories in exactly 100 words. You can find out more about those and his slightly longer stories at wbxylo.weebly.com )
Posted by TNBBC Super Mod at 5:00 AM