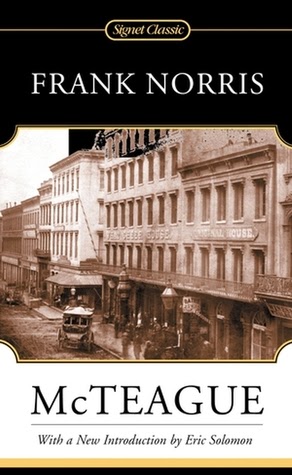 Why I recommend it: An enormous dentist who can pull teeth with his bare hands, his thrifty unassuming wife who has a sexual fetish for money, their love-struck elderly upstairs neighbors who sit on either side of a thin wall and listen to each other patter around their apartments, their former-heiress housekeeper who goads them into giving away what possessions she doesn’t steal outright, an alley-dwelling junk collector in search of a lost fortune in gold flatware, a winning lottery ticket, a gold rush, sex, squalor, murder, mayhem, a race through Death Valley… Need I go on?

Like a handful of other novels written around this time—Bram Stoker’s Dracula and Upton Sinclair’s The Jungle come immediately to mind, as does most of Jack London’s work—McTeague is deliciously sordid, adventuresome, and exciting. Norris’ prose is crisp and readable for the era and, as with a novel like Call of the Wild, it’s hard to put this book down once you pick it up. There are many ways to describe McTeague, but perhaps the most cogent for a modern audience is to think of it as a very early predecessor of Quentin Tarentino’s storytelling style. First, because it consists of equal parts quirky, hilarious characters finding their way into semi-absurd circumstances and reacting in wildly unpredictable ways, and second because the book itself is quite cinematic in its detail and pacing. It can’t decide what it wants to be; it starts funny, turns kinky, gets very dark, and then widens into a balls-out adventure tale, making the end product something far better than any of those taken on their own. It’s Amelie meets There Will Be Blood, and written by one of the masters of Naturalist prose whose scene framing and pacing could be dropped squarely into a film today and you’d never guess that it was 115 years old.

Best of all? It’s in the Public Domain. Download it for free at Gutenberg.org or listen to the free audiobook at Librivox.org.

Mark R. Brand is the two-time Independent Publisher Book Award-winning author of Long Live Us (2013), The Damnation of Memory (2012),Life After Sleep (2011), and Red Ivy Afternoon (2006). He is the short fiction editor of Silverthought Press and the editor of the collection Thank You, Death Robot (2009). His essays have appeared at Salon.com, The Weeklings, and The Good Men Project, and he is the creator and host of Breakfast With the Author.

Brand teaches English and first-year writing at Wilbur Wright College in Chicago and he is currently completing his PhD in English at the University of Wisconsin-Milwaukee.