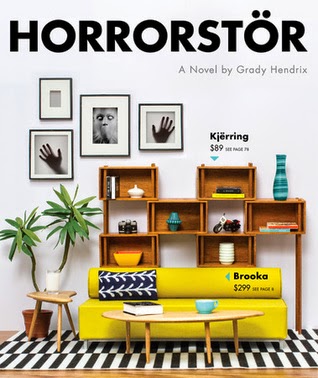 
The Short Version: Amy is an ordinary worker at Orsk in Cuyahoga, OH.  But this is no ordinary Orsk: the staff has been coming in in the mornings to find destroyed furniture and other creepy messes - and Amy, low man on the totem pole, gets tapped to stay overnight with her boss and another employee.  What ensues is a horrifying descent into near-madness.
The Review: Right out of the gate, we must address the physical object.  A friend of mine, after a rather awful experience with IKEA this summer, saw the book on my desk at work and had a minor freakout, thinking it was in fact a catalog for the Swedish retail giant.  And Hendrix leans in hard, right down to the color scheme and the almost-cartoon product graphics.  But he also saves himself from any sort of libel suit or anything by making his store a knockoff called Orsk.  Right there, in the novel, they acknowledge that it's a shoddy IKEA knockoff made up by Americans - and while that doesn't really do anything to shift you away from imagining IKEA the whole time, it's nice that he made the effort.
But I was actually surprised at just how... well, how traditional? I guess? the whole novel ended up being.  While Hendrix's story isn't terribly original or innovative, that's not really a bad thing. It felt, in some ways, as safe as buying a BILLY bookshelf: you know exactly what you're going to get and while it isn't the classiest or most sturdy of products, it will do its job damn well.   For one thing, I don't know anyone with an imagination who hasn't walked into an IKEA (or, hell, any big box store - classy ones or Wal-Mart, doesn't matter) and had some brief flight of horrible fancy about how scary the place must be at night and wouldn't it just be the perfect place for a hell hole to open up?  But Hendrix is the one who wrote it down first - and tapping into that sort of groupthink nightmare makes the book feel like a story you know, somehow.  That and his liberal use of horror tropes makes it pretty much exactly what you paid for - and that's the best part.  Things are so much better when Hendrix just leans into the scary stuff and lets it rip, instead of trying to do anything terribly new or philosophical.
I mean, sure, there are some gentle musings on some of the issues of these stores: the way they are designed to disorientate the shopper, the predatory methods the store clerks use to get people to buy, the sense of blurred voyeurism that comes from wandering through the store... the fact that the prison from whence the evil in the store originally came (previously on the site, knocked down, etc etc) was a panopticon feels like the sort of tidbit an undergrad could seize on to justify his stoned idea to write a paper about this book.  But, for my money, it doesn't really matter that much.  The evil's background isn't so terribly important, although it allows for some smart twists on the whole office-as-torture trope.  Instead, it's more fun to just sit back and let it be really unsettling when a hallway that can't be there appears - or when, out of the darkness of the unlit store, you come across a vision like Trinity on the treadmill desk...
The writing is not all that flashy and there were times when I felt like Hendrix almost could've gone a little further - really pulped up some of the scarier moments in order to make the reader really feel it.  Instead, the scares might give you a little tremor down the spine but they never quite land in the way that the premise dare-I-say deserves.  But I appreciated the fully realized characters.  Even as they settled into horror-story roles, they remained human for me - especially Basil and Amy.  Neither of them are particularly likeable, necessarily, but they aren't unlikeable either.  They are people stuck in a ridiculously freaky circumstance - both just the reality of their day jobs and the unreality of their long night in the store.   And the novel's end might actually be one of the strongest moments, on that note.  I won't spoil it, but I'll just say that it felt like the right image to end on - clichéd as it most certainly was.


Rating: 4 out of 5.  I mean, the design of the book alone is worth picking it up.  I plan to sit this on my coffee table with the most recent IKEA catalog maybe under it or something - let people not notice until they notice, you know?  And the team at Quirk did an amazing job making such a wonderful object.  But at the end of the day, the story inside is traditional.  That's not a bad thing, especially at this time of year - a good, rip-roaring horror story (not one that will give you nightmares like from Uncle Stevie, just a good couple of thrills) is sometimes all you need.  And dressed up like this, it could have been a lot worse and I'd still have had a ball.
Drew Broussard reads, a lot. When not doing that, he's writing stories or playing music or acting or producing or coming up with other ways to make trouble.  He also has a day job at The Public Theater in New York City.
Posted by TNBBC Super Mod at 5:00 AM