This is JS Breukelaar. JS lives in Sydney by way of San Diego. She has work published in Prick of the Spindle, Juked, Opium and Fantasy Magazine, among numerous others, and included in the anthology, Women Writing the Weird. Her collection Ink came out in 2012, and her first novel, American Monster, is out now from Lazy Fascist Press. 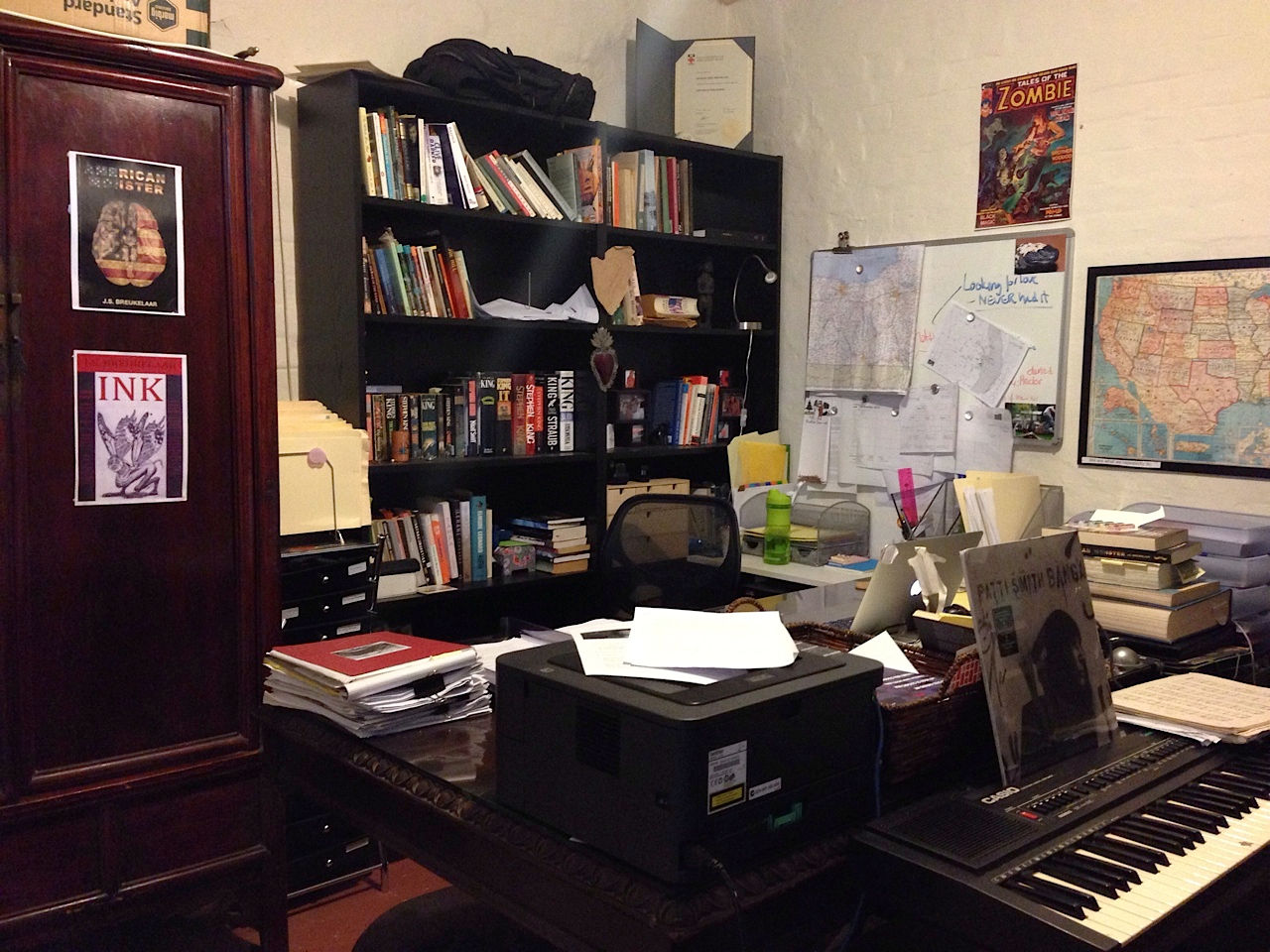 So this currently is my office. I know how lucky I am to have one. A room with an actual door you can open and close. These are IKEA bookshelves I got for my last birthday and I’ve almost unpacked all my books. I’m lucky the dining table that I use for a desk is so huge because I mark papers on it, write on it, run the household from it. I play some piano but we don’t have one now, so I commandeered this keyboard which allegedly found its way into our home from my son’s high school. I’m a Patti Smith nut, so my daughter bought me Banga and I use it as a music stand.

Before I took over this room we tried to use it as a dining room (it didn’t really work, kind of a Mad Hatters Tea Party feel to it) and before that it was one of the rooms in the flophouse that this place used to be. We got it cheap and have converted most of it into a family home. This room, not so much. It was probably the original kitchen in the house, which was the first one on the street back in 1860. It’s so small that the only way we are ever going to get the huge oak dining table and sideboard out is to knock out a wall. It is a very strange space to work. It has seen a lot of history. We met the little dude who lived in this room. He cooked on a battery stove and grew chick peas in pails. The room doesn’t have any windows unless you count the old kitchen window that once probably overlooked a vegetable garden and which now looks into a bathroom the slumlord added on later. We nailed this bulletin board over the window so I don’t have to watch people on the toilet and I have my headphones so I don’t have to listen to them. The window thing was very important to me until I moved my office in here. But now I have maps instead. Lots and lots of maps. The walls are so old and damp that the maps periodically fall crashing to the floor. Ominous, right? 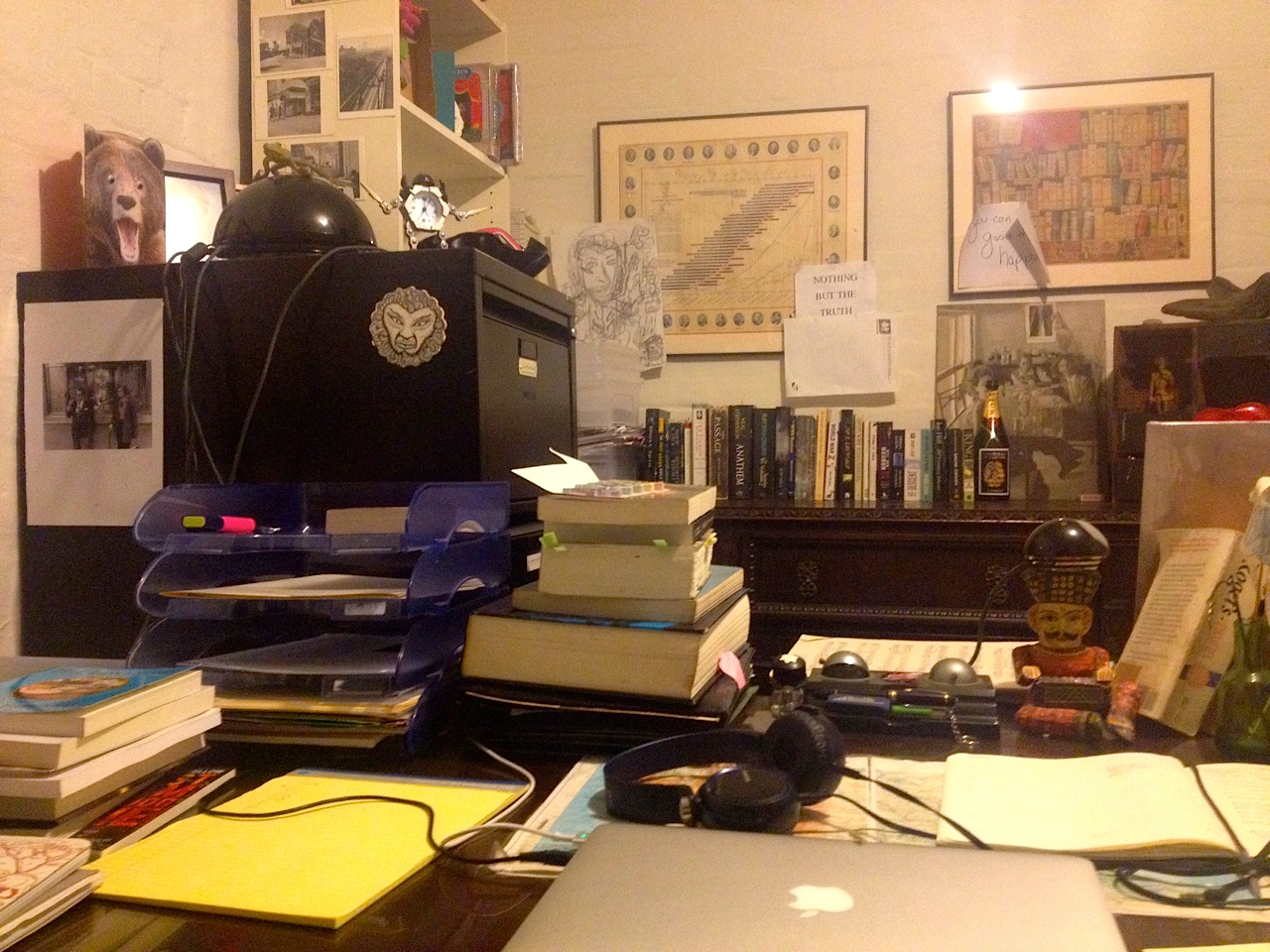 Above my desk are some black and white postcards which an editor mailed to me as consolation for a rejection. It was also my first submitted short story, so to have someone go to that kind of trouble, to send me those postcards, meant that I was in good company, that these were my people and I better get some stuff out there, so I did. I also have about a hundred pictures of my kids and lots of art and photography by friends and family, including this print of a photograph by my great friend, agent and mentor, Matt Bialer, whose New York pictures wowed me and still do. There is also a Lion Man coaster which my son made in honour of the title of my first published story. 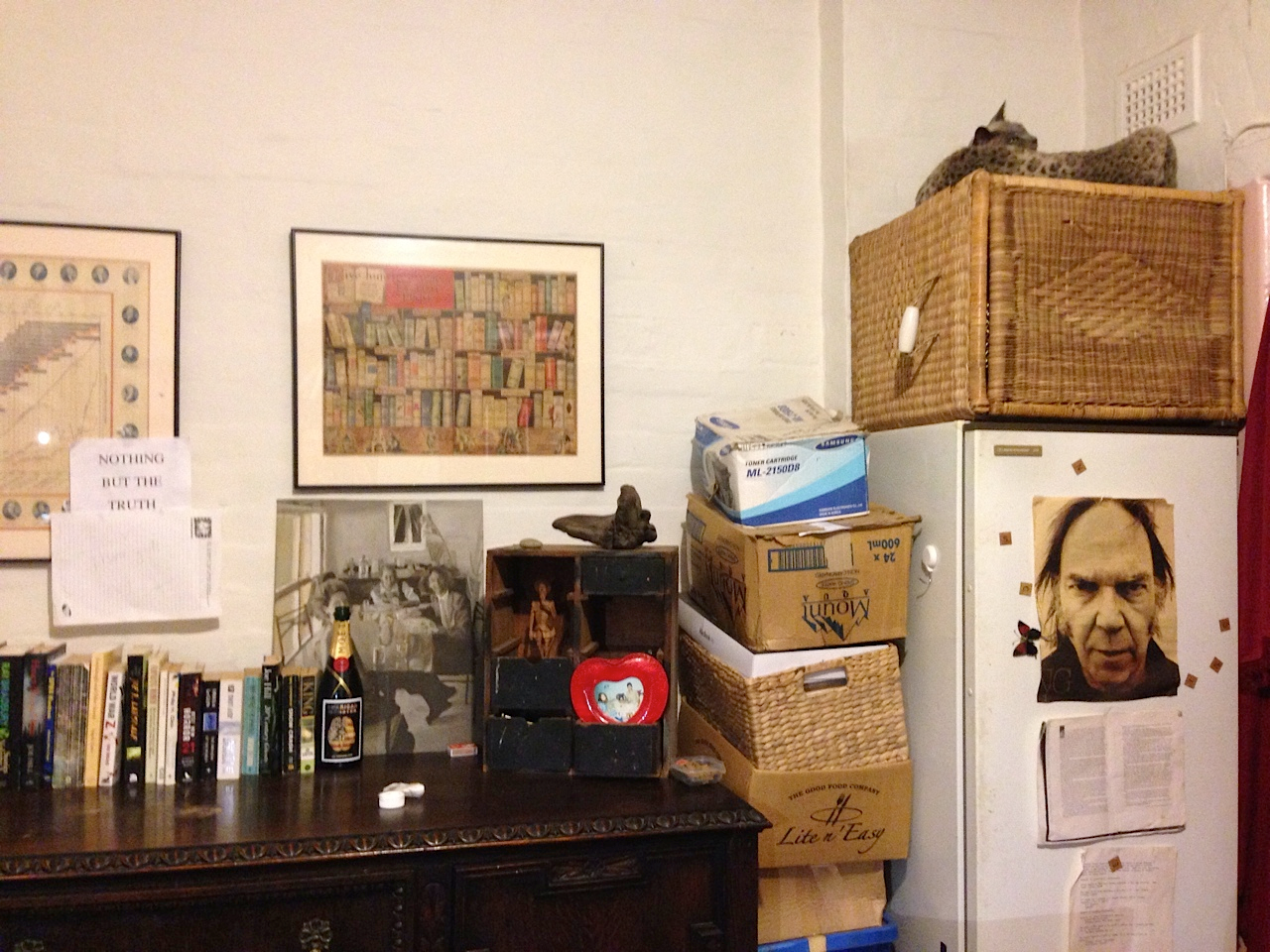 Along with several pieces of oppressive furniture I share this tiny space with Don Quijote, Neil Young, my cat Starvin Marvin who rules from on top of the freezer—I mentioned the freezer, right? And also my Staffordshire Bull Terrier, Eric, who sits at my feet.

On the wall above the sideboard are two 1950s-era posters I found in my grandfather’s attic in New York. The one on the left is called USA At a Glance, the Authentic Presidential Chart and it stops at Eisenhower. The one on the right is called Five Hundred Years of English Prose, and it’s very cool, much as my grandfather was. He taught me to read, I mean to really read, got me hooked, and I worshipped him in the way of an addict to the pusher man.


I always kind of muster the books I’m going to need for a course I’m teaching, or an article I have to write, separate them out from the pack, kind of let them know what they’re in for. So these books on the sideboard are for an upcoming Science Fiction course. Propping them up is an empty bottle of American Monster Edition Moet Chandon, courtesy of my husband. 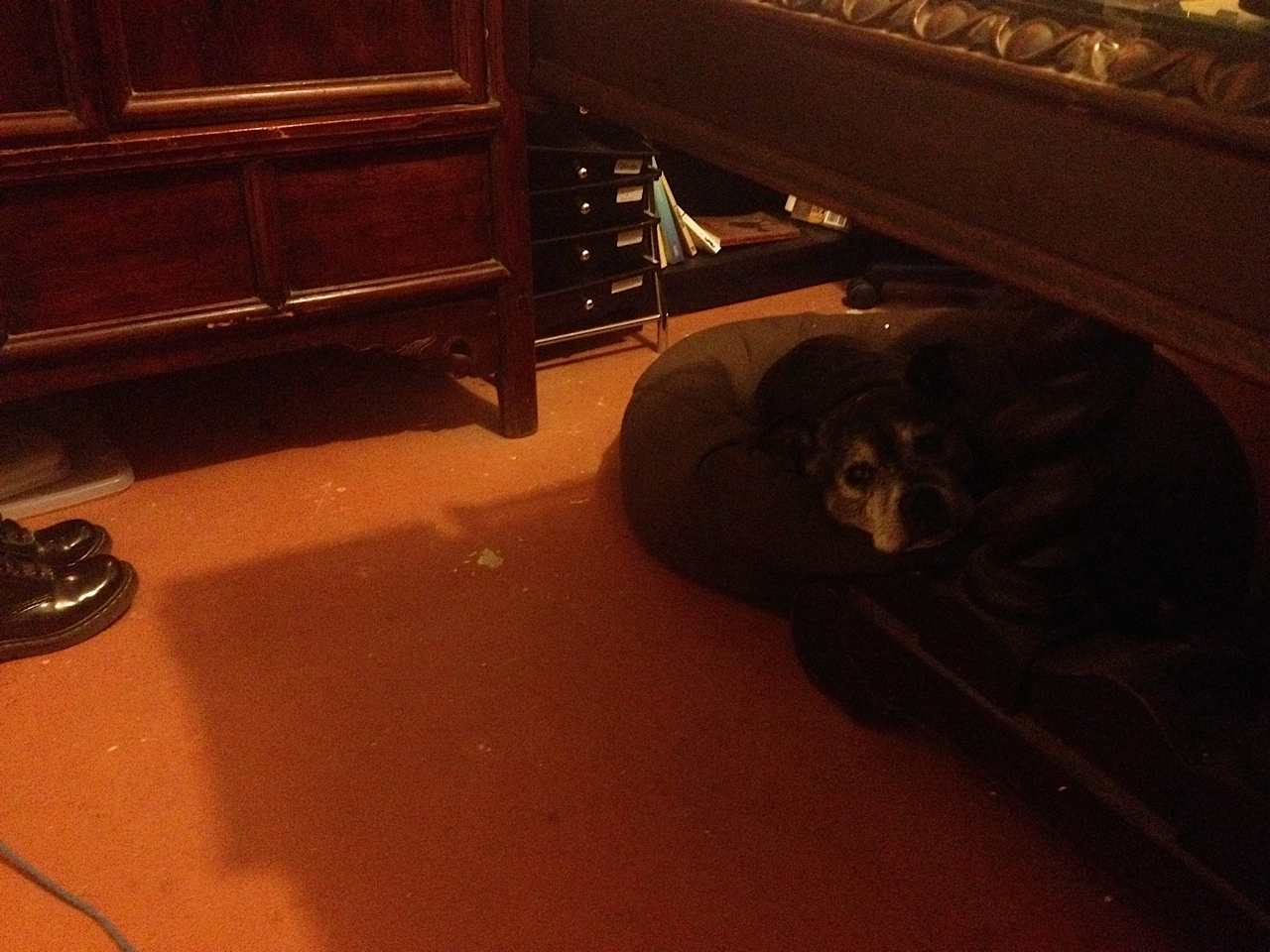 Sometimes it’s all too much, I feel weighed down by the unknowable history in the room, the complexity of it all, the maps to no where. Not to the mention the wheezing farting animals and the running toilet, and I have to throw my laptop under my arm and go write in a coffee shop. Where there are real windows. One of my favourites is a local joint we call Scrambled Lesbians, because it’s run by lesbians who do an all-day breakfast—it’s actually called Scrambled—and who pull the badassest expresso and that’s it. No cakes or muffins or artisan banana bread. Fresh juice pressed from slightly limp-looking produce. Woe betide should you be on the phone while placing your order or paying the check. Kind of like an alternative and much more joyous Soup Nazi. And they play an incredible mix at just the right volume to help you focus on the one thing, that one story or chapter or article, as if its the only one. Because it is.