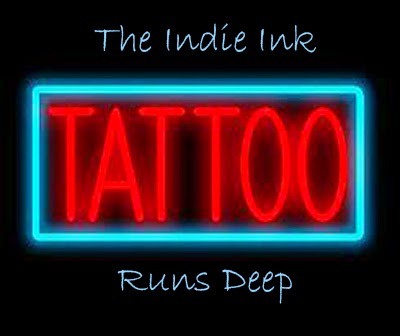 Today's ink story comes from John H. Matthews. John is a Chicago-based writer who has worked as a cigar store clerk, office equipment mover and academic library specialist. As the “M” half of the comic “A.M.” he drew artwork for the Evanston-based monthly, Strong Coffee, also contributing his short stories. His writing has appeared in anthologies and several literary magazines, including Wisconsin Review, Pindeldyboz, Opium Magazine, Word Riot, 2nd Hand and others. He is the author of This is Where it Gets Interesting. 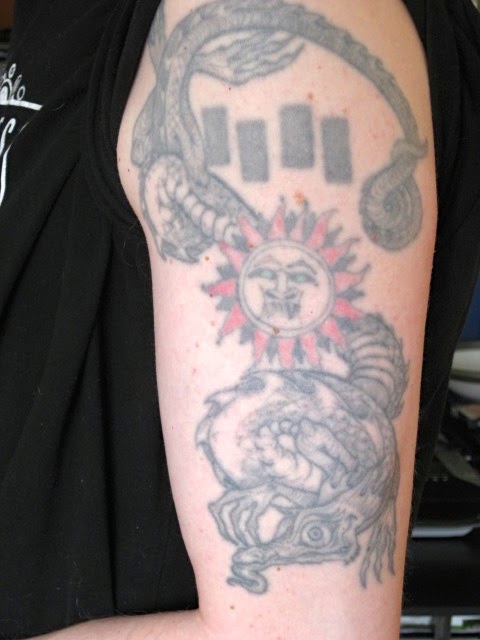 Can Pink Floyd and Black Flag live in harmony?

They did, for a while anyway, on my left shoulder as an unlikely tattoo.

Long a fan of Floyd’s moody songs of alienation, sometime in 1987 I discovered punk music and jumped in with both feet.

Floyd lost the turntable war to Flag and my hippie hair got cut. I had quickly found my way to the most scathing of L.A.’s hardcore offerings.

Maybe as a way to temper the leap into tattoos and punkdom, or possibly to ensure my literary, more sensitive side was represented, I went to Floyd’s last album with Roger Waters to a song called “Two Suns in the Sunset”.
The last lyric on The Final Cut goes: “Ashes and diamonds, foe and friend, we were all equal in the end.” It was a song about nuclear war and the end of the world. Also perfect!
“Equal In The End” would be inked onto my shoulder above the Black Flag bars in an arch.
First tattoo facts: Tattoo done by a guy named Ray. Fifty-dollar job. Easyriders magazine in the waiting area. Authorized by utilizing a fake ID (I was only nineteen). Pain was not bad.
For tattoo number two a year later, I chose an Aztec sun design because I am deeply into Aztec history and culture. No wait! That’s right . . . it was because I was digging Henry Rollins at the time and decided to get a version of the sun that adorns his back tattooed on my arm.
Second tattoo facts: Work also done by a guy named Ray. Seventy-five dollar tat. There was a large snake in a dirty tank in the waiting area.
I spent a few years with my Black Flag/Pink Floyd combo, then the inevitable happened: Rollins’ neck began to resemble a redwood tree trunk from excessive weightlifting and screaming poetry, and I felt the need to distance myself from the man.
In 1993 I went in for a change, this time to a tattoo studio that featured fine artists: Guy Aitchison’s Guilty & Innocent in Chicago. Since Guy’s waiting list was explained to me as “Ain’t gonna happen for you, ever,” I chose a worthy backup, his apprentice at the time, Deborah Brody. After meeting with Deborah to explain that I wanted a dragon on my left arm, she looked at the rudimentary art already laid down and said, “OK, so we’re going over these, right?”
I quickly explained that I actually wanted to keep most of the existing tattoos and saw the dragon as sort of wrapping around them, connecting them as a whole. But what I did want covered up was that Equal In The End business. You see, even worse than walking around as miniature Rollins was explaining to potential girlfriends and drunk, sweaty skinheads what the words above the bars meant. I barely got past Pink Floyd lyric when eyes would glaze over and whomever I was speaking to would disappear to see if there was any more Budweiser left in the keg.
The dragon’s tail would curve over the bars and hide the phrase and I would be free!
Deborah dutifully drew up a design using my descriptor “bizarre” as her guiding light, and created what I still think is some kick ass art. The tattoo was done on a bitterly cold night in January. It was just Deborah and I in the shop, listening to the cool punk and psychedelic music emanating from her boombox as she worked. In the four hours, I think we took only one ten-minute break.
Third tattoo facts: Broke the Ray cycle. Total cost of the ink and labor: $200. Plastic skeletons in the store front windows and a shameful admission: I forgot to tip. It didn’t dawn on me until I was on the bus home that I’d stiffed her. Doh!  I blame the needles. I was loopy there at the end.

* * *
If anything is stopping me from having my now fading tattoos redone, or getting additional ones, it’s that I can always think of something else I’d rather have. I could get a new guitar for example, or a used guitar. I could get a new pair of hiking boots or a decent winter coat.
In the twenty-some intervening years since I became The Boy With The Dragon Tattoo, I have never once (as several friends have) received a tax refund and immediately converted it to ink. My feeling is that strong forces must compel you to climb into a chair and pay many dollars to have someone jam electric-powered needles in you and those forces, for me, have apparently left the building.
This doesn’t mean I regret the tattoos I have or would dissuade anyone from getting one, though. Faded though they are, I find my tattoos, even the old Black Flag art, comforting. Tattoos hammer down time. They stand to honor a life period as well as the moment of their own creation. Sailors used to call them “travel marks” for a reason. They show the world you went somewhere. You went somewhere and did something.
And there’s a practical side to tattoos as well, one you may not have thought of.


Long ago, upon hearing I’d gone in and got permanently scarred, my grandmother remarked, “Well, at least now we have another way to identify you should that ever become necessary.”
Posted by TNBBC Super Mod at 5:00 AM