This is Phillip Margulies.

He is the author of several books on science, politics, and history for young adults. He has won two New York Foundation for the Arts fellowships. He lives in New York City with his wife and two children. His novel Belle Cora just released yesterday. 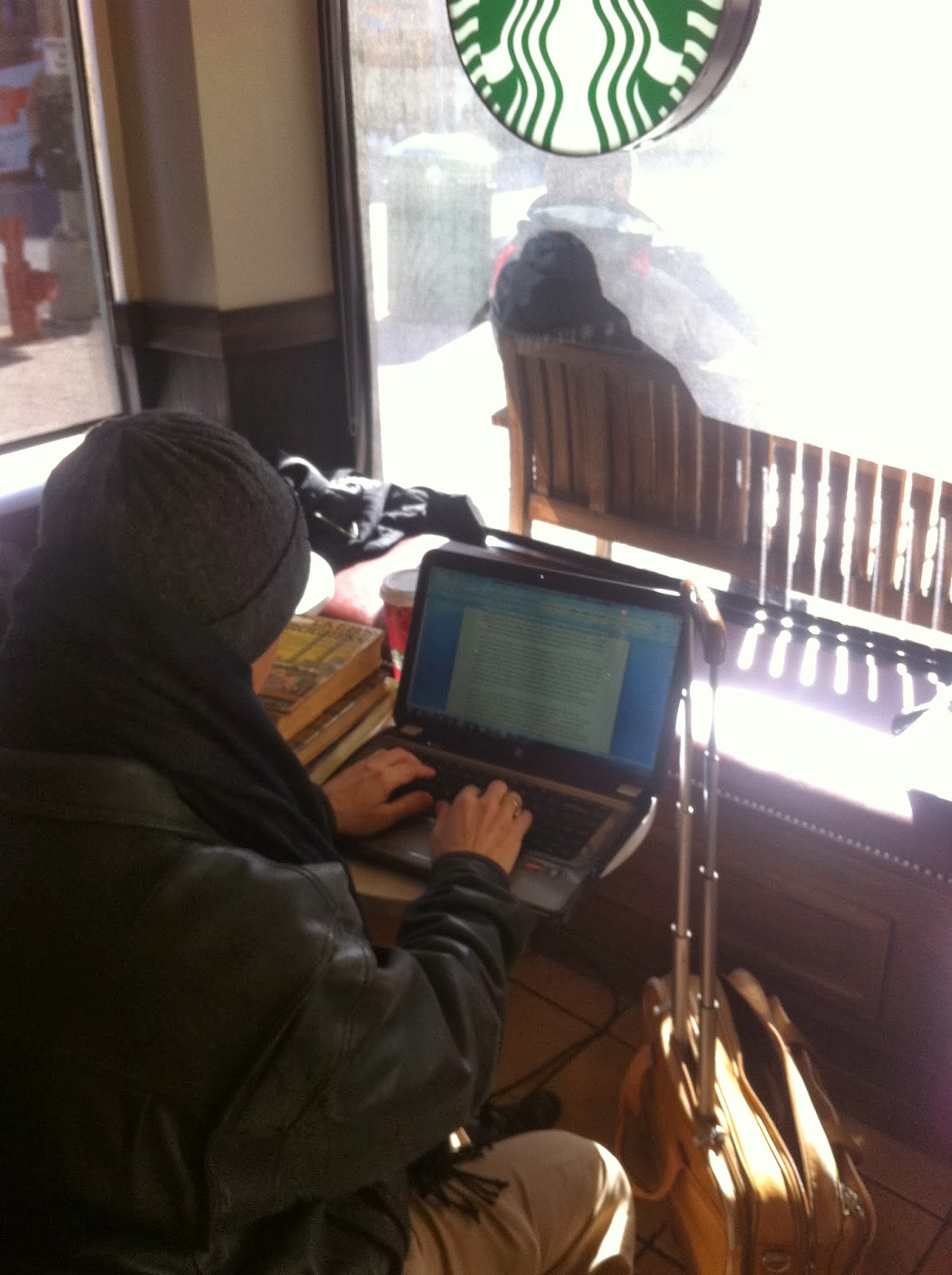 You should be able to write anywhere.  Alexander Solzhenitsyn wrote in a Soviet prison camp, with frozen nostril hairs and numb fingertips.  He wrote in microscopic print on toilet paper. When toilet paper was scarce he memorized scenes and dialogue to set down if he was lucky enough to survive the gulag. I remind myself of that whenever I’m about to complain that my surroundings aren’t inspiring.  Students of the martial arts must learn to break boards with their bare hands; writers should train to write in totalitarian conditions, believing that, if they are discovered, each sentence will add a year to their sentence.  Besides, thinking of your writing as a crime against the state is a good antidote to the more usual condition of everyone’s complete, withering indifference.

I don’t like writing in my apartment.  There are things begging to be cleaned and repaired; there’s a refrigerator full of food; it’s lonely. I create my masterpieces away from my home, washed over by wave on wave of strangers, or people I know slightly coming and going.  It feels like I’m writing on the back of an envelope in a quiet table for the least-favored guests at a wedding. I like to be the one still point, the person who overstays his welcome, at café’s, at diner counters, at Dunkin Donuts, on the subway, in the Hungarian Pastry Shop on Amsterdam Avenue, in train station waiting rooms. I feed off the energy of crowds, as rock stars and stand-up comics are said to, except that I need to be completely unnoticed by the crowd.  No place is so charged with this energy than the concourse of Penn Station. It’s breathtaking, apocalyptic; wherever I turn I glimpse people I’ll see only once, including the woman who would have been my wife if I had not met the wife I have.  The churning chaos brings me a strange peace and I can write.

I used to commute to such places the way other people commute to their jobs.  But it became impractical to throw away so much time, so for the last several years I’ve gone to the Starbucks on 181st Street about a block and a half from my house.  It was there that I wrote several nonfiction books, several unproduced plays, an unfinished novel about a detective with Asperger Syndrome, five unpublished short stories, assorted poems, songs, and eventually Belle Cora, which is not my first novel, but the first novel to be published after a half a century of writing amid swarms of people who did not care if ever wrote a word or had some other innocuous hobby instead.

Every morning I rose at 6:00 a.m.  I made breakfast for my son, who is autistic.  I made sure that he was combed and dressed and his fly was zipped and he had his homework.  I would wait with him for the bus to a special education school in Queens and while we waited we would have a highly repetitive conversation about plot and continuity problems in the original Pokemon TV series; shallow spots in the ocean which he had identified by means of Google Earth as good places to build artificial islands; which cities are antipodes of other cities; the coincidentally exact relationship between the distribution of the five black keys on the piano and the distribution of the months of the year that have less than 31 days; or one of his other obsessions at the time.  Then I’d go up the street to Starbucks where I would give my freshest hours to Belle Cora before switching to The Devil on Trial, which my wife Maxine Rosaler and I were finishing then, or to Nuclear Nonproliferation and later America’s Role in the World, two full-length nonfiction books which I researched and wrote while writing the first draft of the first half of Belle Cora.

I’m staring at the screen, and typing, and according to friends who’ve seen me at it, usually my lips are moving because I’m muttering the words.

Now and then, my diligence was observed by a young mother who would occasionally come in for her morning coffee, or would pass by the big plate glass window, on her way to catch a cab to her office at the William Morris Agency.  Whenever she passed Starbucks, she always seemed to see this bald-headed little Jewish man in his mid fifties feverishly typing and his lips moving.  The woman’s name was Dorian Karchmar.  Sometimes, on weekends, she would come in to read a fat double-spaced manuscript and mark it up in red pencil, and I would notice that.  We respected each other’s privacy and did not speak to each other.  However, one Saturday, Starbucks was very crowded and the only available seat happened to be at my table.  My young friend Maxim, the perpetual graduate student in philosophy, was there and he maintains that I would never have talked to her without his help, but I remember it differently.  Taking note of the manuscript and the red pencil, I asked if she was an editor.  She said, “I’m a literary agent.”

“Really?”—coolly, my heart beating like its trying to escape from my ribcage.  “Fiction?”

“Tell me a little bit about it.”

I told her that it was based very loosely, on a real life parlor house madam, that is on the keeper and owner of the fanciest brothel in San Francisco during the gold rush years, who became nationally famous for bribing the jury during the trial of a her gambler lover, Charles Cora.  Every book-length history of the city of San Francisco devotes a page or two to Belle because of her battle with the 1856 San Francisco Committee of Vigilance, which was formed partly for the purpose of lynching Charles Cora.   I told Dorian that the novel was written in first person as Belle’s memoir; that it took Belle from childhood to old age; that she was a strong character who had to be broken time and again to emerge stronger than before; and that I was sure it was the best thing I had ever done and I had felt inspired from the moment I began it.  She gave me her card and said, “Email me when you’ve finished it.”

And then we both went back to our work.  I was afraid Maxim was going to hit on her, which is what he does, and ruin everything.

From time to time Dorian would come in for her coffee and sometimes we would exchange a few words, sometimes not.  “How is it going,” she asked me sometimes.  “Almost done,” I’d answer, or “a few more weeks,” feeling that I was under a deadline and I was being negligent, and once she told me, chillingly, “Take your time: you’ve got one shot.”  Dorian has a tough side. I decided to revise the thing another time before I sent it.   Finally the exchange of emails began.  Her assistant read the first 75 pages and asked for the rest. He read it and liked it, and Dorian began to read it, and started to email me while she was in its first stages.  She wrote, “This is the best literary debut I’ve seen in years. Tell me a little bit about yourself.” I wrote back suavely; “I’ve been a debutante for many years now,” and I gave her a brief, guarded, strictly business account of my career.  In what struck me as a rather Hannibal Lectorish way she asked me for to be more expansive—she wanted me to be personal; she wanted to hear the pain.  So I supplied it— my brother’s suicide, my son’s autism, my father’s dementia.  At the end I apologized:   “Before I was too reticent, and now I’ve said too much.” “No,” she replied, “You haven’t overshared.”

Maxine read each of these emails and before I sent them we discussed them to death.  We lay in bed talking about them as another couple might discuss the possible outcomes of walking into the boss’s office and demanding a raise.

When she was about 150 pages into the manuscript Dorian began to report, “It’s beginning to drag, but I’m still reading.”

When she was done we met at Starbucks.  I was very nervous.  The following topics were discussed: good things about my novel, problems with it, my willingness to cut and rewrite; kinds of books Dorian liked, dismal state of the publishing industry that year; fate of my earlier novels, my possible contractual obligations to my present agent.

“We’ll take it step by step,” said Dorian.  Under her direction I spent another six months revising the novel before she said, “We’re ready as we’ll ever be.”  Only then did she send me a contract, and it seemed just a matter of days afterward that an editor at every publishing house in New York was reading my novel.

Last year, apparently under orders from corporate headquarters in Seattle, my local Starbucks was brutally remodeled, in an obvious effort to rid the place of marathon malingerers like myself.  The big wooden tables were replaced by tiny Italian-style marble tables with room only for one laptop.  Half the chairs were removed, replaced by a long cushioned ledge along the windows, which offer no back support.  The music became louder.  The selection became less intelligent.   The chairs which used to face every which way, encouraging conversation, all face the window and the street now, as if to say, “What are you doing cooped up in here?  Why don’t you go outside and play?” In what they probably think of as their masterstroke, it is always kept too cold.  That’s where they made their mistake, in my case.  They don’t know about my Alexander Solzhenitsyn fetish.  They don’t know what it does to me when you make it cold.  The colder it gets, the more I write.
Posted by TNBBC Super Mod at 9:39 AM