This is William Luvaas. William has published two novels, The Seductions of Natalie Bach (Little, Brown and Going Under (Putnam)--reissued as ebooks by Foreverland Press–and two story collections, A Working Man’s Apocrypha (Univ. Okla. Press) and Ashes Rain Down: A Story Cycle (Spuyten Duyvil).  His essays, articles and over 50 short stories have appeared in many publications, including The American Fiction Anthology, Antioch Review, Confrontation, Epiphany, Glimmer Train, Grain, North American Review, The Sun, Thema, The Village Voice and The Washington Post Book World.  He has received fellowships from The National Endowment for the Arts, the Ludwig Vogelstein and Edward Albee foundations, and has won Glimmer Train’s Fiction Open Contest, The Ledge Magazine’s Fiction Competition, and Fiction Network’s 2nd National Fiction Competition.  He has taught creative writing at San Diego State University, U.C.-Riverside and The Writer’s Voice in New York and is online fiction editor for Cutthroat: A Journal of the Arts.  He lives in Riverside County, CA with his wife Lucinda, a painter and film maker. 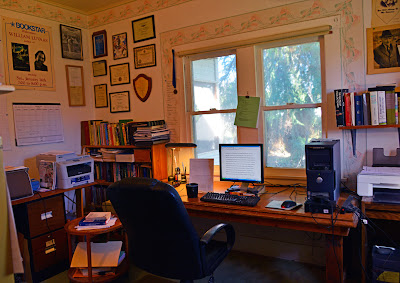 Where we write at once raises another question: how we write.  What are our writing habits and idiosyncracies, one could say “necessities”?   I believe it was E.M. Forster who couldn’t get to the desk until he saw a car with a certain combination of letters and numbers on its license plate pass by his flat.  Toni Morrison is said to light candles before taking up the pen.  I have a California  friend who can only write in Mexican cafes.  I myself must take a cup of coffee to the desk with me, morning or night, my writerly addiction.  If we ever have a coffee drought I am finished.  Are these just silly talismans or do they help us establish a comfort zone?

My studies are always cluttered places: books, files, computers, magazines, notes, wall charts, a manuscript closet stacked floor to ceiling with drafts (and too many unpublished novel manuscripts).  My desk is a chunky, hand-made six foot slab fashioned of an antique door covered by a sheet of shellacked particle board.  I favor windows looking out on nature, reminding me that I am part of a bigger whole.  From my current study I can see the San Jacinto Mountains through lacy foliage.  I once built a study in the attic of a house in the Adirondacks and cut a window to look out over farmlands below and hills opposite, opulently green in summer, snow covered mid-winter (20 below zero outside).  I was always cold and felt intimidated sitting on top of the world in my icy aerie, but got lots of work done.  Only while living in Brooklyn did I turn my desk from the window to stare dumbly at a wall.  (Though walls can be useful; Faulkner wrote notes for A Fable on a wall of his study at Rowan Oak.) 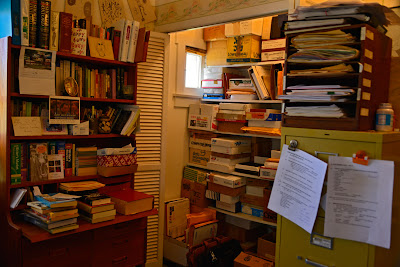 I don’t write well outside of my sanctum.  The desk is too small, the light isn’t right, I don’t have a scrap of paper I scribbled a note on and I am lost without it.  The smell is wrong.  The strange bare room doesn’t speak to me–or speaks in a stranger’s voice, while my own whispers away through the floorboards.  Public spaces are out of the question.  Solzhenitsyn requires “peace and space” to write, and I suppose I do, too.  My study is my adytum, my small, isolated, wholly individuated space away from the world which helps me find the perspective and confidence to write about that world.