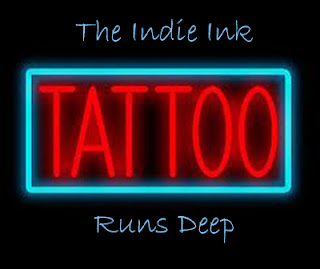 Today's indie ink is from Katherine Scott Nelson.  Katherine Scott is the author of the Lambda-nominated novella Have You Seen Me, published by the Chicago Center for Literature and Photography. Hir work has also appeared in Fiction at Work and Confrontation. Ze is bowing to peer pressure and writing about hir gender. 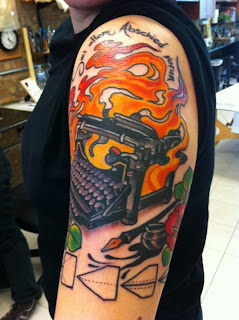 The words came first: SEI ALLEM ABSCHIED VORAN. Let me warn you right now, if you are going to get a phrase in a foreign language tattooed on you, you had better have an easy-to-grasp translation handy. I spent six months trying to explain to strangers in bars and parks and grocery stores just what "Be ahead of all parting" means, who Rainer Maria Rilke was, and what it had meant to have someone tell me to be a ringing glass that shatters as it rings. I started whipping out my phone and looking up a translation of Sonnets to Orpheus 2.13 to hand to curious people, because it was often faster. Now I just tell people that it means "Quit your job and be a writer."

A year and a half later, my first book, Have You Seen Me, was getting published. I'd kept the faith and done the work, and it was finally paying off. Since this was only going to happen once in my life - this momentous movement from "unpublished writer" to "published writer" - I decided to add to the tattoo to remind myself that I had done it.

I took the idea of a quarter-sleeve focused around a burning antique typewriter to Jason Vaughn at Deluxe Tattoo in Chicago, who does incredible things with color and line and composition, and who I could not recommend more highly. Did it hurt? C'mon. I sweated way more blood writing the book.

I love this tattoo. I plan to add to it every time I have some major success as a writer, so that when I'm 80, my left arm will be covered in a full sleeve of authorial bad-assitude.

However, there has been one unintended consequence to getting this tattoo: people have started giving me antique typewriter parts as gifts. My dad even snagged me a real Underwood at the Tempe Swap Meet.
He thinks it still works. He thinks I'm going to disassemble this oily mess in my 300-square-foot apartment to find out.