This is BJ Best.

He is the author of three books of poetry: Birds of Wisconsin (New Rivers Press), State Sonnets (sunnyoutside), and most recently the video game-inspired prose poem collection But Our Princess Is in Another Castle from Rose Metal Press. He teaches at Carroll University and lives in the Wisconsin countryside with his wife and son in the house in which he grew up. 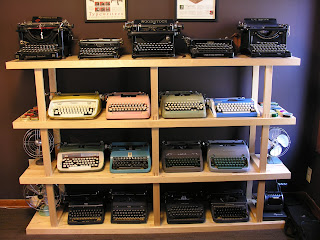 Several years ago, I fell in love with typewriters.  I’ve written a whole essay about my quest to collect them, available online (link: http://site.xavier.edu/polt/typewriters/best.html).  About seven years ago, my wife and I repainted and recarpeted a spare bedroom in our century-old home for use as my office; we bought some shelves, I displayed my collection, and it has hence become formally known to my family (including my two-year-old son Henry) as the Typewriter Room.

I used to love pounding on keys, fiddling with ribbons, and x’ing out wrong words—it was so counterculturally anachronistic.  I’ve written with typewriters in dining rooms and bars; on decks, picnic tables, and boats; in my office at school and in the middle of a river.  The very first poems of my recent book were written on typewriters.

And then I stopped.  It began to feel like I was prizing style over substance, attention to the act of writing rather than to the words written. 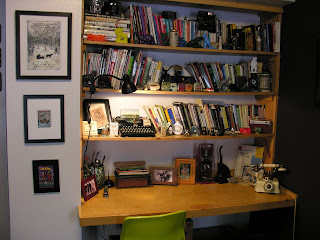 But still I had a room full of typewriters, and had slowly begun to accumulate flotsam that would mark me as twee, pretentious, and hipsteresque.  Antique cameras.  A vintage microscope.  A menagerie of Mold-A-Rama figurines from the Milwaukee County Zoo.  A transistor radio from the sixties, a silver dollar from 1881, a fossilized fish from the Middle Eocene.

There’s still a part of me that wakes up every morning a bit amazed I’m a poet with several books and that I teach college English for a living.  My undergraduate majors were actuarial science and finance.  I suppose I’ve outfitted the Typewriter Room like the scene of a play:  this is what I imagine a writer’s studio looks like, so I guess writing should occur here.  Henry’s favorite typewriter to bang upon is a Oliver #9 from 1916, but he prefers racing Hot Wheels, which began as ironic showpieces from my childhood and are now his bona fide toys. 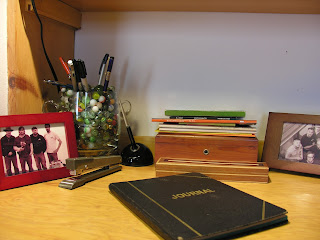 We learn what matters, again and again.  Now I write first drafts longhand in a journal, and tap them into a laptop thereafter.  My actual view while writing is more or less a blank wall.  I’ve given my various talismans their power, their position, and their say.  Thus established, I can move past them and get to the real subject, to the unglamorously fundamental pen and page.

I write in a museum, ultimately, so I can ignore it.

Check back next week when Sofia Samatar shows off her writing space.
Posted by TNBBC Super Mod at 6:23 AM