This is Joyce Hinnefeld. Her work has appeared in a variety of literary and scholarly publications, and her short story collection, Tell Me Everything and Other Stories (University Press of New England, 1998), received the 1997 Bread Loaf Conference Bakeless Prize in Fiction.

Her novel In Hovering Flight was the Booksense/Indie Next #1 Pick for September 2008. Her novel Stranger Here Below was published in the fall of 2010. She is the recipient of a Christopher Isherwood Foundation Fellowship and is the Cohen Chair in English and Literature at Moravian College in Bethlehem, PA.

The subject of where I write is a fraught one for me. I seem to be perpetually dissatisfied with my writing space, wherever it is, and not for particularly good reasons. Here’s a photo of my main workspace, which occupies part of a room in our house that we refer to as my study--though it’s also the guest room. 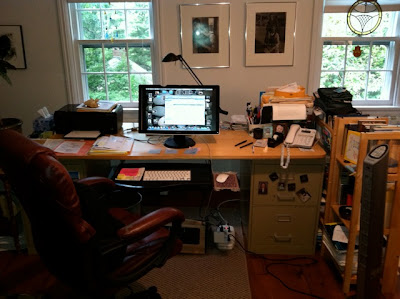 You can see that there are two windows looking out on a lot of green, some photos of my daughter, bookshelves, files. On the wall are photographs from Mexico by a photographer named Ron Terner and a nice black-and-white portrait of my husband by photographer Karen Tweedy-Holmes. Behind that big Dell monitor is my beloved MacBook Pro. I set up the monitor, and the Apple keyboard on a lower tray, and the chair with the back cushion, two years ago, when I had an unhappy incident with a herniated disk and decided I needed to create a workspace that would be easier on my back.

So what’s to complain about, right? Well, I wrote a blog post on this topic, or sort of on this topic, last spring (see http://strangerherebelow.blogspot.com/2012/03/my-writing-process-and-my-beautifully.html). Actually, that post was about giving writing advice, and specifically about my own “writing process.” In discussing my own writing space, I referred to my inability to keep my desk cleared of

notes about my daughter’s camps, school field trips, acting and dance and music classes and lessons and performances and recitals; printed email messages (because I’ll never remember them otherwise) and so on from people I need to write to, etc., as part of promoting my novels; receipts; bills; more printed emails, etc. related to my teaching; recommendation letter requests; coupons; publishers’ flyers about books I need to order; tape paper clips a phone nasal mist a camera old printer cartridges notebooks files and a ridiculous number of books, most of which I looked a little something up in, six months ago or more, for the novel I’m working on and which I can’t bring myself to return to the library because what if I need to check one more thing?

I’ll confess that I cleaned the desk up a bit for the photo above. But a lot of those things I mention in that breathless list are still there.

For a while I wrote at this little table in our tiny enclosed porch during the warmer months: 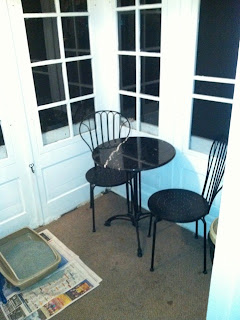 But then we moved the cat litter box out there.

Eventually, when I felt like I couldn’t bear the clutter of my desk any longer, and that I had to have a clearer space for writing, I reclaimed a little alcove in “my study” (I forgot to mention that for a while my study/the guest room was actually my study/the guest room/my daughter’s play room). This alcove had been filled with my daughter’s toys and drawings--mostly things she’d outgrown some time before. I moved those things out, and at first all that I had in that alcove was a nice, empty table. But now it looks like this: 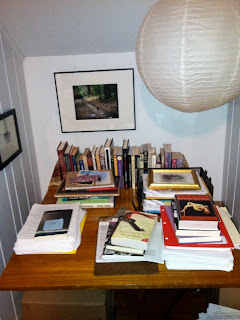 More books have moved in, as you can see, all pertaining to various writing projects. Also a lot of manuscript pages (there’s a big stack below the table that you can’t see in this photo). I love what I have on the wall here, all images of birds, including two crows and one thrush, and, in the largest image--the photograph on the back wall (a piece called ‘they wondered where the path would lead” by photographer Krista Steinke)--two more crows, these following two children along a country road and consuming a trail of Wonder bread slices.

My husband Jim, daughter Anna, and I spent a sabbatical semester in Santa Fe, New Mexico back in 2005, and I wrote a good bit of my novel In Hovering Flight in the reading room of the Santa Fe Public Library. I wish I had a picture of that room, with its old leather chairs and its lifesize horse statue and the homeless guys dozing over newspapers. I love libraries. Here is my local public library, in Bethlehem, Pennsylvania . . . just because:

When the clutter, or the noise, at home gets to be too much, I sometimes write in a study carrell at Reeves Library, the campus library at Moravian College, where I teach. I’ve been fortunate to share this small, enclosed study with my friend and colleague Theresa Dougal for many years now. I don’t think we’ve ever been in there at the same time; when Theresa’s not there, sometimes I peruse her various books on Mary Wollstonecraft. Here’s a picture of my delightfully spartan study carrell desk in Reeves Library: 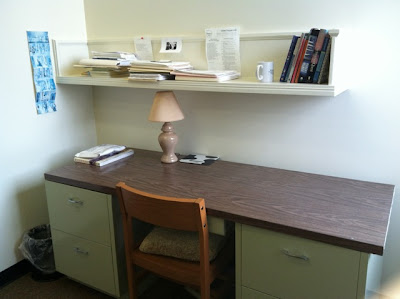 Last fall, when we had a freakish snowstorm two days before Halloween and lost power in our neighborhood for five days, Jim, Anna, and I spent a couple days together in that study carrell, reading and staying warm and charging our various electronic devices. Did I mention that I love libraries?

As I get older, I’m realizing something about myself. For a long time I thought that what I wanted and needed was a space in my life that was free of clutter, someplace clean and white and vaguely buddhist, with nothing to distract me from the purity of my own work. But I’ve noticed that no matter how many times I try to create such a space, I always seem to end up filling it with more stuff. I’ve also noticed that, instead of cleaning up my old spaces, I just keep adding new ones. Eventually I’ll run out of spaces to fill, of course. And I’ll have to follow my own advice in that blog post, where I admonished anyone who was reading it just to “shove the crap out of your way, and get your ideas down.”

In other words, learn to write wherever you are. I think I’m getting there, slowly.

Check back next week when we take a peek into Robin Lamont's writing space.
Posted by TNBBC Super Mod at 5:00 AM