Audioreview: The Walking Dead: Rise of the Governor 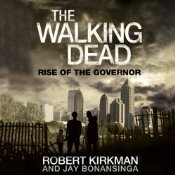 I am a total sucker for "companion" reading. Once I get hooked on a tv series, sitting around each week waiting for it to run on its scheduled night soon becomes unbearable. Like a junkie with no idea where my next fix will come from, I seek out ways by which I can keep the buzz alive.

I first remember doing this with The X-Files and a few of their "companion guides". It wasn't exactly what I was looking for but I do recall it calming the cravings between episodes. The next series I went die-hard on was Lost. Lost was a book lover's dream. I came to the series a year late, but caught up on the entire first season in a sleep-deprived, feverish mad rush three days before the second one premiered. Not too long after, I nearly died and went to heaven when I discovered the Lost Lit List, realizing the show was based loosely on and influenced highly by tons of incredibly smart and strange books. Hence the birth of my Flight 815er's Goodreads group. Mythology to discuss and books to read?! Both of these elements were welcome additions to the way I experienced the show. And yes, looking back, I see that I may have taken things a wee bit too far with that one. And no, I'm not sorry.

So now, here we are, three seasons into AMC's The Walking Dead, and I'm starting to feel those same awful stirrings all over again. My co-workers are getting sick of talking to me. My oldest called it quits when Dale died and my husband just isn't getting into it the way that I am. And when I found out that the show was taking a two month "mid-season break", I admit it. I started to freak. But someone, let's call him The Walking Dead God, was looking out for me, because while I was wandering the audio bins at my local Book Warehouse a few weeks ago, I stumbled across Rise of the Governor.

Now, yes, I know there were a gazillion TWD comics before the tv series came out, but I'm not really a comic book reader. Something about the whole "cartoons smooshed consecutively into small panels, some of which might contain words, some not" turns me off. But we'll come back to this in a minute. I promise.

Did I mention how crazy the timing of this whole thing is? I mean, not only are we coming up on the mid-season break when I stumble on this audiobook, but we are ONLY NOW BEING INTRODUCED to the Governor. And this audiobook - which was first published last year - just happens to tell the story of how the Governor became the Governor. I mean, could The Walking Dead God have timed this any better for me? No. The answer to that is no.

Rise of the Governor, written by Robert Kirkman (creator of The Walking Dead comics) and Jay Bonansinga, is the first in a series of three books that expand heavily on the Governor's story line. Had I listened to this last season, when it first released, without prior knowledge of Philip Blake and his daughter Penny, the novel may have had a much lesser impact on me. Don't forget, I only know The Walking Dead through the eyes of the TV series. I come into all of this without any prior knowledge or biases. With the introduction of the Governor this season, I happily devoured the audiobook, seeking any and all information the writers were willing to give me on the history behind this incredibly secretive, twisted individual. And Fred Berman works wonderfully as the narrator, his voice perfectly sets the pace and tone of the The Walking Dead universe.

In this book, we learn very little about the zombie outbreak - a theme we're used to, whether we like it or not - and begin following Philip and Penny, his brother Brian, and two of their closest friends as they run from their hometown towards the hope of a refugee center in Atlanta. The group travels from place to place, scavenging what they can, fighting off hordes of zombies, and do their best to try and keep their wits about them. Though told in omniscient "third person" narrative, the book spends quite a bit of time focusing on Brian, Philip's older brother -  a skinny, nervous man who plays babysitter to little Penny throughout most of the story - and, of course, on Philip, our Alpha Male.

Everything Philip does is driven by his desire to protect his daughter and you get the sense that he is barely straddling the right side of sanity as the decisions he makes for the group push them further apart and deeper into danger. When they finally make it into Atlanta, and discover there is no rescue, no refugee center, no escape from the streets that are teeming with the dead, they meet up with another small group of survivors. Penny and our guys settle in nicely and things start looking up.. until Philip falls in love with one of the women and takes things way too far. In an instant, Philip single-handedly ruins what was, up to that point, the best thing the group had going for them, and as they're sent on their way with no supplies and no weapons, we begin to discover the monster within him that has been tensing itself just beneath his skin.

As the group makes their way out of Atlanta and seeks out new shelter, Brian and Nick (the one remaining friend), worry over Philip's mental state. Their increasing concern only agitates Philip more, and it all comes to head when their newest "home" is raided by a bunch of druggie survivors who want what they've got. It is here that we uncover how little Penny turned, and it is here that we watch, helpless, as Philip descends completely and uncontrollably into madness.

The story wraps itself up in the town of Woodbury, an off-the-beaten-path town that our dazed and damaged group manage to stumble into. A settlement of disconnected survivors that appears to be run by no one, Woodbury offers our men a place to call their own, and is the scene of the story's greatest twist.

Though you can certainly see it coming, Rise of the Governor will deliver fans of the show - those who have not read the comics - a sucker-punch shot straight to the solar plexus. It will immediately change the way you view the show. And although I've been told this book follows the story line of the Governor as written in the comics, I have a hunch that the TV show is splitting off from the comics and giving our Philip a life he never lived...

When I finished the audio, I read through a few of the reviews that were posted to Goodreads. Do I agree with the masses about the fact that the authors dwell a little too much on what everyone, zombies included, is wearing? Perhaps. Is the writing sometimes as clumsy and awkward as the shuffling, re-animated, rotting corpses? It very well may be. (Is it as bad as that analogy I just tried to pull off? erm....) Am I ashamed to admit that I thoroughly enjoyed the back story and insight into he-who-had-been-named "Villain of the Year" when he debuted in the comics? Absolutely not. None of that mattered to me because I wasn't expecting this to be the next Nobel Prize Winner. I was craving more of The Walking Dead and this story satisfied my hunger more than Penny's bucket of bloody hands and fingers ever could. Rise of the Governor is the ultimate guilty-pleasure read and a kick-ass companion guide to the TV show.

Even better than that, now that I've gotten a taste of the what the show is hiding, it's turned me on to the comic books. And if you think this book is a game-changer... you ain't seen nothing yet!