Benoit Lelievre Takes it to the Toilet 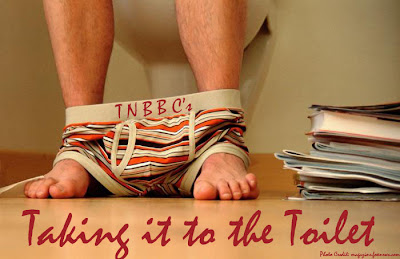 Benoit Lelievre, the man behind the Dead End Follies, wins the internet for being the first to take it to the toilet:

How I came to read The Hockey News on the john


I can’t stay on the toilet for more than five minutes. It’s not my fault, I have a good metabolism. It likes to purge. I was kicked out the bathroom once, true story. Back in the days where my girlfriend lived with her roommate, we went out one night and partied way too hard. We woke up the next day with major hangover and the bowels like the last days of . Naturally, because of my good metabolism, I went to the john’s first.

Big mistake.
About three minutes in recreating the Vesuvius’ last eruption in , roommate knocks on the door.
“Ben.”
“It’s busy.”
“Ben, it’s an emergency, I need the bathroom.”
“Can you-“
“Now.”
I swept the crime scene, flushed, got out and braced for impact. Roommate ran into the bathroom and started retching her life way. For the following fifteen minutes, all I could hear was: “You’re a fucking pig, Ben. BLEEAAARGH. I fucking hate you, motherfucker,. BEEEEEURGH. There’s still poop smear at the bottom. AAAARGHEEEU.” Did I mention I forgot to turn on the fan? You know, hangover and all.

That said, I can’t read a novel on the crapper. Not even short stories. I tried, believe me I tried. I even tried to read Proust’s Swan’s Way there. Didn’t work. But by the time I was done doing the deed, I had a page and a half to three pages done. I don’t know about you, but I’m the kind of guy who always finishes his chapters. So reading stories or novels was asking for an anal fissure or some other bathroom calamity.
So I do my magazine reading on the throne. Being a healthy and normal Canadian male, I subscribed to The Hockey News for this very purpose. Not the most uplifting stuff, I admit, but when my bathroom smells like the seventh circle of hell, I prefer thinking about the Habs’ top six conundrum and how they can possibly get rid of Scott Gomez, rather than try to grasp the beauty of Haruki Murakami’s prose. I reserve this privilege to my couch or for backyard reading.
Of course, there’s not only hockey magazines on the toilet’s lid. All the gossip magazines from the house mysteriously find their way to the bathroom too. So whenever I’m done with the NHL problems and waiting for my next issue, that’s what I’m reading. I am up-to-speed in regards of Jennifer Anniston’s marriage obsession, Lindsay Lohan, Rihanna and Britney Spears’ self-destructive ways and Kim Kardashian’s post-Kris Humphries dating activities (she’s dating Kanye West, by the way. A no-brainer, I know. No idea why she didn’t think about this BEFORE having this ridiculous fake wedding).
I auditioned other magazines for the bathroom part. Harper’s is too heavy. The ’s articles are too long. GQ has way too much publicity for a male interest’s magazine. Men are rational creatures who think about efficiency first. It’s all about the content you can take as you’re…you know…letting the bad stuff out.

Short, to the point reporting about something real like sports, that gets the job done.