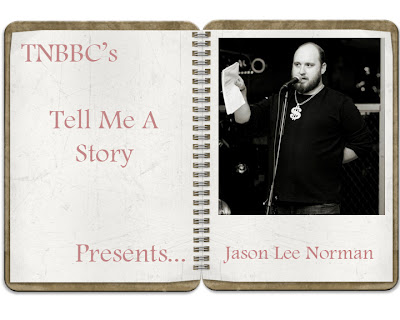 
This month's original short story comes from Jason Lee Norman. Jason is a writer with a beard . He learned how to write properly and eat biscuits and drink tea in Manchester, England. His first collection of short fiction entitled 'Americas' has a story for every country in the Americas. It is available now. He lives, writes, and eats in Edmonton, Alberta, Canada.

My father always used to say to me, "Son" (he called me son) "Son. Falling in love is easy. Getting into the Guinness Book of World Records is hard". So you can imagine my hesitance to tell him that I had fallen in love with a girl who was in the Guinness Book of World Records. Her name was Elaine and she had nearly seven thousand piercings- over two hundred of which were just in her face. When people saw us together they'd usually comment on how kind and sweet I was to see past the superficialities of her facial and body art and look into the heart and soul of the woman she was. In all honesty I was mainly attracted to her because of the piercings. It felt like I was dating someone from another universe. A place and time where man (or woman) and machine had become one colossal and beautiful being. I loved looking at Elaine. I love being with her.

Traveling through airports was an obvious rush. The airport security personnel would get this exasperated look on their faces as they passed those little wand thingies up and down over Elaine’s mostly metallic body. Around the house we would cuddle up during thunderstorms and her whole body would vibrate and hum with the electricity that surrounded us. Things eventually ended between Elaine and me, not because I couldn't get past the piercings but because she ultimately couldn't get past my lack of them. When she touched my face there was no electricity during a thunderstorm and when she ran her fingers across the skin on my arms or legs or back she felt only that- just skin. Something soft, something warm, something that would eventually die. She was beyond those things. All she really cared about was slowly turning herself into a robot or "mecha-human" before everyone's eyes and, eventually, living forever.

And then there was Beth. Sweet Beth. In some ways Beth was the complete opposite of Elaine in that not a hint of metal touched her body. Not a stud, bullring or spike had pierced her gentle skin. Her skin was amazing. Smooth- almost slippery like a buttery popsicle.

Did I mention that Beth was in the Guinness Book of Records too? She holds the record for the largest single connected tattoo. Just one tattoo that starts from her right toe and travels all the way to the top of her head, back down to her left toe and then the balls of her feet and the same thing on her backside. One single tattoo that took four artists, working consecutively, over hundreds of hours to complete. Beth had herself put into a chemically induced coma for these sessions and stayed unconscious for one month and one day. While she recovered the nurses dressed her arms and legs and torso in linen and lathered her in petroleum jelly. At night she slept in a shallow tank of avocado oil.

When I first met Beth it took me three hours just to look over her tattoo (and these were just the parts that were showing). She didn't talk during that time. She didn't need to. In the windy passages on her arms and legs I saw our future together and I knew that I would be a short one but a happy one.

Beth didn't mind that I didn't have a single tattoo but she did find it extremely irritating that I did not hold one single world record and she made it her mission to put my name in that book.

I wore a thirty-seven and a half pound beard of bees for that girl. A beard of bees isn't so much a beard as it is a beard, sweater and vest. They just need to be touching your body for it to count as a 'beard'. The beekeeper said to me “don't worry. It will only hurt when they sting you.” When they sting me?

The beard of bees record depends on the weight of the beard and also the time that you wore it for. Time of year is also a factor. Nobody had ever tried in the winter months so I thought I had a fighting chance. I wondered if the bees knew that they would die if they stung me. If they knew that I was doing that stunt for love would they feel better in being a part of it? As they stung me I hoped very much that they would lift me up and carry me away somewhere, perhaps to a big stash of honey. The beekeeper stressed that I needed to remain calm. I tried to ask him if the bees knew they were dying but he couldn't hear me. I didn't get the record and I missed the record for most bee stings received in November by two. When Beth left me I wasn't sad at all because I had seen it coming. I'd seen our future in the mural that was her body. The smell of avocado oil always reminds of me of her.

Now there is Sarah and Sarah is beautiful. We like to joke that we met in the dark but it was really just a darkened movie theatre, right before the coming attractions. I looked over to my right and there she was. I asked her for a napkin for my fingers covered in theatre popcorn even though I actually had about fifty in my coat pocket. I hate not being prepared at the movies. I asked her if she liked seeing movies in the afternoon. I asked if she thought it was weird that when the movie was over we would go outside and it would still be light out, even though it seemed like it shouldn’t be. Like how we always just assume it should be dark when the movie's over. She agreed. We agreed on everything. We agreed that even though we loved movies we still always wondered what was happening outside in the daylight. We agreed that it was the strangest if it had rained while we were inside. Walking out into the parking lot afterwards and everything would be wet and there would be little puddles everywhere. That was always the strangest. We agreed that the rain would make everything smell clean again and that if we were outside it would make us clean as well.

I like to meet Sarah downstairs when she comes home from the store. I take her bags as we get into the elevator. When we get into the apartment she usually looks tired and sinks into the couch. I tell her that I like her this way. When she’s tired she looks human, affected by the world. I like watching her put on her earrings. She tilts her head as if she's listening to a secret. By now I’ve told her about all the women in my past; Elaine and Beth and the piercings and tattoos. I've told her all about my world record attempts. I told her I'd do it all again for her. I'd wear a fifty pound beard of bees for you- I told her once. She just smiled as she put on her earrings.

I want to thank Jason for participating in TNBBC's Tell Me a Story. If you like what you've read, please support Jason by checking out his book.  Help spread the word by sharing this post through your blog, tumblr page, twitter and facebook accounts. Every link counts! And be sure to check back with us next month for the next installment....

If you are interested in submitting your short story for consideration for this series, please contact me mescorn@ptd.net.
Posted by TNBBC Super Mod at 5:00 AM