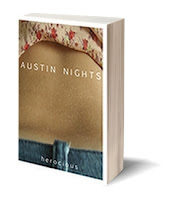 Read 5/19/11 - 5/21/11
3.5 Stars - Strongly Recommended to readers familiar with genre
Pgs:162
Austin Nights is the product of Tiny TOE Press, a DIY Publishing house run by Michael Davidson and his girlfriend. This is the first title released by the two person operation and each copy is handmade with love on their kitchen table.
The novel is a series of out-of-order journal entries that document the lives of Michael and Bridget (and their Honeyed Cat) during their relocation from Miami to Austin. Written in first person accounts, both Michael and Bridget share memories with the reader in what appears to be no particular order.
The chapters, or sections, are numbered but do not run sequentially. Initially I was going to try to read them in order, but quickly realized that I couldn't do that, since all of the chapter (or memory entries) were only one digit each, and those digits repeated endlessly throughout the novel.
It was until I neared the very end of the novel that the key to those oddly numbered chapters revealed itself, and even then, I didn't catch on right away. Ohhh, Michael.. you are a subtle little trickster!
Our narrators do a great job of creating this quiet, ever present sense of doom - for him, for her, or for both. Throughout the novel, you're anticipating something but you're not sure what exactly to anticipate. It's almost like "choose your own foreshadowing", which recurring concern will be the one to "get them"... Will the elven library leprechaun do harm to Bridget? Will Michael get stung by a bee? Will their crazy neighbor attack them? Will Michael fail to return from one of his runs?
Austin Nights is a relatively quick read. The chapters are quite short so you feel like you are making tremendous progress, which combats the frustration of the small font: More words on a page but less pages overall.
If the book had anything working against it, it would be the seemingly random story line. I found it hard to describe the book's plot, and ended up simply explaining what I had read up to that point. I am not sure that the author ever meant for the book to have a clear beginning, middle, or end - I believe the expectation was for it to appear as though it were pages ripped from a journal, shuffled through, and then stuffed back together. But the entire time I was reading it, I was wishing it was a bit more structured.
Michael Davidson did a wonderful job with the book as a physical object. To the average eye, it looks like any other paperback novel. I don't know that anyone would be able to determine that it was put together by hand in their home. It most definitely withstood the wear and tear and travel I put it through these last 3 days...Excellent job.
For more information on Michael, check out the article he wrote for us on "Being Indie". To get a better feel for the novel, check out the book trailer:
Many thanks to Michael for making a copy of this novel available for review.
Posted by TNBBC Super Mod at 7:00 AM