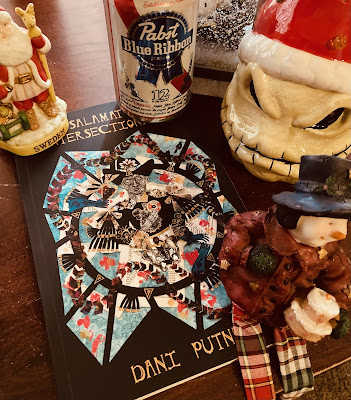 Dani Putney's debut poetry collection released this past May with Okay Donkey Press.

Go and grab yourself a copy here!

While Pabst Blue Ribbon isn’t everyone’s cup of tea, I have a deep sense of nostalgia associated with it. Some of my earliest drinking memories come from bonfires in the middle of the Nevada desert, PBR in hand, smoke in my face, all while surrounded by chatter and laughter to pierce the starless night sky. To this day, if I’m in a pinch for a good beer at a bar, I’ll order a PBR because I know I’ll like it—and it’s usually dirt cheap as well.

In the following poem from my book, imagine the speaker drinking a PBR while hanging out in the desert:

A Practical Guide to Confronting Racism

I can’t take my eyes off:

You clasp a chilled Coors Light,

The woman to your left tells a story,

maybe about her day at work,

maybe about nothing at all.

Your crush is obvious despite

the flames in my eyes,

the bonfire between us,

the smoke engulfing my brain.

what you’re hiding behind

a hazel gaze and one-step-above-

peach-fuzz on your upper lip:

from your old pickup,

howling in the passenger seat.

I stride past partygoers,

make a beeline to your

navigate to the rear tire.

"In their debut poetry collection SALAMAT SA INTERSECTIONALITY, Dani Putney kicks down your door to announce that they have arrived. With familiars of scorpions, rattlesnakes, and bees (and tattoos of Plath and Woolf on their thighs), Putney sets fire to all boundaries and borders as they navigate multiple identities in a harsh desert landscape.  As I read this collection I found myself unable to put it aside for fear that the pages were burning behind me, as I raced to the end where the speaker “sidewinds into the universe.” Putney’s language is as fearless as the subject matter: they move with craft and audacity through the intersections of tenderness and violence, violence and lust, lust and rage, rage and family, and family and love. Read this book with a fire-extinguisher in hand and a bucket of ice water at your feet." - Beth Gordon, author of Morning Walk with Dead Possum, Breakfast and Parallel Universe

Dani Putney is a queer, non-binary, mixed-race Filipinx, and neurodivergent writer originally from Sacramento, California. Their poems appear in outlets such as Empty Mirror, Ghost City Review,  Glass: A Journal of Poetry, Juke Joint Magazine, and trampset, while their personal essays can be found in journals such as Cold Mountain Review and Glassworks Magazine, among others. They received their MFA in Creative Writing from Mississippi University for Women. While not always (physically) there, they permanently reside in the middle of the Nevada desert. Salamat sa Intersectionality is their first poetry collection.