Tis the Season for River Weather 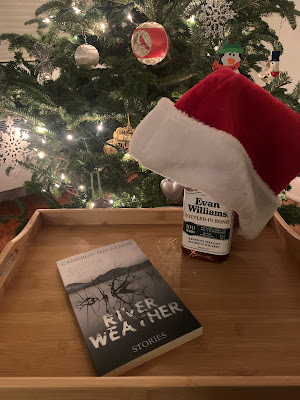 Go and grab yourself a copy here.

The book goes great with:

Evan Williams, straight, has a lot in common with River Weather. Both are spicy, perhaps a little bracing, but in the end surprisingly smooth. Both punch above their weight class. And they are both without question by the people and for the people--not a high-falutin' air to be found.

"When I was in seventh grade or thereabouts, I had a suicide scenario, the particulars of it representative of the age and time. My plan was, so I would tell friends after school by the bike path, to strap a large speaker to my chest connected to a Walkman in my pocket, and jump out of a plane. On the way down as I tore through the clouds, I'd play "Fade to Black" from Metallica's Ride the Lightning album."

What makes the collection so effective and absorbing is MacKenzie's relentless pursuit of verisimilitude in his dialogue and characters, to the degree that he’s willing to make readers uncomfortable. Written in direct, engaging prose, pared down to essences, with dialogue that rings true, these stories dig into the rich dirt of this particular time and place, examining discomfiting truths with a remarkable lack of judgement. - Booklife Review

Resonant, spare, intense, and perfectly voiced, this book won’t back down.  Cameron MacKenzie’s stories come straight at you, empowered by their perceptive humor and a steel-eyed acknowledgement of human wickedness, human hurt. No matter where you’re coming from, these tales of how men teach each other certain kinds of manhood—and what that means for all of us—will move you. River Weather sends its readers sliding down a zipline to damage, guilt, and unavoidable revelation. - Jeanne Larsen, author of What Penelope Chooses

Cameron MacKenzie's River Weather is a triumph of voice and place. Anchored in geographic and emotional circumstance, the writing shimmers with energy. The voice sits next to you, beer or coffee in hand, and tells you stories that remind you of Chekhov and Carver and Johnson but are indelibly unique, passionate and intelligent at once. This is a book you will return to time and again. -Pablo Medina, author of The Cuban Comedy

Cameron MacKenzie’s work has appeared in Salmagundi, The Michigan Quarterly Review, The Rumpus, and CutBank, among other places. His novel, The Beginning of His Excellent and Eventful Career, was called “poignant, brutal, and beautiful” by Kirkus Reviews, and “visionary” by Rain Taxi. River Weather is his first collection of short stories. He lives in Roanoke, Virginia.