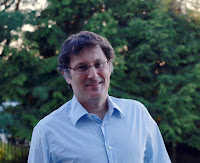 This is Robert Tomaino.
Robert is a writer, editor and consultant. He has served as a Managing Editor for the National Organization for Rare Disorders and RareShare.org, and he was an assistant editor for the textbook,  The Complete Directory for People with Rare Disorders, 1998-1999, published by Lippincott, Williams & Wilkins. When he breaks away from deciphering medical jargon, Robert writes fiction, from the fantastical to the urbane. He lives in Connecticut and is a member of the Fairfield Scribes. 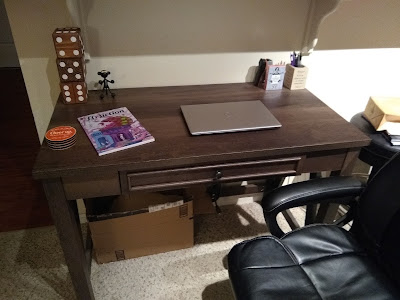 I have a simple desk set aside for writing and only my creative writing projects. I handle no other tasks at that desk. I have a small table set aside for regular work where I do medical writing, rare disease patient advocacy consulting, and mundane responsibilities like paying the bills, checking emails, balancing the budget, and marketing work. Oh, and write guest posts for blogs!

Finding a way to separate my creative life from other responsibilities is important. Creating a space specific to fiction writing helps my mindset and motivation. When I sit at the desk, my brain knows it’s time to write. It doesn’t always lead to a productive writing session, but on average it’s increased my productivity and enjoyment. The setup is spartan – desk, pencil/pen holder, and my monkey ninja, which is a hidden phone stand. (The dice are new, and the coasters are from the Mark Twain library.) I recommend a comfortable chair. For me it helps to have one where I can lean back in frustration when I just can’t get the phrasing or sentences to my liking.

I write in the morning, usually shooting for 5am. Armed with a cup of coffee, and buoyed by the solitude and quiet of the early morning hours, I dive in. Sometimes the words flow and other times they simply do not, and I find myself making another cup of coffee or being sucked into the vast distraction that is the Internet. When I try and write at other times during the day, I find my mind wanders or there are too many distractions, especially in my apartment. 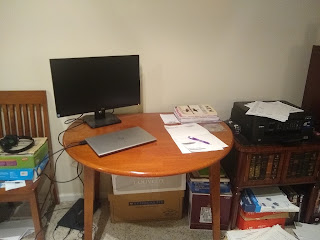 If I find the time to write during the afternoon, I usually change the location. Like many other writers, I also write in cafés. Something about the vibe of a great café, those small little communities where life hums along, helps the creative process. Less often, I’ll write at libraries. Tucked away among the hundreds of books, I find the atmosphere spurs the creative process. The variation in where and when I write breaks up the routine and invigorates my creative efforts when the flow of words slows.

I live in a small apartment. It’s neither clean nor messy, but rather a mix of organized dishevelment. The kitchen is as large as the living room. I’m of Italian descent and my grandmother taught me to cook, including her supersecret meatball recipe. Obviously, a big kitchen is a necessity for me. A room set aside for the writing craft would be nice. Life, however, is making do with what we have available to us. My new book, New Madrid, won the When Words Count Retreat’s Pitch Week last year. It’ll be released on October 5, 2021 by Woodhall Press. The contest forced me to sit at the desk and put in the work to finish the novel. It didn’t matter at that point whether there was another room or not. The time of day didn’t matter either. The work had to get done.

I also carry a notebook and will write entire scenes in a park or at a diner during breakfast. A bonus to this style is I can edit the scene as I type it into my laptop. Where, when, and how a person chooses to write are all up to the writer – there isn’t a one size fits all solution. For myself, and suspect a lot of people, multiple methods can prove to be the best way. 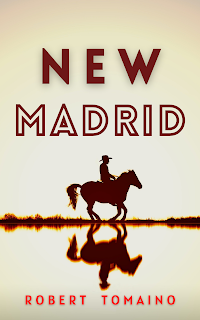 Imagine a world in which the Salem witch trials never ended…It's the early 1800s and Jack Ellard is a reluctant lawman of the growing river town of New Madrid, Missouri. Expelled from the army for his role in a brutal Native American massacre, Jack has carved out a solitary life as sheriff and rebuffed several offers to become marshal. Despite his desire to avoid controversy and conflict, trouble follows him out west. When a young girl named Abigail Duncan goes missing, everything changes. Jack is forced to delve into the town's secrets and confront his feelings for the girl's mother, Sarah. But when a firebrand preacher named Elijah Prescott, and a city-raised Native American named Chata, arrive and offer to help find the young girl, Jack is unsure of their motives. Neither is who they claim to be. Even Sarah seems to be hiding things from him, and Jack begins to fear the preacher's criticism of her bold and uncompromising demeanor.