Steph Post's Would You Rather

Bored with the same old fashioned author interviews you see all around the blogosphere? Well, TNBBC's got a fun, literary spin on the ole Would You Rather game. Get to know the authors we love to read in ways no other interviewer has. I've asked them to pick sides against the same 20 odd bookish scenarios.


Steph Post's
Would You Rather 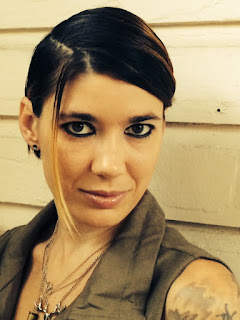 Would you rather start every sentence in your book with ‘And’ or end every sentence with ‘but’?
‘And.’ I love starting sentences with this word anyway! It adds a cadence that really clicks with my brain for some reason. And (notice, I just used it there) I tend to hold to the school of thinking that everything said after the word ‘but’ is bullshit.

Would you rather write in an isolated cabin that was infested with spiders or in a noisy coffee shop with bad musak?
These are pretty much two of the worst places I could possibly imagine to be, let alone write in. If forced to choose, I suppose I’d have to go with the coffee shop. I do like coffee, at least.

Would you rather write the best book of your career and never publish it or publish a bunch of books that leave you feeling unsatisfied?
Both of these seem like pretty depressing options, but, in the end, it’s always about the writing. I’d much rather write something that truly satisfied me and told the story I wanted or needed to tell, even if I knew it would never be published. I don’t think I could live with myself if I knowingly published work that I would find unsatisfying. I’m my own worst critic, but I’m also my own best reader.

Would you rather have everything you think automatically appear on your Twitter feed or have a voice in your head narrate your every move?
A voice narrating everything in my head. Hell, I feel like I do this half the time already when I’m alone.

Would you rather your books be bound and covered with human skin or made out of tissue paper?
I think a book made of tissue paper would be rather pretty, actually. And the human skin thing freaked me out just thinking about it.

I’ve had no one show up to a reading (or almost no one, that is) and it’s not so bad. I think that to pull off reading in front of packed room while naked, you would have to be very serious. And I’m never very serious at my own readings, so it would just be an awful, awkward mess.

Would you rather your book incite the world’s largest riot or be used as tinder in everyone’s fireplace?
Incite a riot. Definitely.

Would you rather give up your computer or pens and paper?
I could not imagine not being able to write with pen or paper. I write longhand far more than I use the computer.

Actually, getting the entire text of The English Patient tattooed on my body doesn’t sound like a bad idea…

Would you rather meet your favorite author and have them turn out to be a total jerkwad or hate a book written by an author you are really close to?
I’d rather hate the book of someone I’m close to. They can always write more books. An asshole is an asshole.

Would you rather your book have an awesome title with a really ugly cover or an awesome cover with a really bad title?
This is a tough one. I’m such a visual person, so I’m tempted to go with the awesome cover. But then, the title comes from me, from the story itself and is so much more personal than the cover, which can often come from a publisher. I think an author can be forgiven for a bad cover, but not a bad title. So I’m going with awesome title-ugly cover.

Would you rather write only embarrassingly truthful essays or write nothing at all?
If I couldn’t write, I couldn’t breathe. So that’s that.

Would you rather your book become an instant best seller that burns out quickly and is forgotten forever or be met with mediocre criticism but continue to sell well after you’re gone?
I think a lot of the books we call Classics, that still sell and are still in print, were considered mediocre (or even terrible) when they first came out. Their authors never had a hint of success and died starving. And look where those books are now. I would hate to be forgotten forever.

Steph Post is the author of the novels Walk in the Fire, Lightwood and A Tree Born Crooked. She graduated from Davidson College as a recipient of the Patricia Cornwell Scholarship for creative writing and a winner of the Vereen Bell writing award for fiction. She holds a Master’s degree in Graduate Liberal Studies from the University of North Carolina Wilmington. Her short fiction and poetry have most recently appeared in in Haunted Waters: From the Depths, Foliate Oak, Kentucky Review, Vending Machine Press, Nonbinary Review and the anthology Stephen King’s Contemporary Classics. She is a regular contributor to LitReactor and has published numerous book reviews and author interviews. She has been nominated for a Pushcart Prize, a Rhysling Award and was a semi-finalist for The Big Moose Prize. She lives in St. Petersburg, Florida.