Today's ink story comes from Kevin Michaels, as part of his Still Black Remains blog tour, which you can follow here. 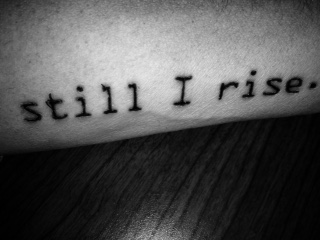 I have always loved tattoos, although I didn’t get my first until I was well into my thirties.  The desire to get one had been there for years but there was always a reason to put it off.  My first was a combination of Chinese characters representing strength and warrior spirit. I wanted something that would be a constant reminder of my willingness to fight for what I believed, express my own inner strength, and live without fear, although my friends joked that it looked like the symbols for a dinner entrée at the local take-out place. In those early internet days when Google was in its infancy, I had to rely on the word of my tattoo artist – a big guy named Fat Tony, who grabbed the seventy-five dollars out of my hand and told me not to worry about it. Thankfully, Fat Tony didn’t lie to me.

I’ve acquired more ink since then.  My favorites are the ones my wife and I decided to get last year.  They are a series of interconnected letters on each of our wrists that spell out LOVE when we hold hands (which happens quite often).

But the most meaningful tattoo is the one with three simple words on the inside of my forearm: STILL I RISE.

Still I Rise is a powerful, empowering poem by Maya Angelou about the struggle to overcome prejudice and injustice. For years it has been considered an expression of hope for those who are oppressed – Nelson Mandela used it in his inauguration speech in 1994 and a few years ago Serena Williams used it as part of an inspiring speech at the Sports Illustrated Sportsperson of the Year ceremony.  The message is that no matter what the circumstances, there must always be hope.

That message has always been important to me – through some brutally tough times it has served as a daily reminder to never give up hope. The tattoo symbolizes my own story of overcoming the odds in life and as a writer.  It’s about perseverance. Strength – resolve – and determination.  I know that even when I get knocked down, I have to get back up. Like a boxer who gets to his feet, beats the count, and keeps punching until the end.  I know that nothing will keep me down.

I don’t need Fat Tony to tell me that.

“Still Black Remains” is an original work of fiction.  It tells the story of Twist, one of the leaders of an inner city gang named the Skulls, and the architect of his gang’s decision to kidnap a mafia soldier in a last-ditch attempt to end a violent turf war.  The war started when the Skulls tried taking a bigger piece of the drug business in their Newark, New Jersey neighborhood from the organized crime family who had once been their partners.  Like most great ideas, the plan doesn’t turn out as expected. Negotiations between the gangs deteriorate, words fail, the violence escalates, and the only recourse left is the inevitable execution of the hostage.  Chosen to be the one to execute the prisoner, the story covers Twist’s ability to pull the trigger, the consequences of that action, and his internal struggle.  As the volatile situation grows more explosive by the hour, the lines between right and wrong blur; resolution comes with a price and Twist has to decide if pulling the trigger will get him what he wants, and if he can live with that cost. 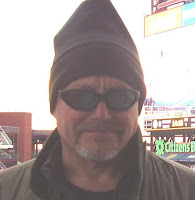 Kevin Michaels is the author of the critically acclaimed debut novel LOST EXIT, as well as two entries in the FIGHT CARD BOOKS series: HARD ROAD and CAN’T MISS CONTENDER. He also released a collection of short stories entitled NINE IN THE MORNING. His short stories and flash fiction have also appeared in a number of magazines and indie zines, and in 2011 he was nominated for two separate Pushcart Prize awards for his short stories. Other shorts have been included in the anthologies for SIX SENTENCES (volumes II and III) and ACTION: PULSE POUNDING TALES (2).

In April 2017 his latest novel STILL BLACK REMAINS will be published by Literary Wanderlust LLC.

He has also published a number non-fiction articles and stories in print publications ranging from the NYTimes.com and the Life/Style section of The Boston Globe to The Bergen News and Press Journal and raged in print at places like the triCity News, NY Daily News, and The Press.

He is the Founder and Creative Director of Story Tellers which is a community-based organization that develops and promotes literacy through writing. Story Tellers provides under-served teenagers, young adults, and women from distressed situations the opportunity to discover the strength and power of their own voices (self-empowerment through self-expression).

Originally from New Jersey, he carries the attitude, edginess, and love of all things Bruce Springsteen common in his home state, although he left the Garden State to live and work in the foothills of the Appalachians (Georgia) with his wife, Helen and an assortment of children and pets.