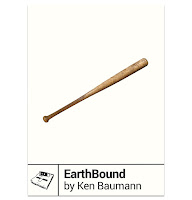 
EarthBound provides readers with a summary of the game, explains some of the background of its initial failure to reach an audience, and becomes mostly about Ken Baumann’s experiences playing EarthBound... and a whole lot of his personal life.

EarthBound is a game about a young boy’s quest in the suburbs to gather allies, grow his powers, and defeat a big bad evil guy. This title has remained popular for two decades having taken the building blocks of the RPG and produced something quirky, funny, and tons of fun to play. This is a game that I never got to play when I was a kid, but I have had many friends speak of it with reverence, and I have watched a full playthrough on YouTube. It wasn’t enough; I had to read this book.

Unfortunately, I didn’t learn as much as I had hoped about how the game was made, how people felt about it, long hidden secrets, or why it has such a legacy. Baumann guides the reader through a light summary of the game from the moment Ness, the protagonist, is talked into checking out a fallen meteor by a fellow kid from the neighbourhood and has psychic powers awakened within him. As he follows Ness on his quest, Baumann discusses some of the things that added to and possibly subtracted from the success of the game in America. Baumann describes poorly thought out print ads, such as one proclaiming “This game stinks” and including scratch and sniff stickers of mustard, bananas, and... vomit. The connection between the smells and the game was tenuous at best. EarthBound was not well received, but is remembered fondly by its fans and sees continued popularity as a downloadable game on modern Nintendo consoles. Overall, there wasn’t enough digging into the history of EarthBound and the summary of the plot didn't reveal what makes this game shine.

As Baumann talks through memories of playing EarthBound for the first time, he captures an experience that will be familiar to many gamers of the early 90’s: one sibling or friend playing a one-player game while the other watches. What I expected would merely be Baumann’s nostalgic fuzzies pivots to a sort of memoir of Baumann’s love of theatre, which leads to a career in film and television. I found myself somewhat confused. Despite the connections drawn between Baumann’s experience and elements of EarthBound, I almost felt that the game took a back seat to the memoir. Why should I listen to an actor write about a video game? Ken Baumann is the “series designer” of the Boss Fight Book series, 900% funded on Kickstarter by enthusiastic supporters. However, later books, like Shadow of the Colossus, are written by people who work in the video game industry and had been writing about video games for years, meaning they have more pertinent credibility.

The BFB website states that “Each of our books takes a critical, historical, and personal look at a single game.” Ultimately, the initial Boss Fight Books offering might have been better titled Ken Baumann Plays EarthBound and Goes On to Do Other Things. The book works too hard to tell, rather than show, what makes this one game among many special to players.

Nick Page is the manager of educational technology at the Mendoza College of Business at the University of Notre Dame. His favorite video game to play and/or watch on YouTube is Minecraft.
Posted by TNBBC Super Mod at 5:00 AM