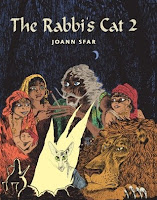 To prepare for this book review, I re-read The Rabbi’s Cat (read my review at TNBBC here). It was just as marvelous and charming as the first time I read it, if not more so. The cat’s facial expressions are funny and thoughtful while he discusses religion with his master and other Jews in Algiers in the 1930s. Random “cat moments” pop up, too, like catching prey and knocking things off desks.

It was good that I re-read the first graphic novel, because The Rabbi’s Cat 2 picks up with the same characters. Some are highly memorable, like the Mistress, her husband, and the Rabbi, but others I’d forgotten, like the Rabbi’s Arab cousin, who plays a much bigger role in this story. In The Rabbi’s Cat 2, the Mistress’s husband sends for a box of sacred Jewish texts from Russia, but when he opens it, there is a Russian man inside. The novel takes us across Africa with an odd group—“There’s two overgrown kids, a couple of lovebirds, a cat and a donkey. It’s Noah’s Ark”—attempting to get the Russian man to his final destination.

Sfar’s graphic novels are rooted in the oral tradition. The cat tells what’s happening in the present, though there are two strange passages when the cat is either unconscious or not present, but the story goes on... This may be a mishap in point of view, but it’s not terribly distracting. The cat also tells stories of stories, such as how the infamous Malka of the Lions dies. That story really got to me; I actually teared up, but there was much laughter, too. I scared my husband with my sudden whimpers and guffawing in public.

One of my favorite parts about The Rabbi’s Cat was when the cat ate an annoying parrot and gained the ability to speak. He sure had a lot to say, none of it nice. He then loses his ability when he speaks God’s name. In The Rabbi’s Cat 2, the cat still cannot speak to humans (animals always understand each other), but that doesn’t mean we can’t see what he thinks—and his thoughts are hilarious. This cat is thinking what you’re thinking and dare not say. He would be a pain on social media. 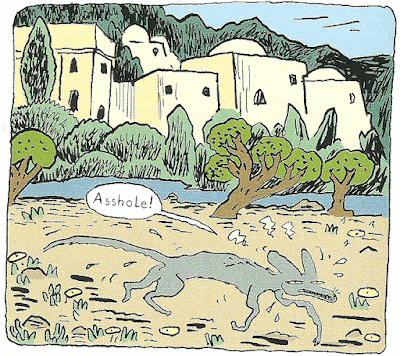 For some unexplainable reason, the cat and the Russian man found in the box can speak to each other. Everyone else hears incessant meowing, but the Russian, an artist, understands. While the choice isn’t explained, the book has a magic to it that allows you to quickly forget to ask “Why?” and enjoy the story. Perhaps those who cannot communicate with the masses can speak to each other. 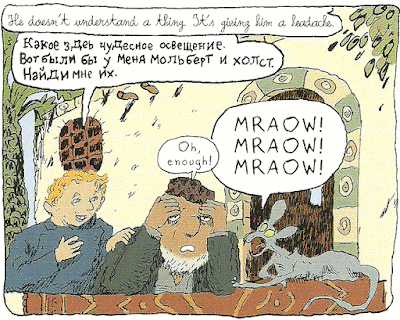 A Russian artist appearing in Northern Africa is strange, but his life story gives readers information about contemporary 1930s world politics. The Russian artist explains (no one but the reader can understand him) that in Russia, people never knew if soldiers would kill them each day, so when Stalin arrived, they thought he was “the Messiah.” The Russian was put in charge of an art school and taught people of all ages. The people drew things that they saw in the villages, like animals and the Hebrew alphabet, but the Party didn’t want all the art around and thus burned it. The Russian was given notice to never paint again, had his school taken away from him, and was forbidden from reading in Hebrew. The Party wanted to burn the Jewish books from the village, but since they could be sold for good money, the Russians put them in a box to ship. It was one of these boxes that the Russian artist jumped in to get out of the country. This story takes place over three pages of the whole graphic novel, so it’s not a long, overbearing political “rant.” It’s long enough to remind readers of the plight of the Jews, even on different continents. All of the characters face humiliation at different points for their choice of faith, and it’s getting worse in Algiers when French churches and priests pit Arabs and Jews against each other in the Rabbi’s hometown.

The Rabbi’s Cat 2 manages to be a journey to find a spiritual and physical home, but it’s more humorous than agenda-driven. The character’s levels of faith vary, so conversations about interpretations of religious text are interesting rather than preachy (people are arguing with abstract ideas, so it’s quite creative and can be silly, which the cat loves to point out). To solve one religious conundrum, a blind rabbi goes to write on a (supposedly) dead man’s forehead, but accidentally sticks the quill up his nose, waking the man who then punches the rabbi.

The majority of the journey across Africa is rather hilarious, too. I especially love a scene in which the party crosses a river. The group is riding in a vehicle, but the donkey is walking. The donkey sees the river and says to the cat, “I’m not going. I’m sure there are creatures in the water.” The cat replies, “Oh, stop it.” But then: 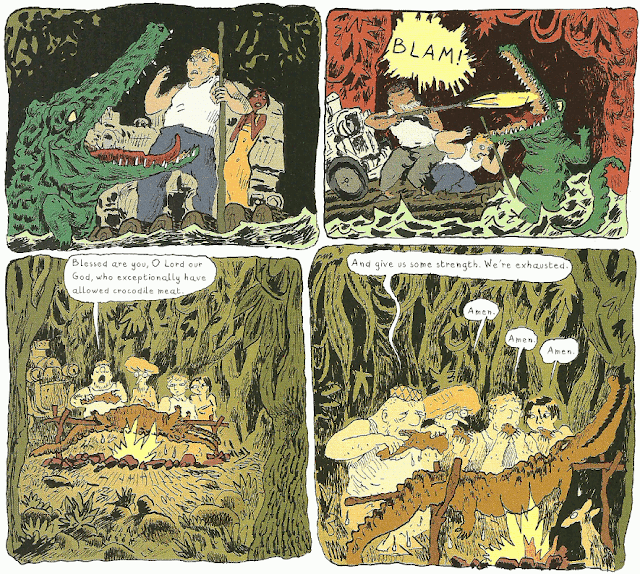 It’s not just what’s written, but Sfar’s drawing style. In some panels, his images are realistic yet human; you can see the scribbles of his ink pen under the color to create shading. In other places, it looks like Sfar was drawing while driving down a bumpy dirt road. The waviness of what “should” be straight lines gives the images a charming yet quick look that suggest what’s happening. It’s not confusing, it’s stylistic. It is especially effective when the cat is depicted, and is unmistakably Sfar. I’m smitten with Joann Sfar and his cat (yes, the cat is real) and will continue to read this series if he keeps making it. As I revisited pages to scan images for this review, I was amused all over again and very happy that I own my copies of the books.