This is Matthew Kressel. Matthew is a multiple Nebula Award finalist and World Fantasy Award finalist. His first novel, King of Shards, is just out from Arche Press, which NPR Books called, "Majestic, resonant, reality-twisting madness." His story "The Meeker and the All-Seeing Eye" was nominated earlier this year for a Nebula Award. His fiction has appeared in such markets as Clarkesworld, Lightspeed, Nightmare, io9.com, Beneath Ceaseless Skies, Interzone, Apex Magazine, and the anthologies After, Naked City, The People of the Book and many other markets. He was the former editor and publisher of the acclaimed 'zine Sybil's Garage and he published the World Fantasy Award-winning Paper Cities. Alongside veteran editor Ellen Datlow, he co-hosts the Fantastic Fiction at KGB reading series in Manhattan. He has been a member of the Altered Fluid writers group for more than a decade, is an amateur student of the Yiddish language, and is preternaturally obsessed with the film Blade Runner. Find him on Twitter as @mattkressel and his website at matthewkressel.net.

As most writers know, finding the perfect place to write is almost as challenging as writing itself. Of course, some will say that there is no perfect place to write. That you must write everywhere and anywhere you can. Perhaps that’s true. But for anyone who has ever tried to write in a crowded coffee shop, with babies screaming, people on cell phones, and the guy in the table beside you who keeps sniffling and smells like he put on too much cologne this morning — well, I’d say that some spots are better than others.

I used to write in my living room / office nook, which for most of the day is about as dark as a cave. But since I use the same computer for my day job stuff as a web designer / programmer, I found it was best to separate the two locations. So I wrote in the kitchen, on the hard wooden chairs. That’s where I wrote most of King of Shards, my debut novel, and where I finished the final draft of "The Meeker and the All-Seeing Eye," which was nominated for a Nebula Award this year. You would think that I’d stay put, since the location appears to have worked in my favor.

But ever on the search for a better place, one day I was hit with one of those lightning bolt realizations. My bedroom is sunny almost all day. I don’t know why it had never occurred to me before. So now, this is where I do most of my writing: 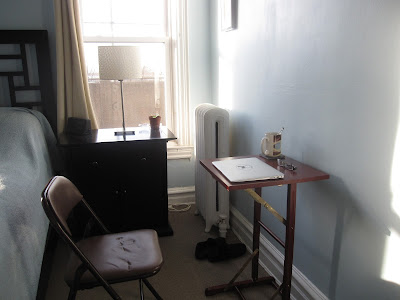 Yeah, it may not be the most ergonomic setup imaginable. But it suits me. On those cold winter days, when it was 7 degrees outside, I found myself right beside the radiator. That and with the sun, I am usually quite toasty here. I even have a small spider plant to keep me company.
My wife and I call her Cynthia.

I have a secret. This new writing location didn’t come entirely out of the blue. Though it took me several months to come up with the idea, I modeled my setup after this: 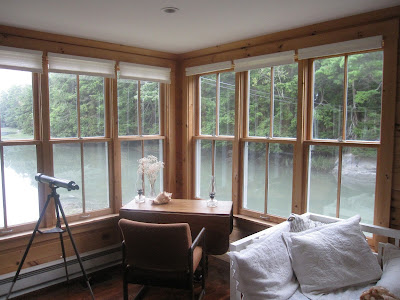 During a recent summer, my wife and I spent a week at a cottage in West Bath, Maine that overlooked a tidal estuary. Every six hours the tide went in and out, and the waters receded so much you could (if you had the right shoes) walk across to the other side. I wrote at this desk every morning, a mug of hot tea beside me, while the local wildlife chirped, twittered and cheeped from the bordering forest. If ever there were a writing desk, this was it.

And so I modeled my home desk after this perfect spot. And while the M-train subway cars rattling outside my window aren’t quite as natural as the trickling tides, I do find soothing the regular rumble of the trains. And while my current view is a cement backyard, a barb-wire fence, a bus depot, and a train yard, none of this really matters when the sun is shining and the words are flowing, because I’m deep into a story, somewhere in outer space in the far future, or at a rock concert swarming with time travelers, or walking through old factories in a New England post-industrial town, or roaming a desert planet within a shattered universe, or somewhere else.

So maybe those people who say you must be able to write anywhere are correct; once your imagination takes over, it doesn’t matter where you are. But I still believe that some spots are more conducive to creativity. And those spots don’t necessarily need to be at a cottage overlooking a tidal estuary. There might be one right beside you.