Page 69: The Poor Man's Guide to an Affordable, Painless Suicide 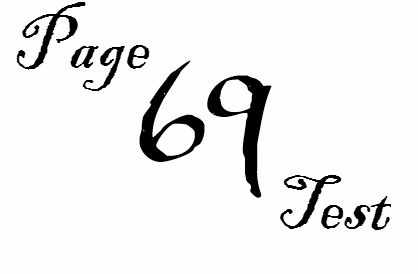 In this installment of Page 69,
we put Schuler Benson's The Poor Man's Guide to an Affordable, Painless Suicide to the test.

OK Schuler, set up what we are about to read on page 69:

Page 69 throws us into the beginning of the story, "Ace Damage," that follows ​young Nadine just at the moment that a rural, backwoods snake-slinging preacher takes Nadine's pregnant mother away to be with the women of the church on the edge of town. Claiming that Nadine's mama has The Word in her, the story's antagonist strips the woman from her own family, then comes after Nadine, who has tripped, fallen, and smashed her head against a porch step.  This pivotal moment will shape everything to come for Nadine, as we follow her into the beginning of that journey to self-discovery and destruction.

What is The Poor Man's Guide to an Affordable, Painless Suicide about?

Twelve stories, fraught with an unapologetic voice of firsthand experience, that pry the lock off of the addiction, fanaticism, violence, and fear of characters whose lives are mired in the darkness of isolation and the horror and the hilarity of the mundane. This is the Deep South: the dark territory of brine, pine, gravel, and red clay, where pavement still fears to tread.

I think some of the collection's meatier themes are here. Most of these stories deal with characters who end up having to negotiate events that are outside their understanding, outside things they've successfully dealt with. A lot of the ensuing tension comes from these characters either going to extreme or desperate lengths in order to reconcile their courses within these obstacles, be they traumatic, confusing, or just absurd. Other tension comes from some characters' complete failure to adapt. "Ace" has a little of all of the above. In this scene's case, Nadine, a child, gets wrapped up in a traumatic, confusing scenario that I think most adults wouldn't be able to cope with much better than she or her dad do. Similar situations occur in other stories, to varying degrees.

Page 69
The Poor Man's Guide to an Affordable, Painless Suicide

“Didi!” her mama called, as Nadine flew stumbling past her father and Hiram.

Hiram rose to his feet. Nadine spun around him, toward the light and the winged man it cradled, bare feet fleeing clumsy beneath her, tumbling, tumbling, spinning around, shooting forehead-first into the corner of the concrete porch step to the ringing of a harmonizing voice.

“An unlocked door is an open door.”

Two months passed like Nadine thought Old Testament time would. Two months of grade school, coming home on the bus to the graying, two-story house on Hollis Street, drawing in the new notebook her daddy got her the day after Hiram shook her mama loose from them. Two months of waiting for her daddy to come home from different welding jobs, when he’d heat up Kid Cuisines for himself and Nadine, and sit down with their Bible to pray. Every night, they’d pray on bent knees in the den for Nadine’s mama to come home. Her daddy wanted so much to have his Marlene back, to run his hand over the skin of her belly as new life grew inside her. Nadine’s daddy thought if he just said the right words the right number of times, all would be restored. Nadine didn’t know. She didn’t know if Hiram’s God’s Word and her daddy’s God’s were the same, if either one could bring her mama back. As she and her daddy sat with their bowed heads reflecting in the den window her mama still haunted, Nadine doubted either God cared.

They’d pray together ’til the sun went down, then Nadine’s daddy would sit on the couch and drink beer while he read the Bible by himself and Nadine watched TV. Some nights, she’d pester her daddy about a commercial for pet frogs. Order them over the phone, and they’d come as tadpoles in a Styrofoam cup through the mail. Put them in water, watch them grow. Her daddy wouldn’t have it. On nights when he’d fall asleep in the den, she’d watch Liquid Television. She liked grown-up stuff, too. She liked the news.

Schuler Benson’s work has been featured in Hobart, The Lit Pub, Kudzu House, and elsewhere, and is forthcoming in The Pinch. His first book, a collection of short fiction titled The Poor Man’s Guide to an Affordable, Painless Suicide, was released in 2014 by Alternating Current. He currently lives by the ocean with his fiancée and animals in South Carolina, and is a candidate in the MA Writing program at Coastal Carolina University. He tweets from @schulerbenson.
Posted by TNBBC Super Mod at 5:00 AM