Writers Recommend: Scott Abrahams and The Blue Guide to Indiana by Michael Martone

Last week we broke out our debut post for Writers Recommend, a new series where we'll be asking writers to, well, you know.. recommend things. Like the books that they've enjoyed. To you. Because who doesn't like being recommended new and interesting books, right?! Think of it as a PSA. Only it's more like a LSA -Literary Service Announcement. Your welcome. 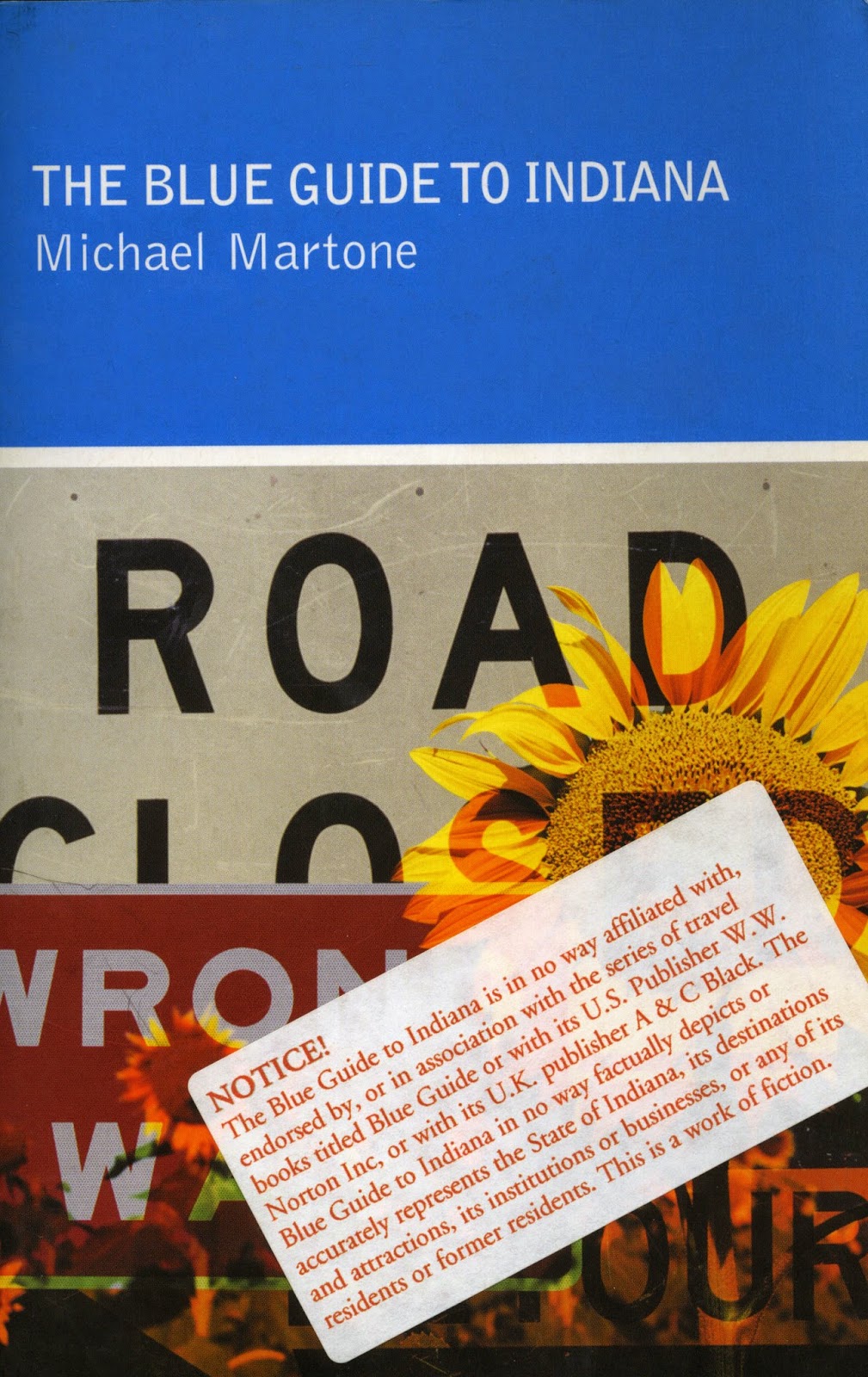 “WARNING: It seems very likely that many times of opening for museums and sites given hopefully in the text, coupled with general remarks in the Practical Information section, will be found incorrect.”

The opening disclaimer to Michael Martone’s The Blue Guide to Indiana is an understatement. And that itself is an understatement: the whole book is incorrect, from the opening letter by the Lieutenant Governor of the State of Indiana to the attraction-by-attraction overview of the forthcoming Eli Lilly Land amusement park.

The book is a masterpiece of the oh-so-plausible untrue. It is a complete guide to the history, culture, attractions, and architecture of an Indiana that totally could be, but totally isn’t. Knowing that the World’s First Parking Lot, a “10-foot square of hard packed dirt,” is not a tourist site in Plato does nothing to temper the irresistible urge to google it. The same goes for the Federal Surface Materials Testbed on the northbound and southbound lanes of Highway US 31 between Rochester and Peru, “established by an act of Congress as part of the Defense Highway Bill of 1955.”

Read on for helpful tips such as the advisement that, “as one might gather in the state where the automobile was invented, walking is frowned upon,” thus “shoe repair is a clandestine and shady black market enterprise.”

Did you know that in the southern counties of Indiana, where Abraham Lincoln lived as a boy, “the clocks must, by law, always read ten till ten, the moment of Lincoln’s assassination”? That’s why if you ask a resident for the time they will answer with, “The time is three hours and forty-seven minutes before ten till ten.”

The Blue Guide to Indiana is a book you’ll want for your coffee table to confuse your friends. Rumor has it that even though the front cover is stamped with a notice that the book “in no way factually depicts or accurately represents the State of Indiana, its destinations and attractions, its institutions or businesses, or any of its residents or former residents” and is a work of fiction, bookstores still mistakenly file it in the travel section.

Martone beautifully stays within the boundaries of subtle satire, such that you constantly catch yourself starting to believe the book. It doesn’t help that when you search for the architect Michael Graves, who is credited with designing every single building and landmark mentioned, there really does exist a person by that name, and he really is an architect, and wouldn’t you know it, he was born in the State of Indiana.

For me, that uncomfortably enjoyable constant confusion over where the mostly made up becomes the absolutely absurd is what makes the book a must-read example of what I’ve seen referred to as “fraudulent artifacts,” or pieces purporting to be a particular form of writing, such as fake interviews or emails or tables of contents (or travel guides), that turn out to be something else entirely.

The writing itself is as enjoyable as the content. It is clean and quirky, an authoritative voice that speaks as if unaware of the outrageousness of what it is saying. The First and Second Daylight Savings Wars of 1948 and 1955 are described as nonchalantly as the State Hair Dump, a highlight on the tour of Scenic Waste Disposal and Storage Sites.

For the foodies out there, Martone includes a selection of recipes from Cooking Plain by Helen Walker Linsenmeyer. I googled her, and guess what? She’s on Goodreads, and she really wrote a book by that name. But surely it doesn’t contain the recipe for snow ice cream cited in The Blue Guide, does it? The one that calls for 1 heaping china bowl of freshly fallen snow, maple syrup or warmed honey, and some more snow? I don’t know! And that’s what makes The Blue Guide to Indiana so delicious. Treat yourself and go pick up a copy at your local bookstore. It’s probably in the travel section.

Scott Abrahams is an analyst by day
and novelist by slow day.
He is the author of Turtle and Dam,
a novel about contemporary China."
Posted by TNBBC Super Mod at 5:00 AM