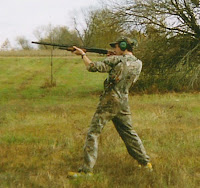 This is Sean Lovelace.

Sean lives in Indiana, where he eats nachos and plays disc golf and teaches creative writing at Ball State University. He recently dropped Fog Gorgeous Stag (Publishing Genius Press) and a flash fiction collection with other authors, They Could No Longer Contain Themselves (Rose Metal Press), on the world.

He writes for HTML Giant. He blogs at seanlovelace.com. He likes to run, far.

I don’t eat any meat that I didn’t personally scout, stalk, kill, butcher, and cook. So? Well, this means I spend a lot of times in trees, with a bow and a book and an iPhone (oh, and with doe urine and flashlight and grunt tube and skinning knife and snort wheeze and…oh, never mind. This isn’t a hunting blog. Or is it?) Sometimes deer meander along, but not often. That’s hunting. Mostly you wait in the cold, maybe twenty or thirty feet up in the air, silently. A few branches stir, a cumulus billows by, but, for a long while, nothing much happens. So I read books. And I write.

Reading and writing from high in a tree has many advantages. First, it’s pretty difficult to disrupt my writing time. I’m not going to suddenly go make a pot of coffee or get a beer from the refrigerator. I’m not going to jump online to see what new tragedy/celebrity is on CNN or to peruse helicopter crash videos on YouTube (oddly mesmerizing) or surf eBay for nacho bowls (I prefer wide, green ceramic bowls for nachos) or, you know, other internet things (OK, porn). I’m not answering any phone calls (I sometimes do reply to texts, since this activity is mostly silent). I’m not watching any TV. I’m not going to discuss with my wife the awful sound the car is making (it’s near the left rear wheel and resembles a tumbling bison). I’m not going to go find my lost four year old (she’ll be in the dog’s cage, most likely, playing with an assortment of toy rabbits). In a word, I’m not going to be disturbed (unless a deer shows up, and as I’ve said—that’s a rarity). So I actually have time and space to write.

And what a space! See this photo? This is a hollow alongside a ridge of oak trees, a series of dense thickets, and a flowing creek. Here we have what deer admire: food, water, thick cover. And what I admire: nature. The rich smell of soil and leaves. The creek gurgling by in a lovely fashion. The air is clean, the sun a bright coin in the sky. I feel, right. I’m a distance runner and when I’m running I think, “Humans have run for eons.” As a hunter, I think, “Humans have hunted for eons.” I feel my ancestry in my bones. But I digress. Or maybe I do not digress. Maybe feeling right clears the mind for writing? Who knows. 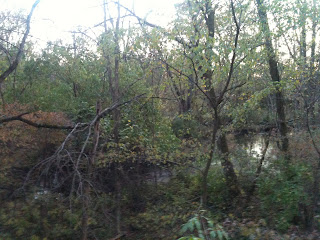 Another thing about writing in the woods is the way it affects my actual creative thinking. I’ve noticed nature appearing more often in my prose and poetry, especially the juxtaposition of nature and the modern world (anti-nature). This can be a powerful concept, I feel--as humans, we are, and are not, animals. We are in nature and simultaneously stand removed from its essence. While hunting, I will see red foxes and opossums and squirrels and crows and owls and all other types of animals. I get to observe them. I’ve listened to the trees howl and the leaves rustle (are they waving at me? Maybe.) I’ve seen a hawk snatch a squirrel. A three-legged coyote loping along. One time a raccoon climbed into my tree! I’ve seen two bucks fight. I’ve sat for hours in the brilliant whisper of a snowfall. I think there’s something in all of this that informs my art, especially juxtaposition, as I’ve noted. Some mornings I come in from the woods and walk into the kitchen and then drive into the city to teach class. I pass clanking cars and garish billboards and listen to sports radio (the most banal medium in the world—I am rather addicted to it) and later I stand with a coffee mug in front of my bright university classroom and think, “Hours ago I was deep in inky woods.” I mean it’s absurd, but amazing. If that makes any sense. 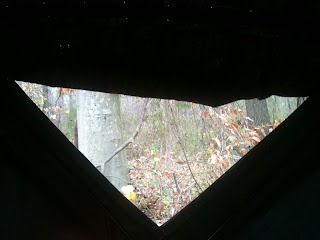 Want to see something cool? Sometimes I hunt from a ground blind. This really makes for easy reading and writing, since I can more easily move my hands. It also makes for startling images, an almost unexpected abstract art. See how strange and wonderful it can be?

Check back next week to see where Barbara Richardson writes.