This is Letitia L. Moffitt. She was born and raised in Hawaii. She received a doctoral degree in English/Creative Writing from Binghamton University, and she taught creative writing at Eastern Illinois University for six years. Her novel-in-stories, Sidewalk Dancing, has been accepted for publication by Atticus Books and will appear in print in summer 2013. Her fiction, creative nonfiction, and poetry is forthcoming and has been published in literary journals including PANK, HTMLGiant, Black Warrior Review, The Rumpus, The MacGuffin, Aux Arc Review, Dos Passos Review, and many others. 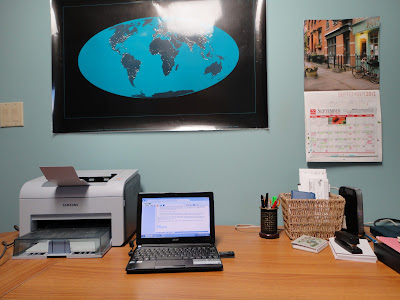 I’ve never understood the need to go far away to write. Writers’ retreats seem like literary boondoggles to me, and I can’t fathom the desire to pay a lot of money for a room in the desert, a cabin in the mountains, a cottage on the beach, for a week, a month, a year, all ostensibly to work on your novel-in-theory. I get the basic idea of these retreats, in the way they allow time and space for writers to do what is often denied us in our everyday existence.  Most writers don’t get paid to write, and most aren’t independently wealthy, so we all have other things to do that claw up the day and leave us mere shreds of time to focus on our real work.  Yet I’m suspicious of anything that pairs writing with an outlay of money.  The only thing that makes you a writer is writing; everything else is noise.

In one of my previous writing groups, there was a woman who adored the noise.  She loved talking about writing, she bought books on writing, she hosted our writing group more often than anyone else, she even convinced me to sign up for my one and only writer’s retreat.  We and the other writers would spend one week in a small town in the Languedoc region of France; we would meet in the morning in a workshop led by a well regarded if lesser known South African novelist (there are hierarchies in writers’ retreats, and we weren’t paying top dollar for this one) and then have the rest of the day free to work.

I went there fully expecting not to do any writing, and in that way at least I wasn’t disappointed.  I went because I wanted to see .  If I wanted to hang out with wannabe writers, I’d have stayed back in .  You can’t get away from them there, and apparently I wasn’t to get away from them in either.  True to the nature of retreats, this one was so isolated that it would have taken me hours on multiple busses and trains to see any of the interesting things I’d excitedly marked in my guidebooks.  What’s more, I’d have needed to leave first thing in the morning to catch the one bus out of town, and I couldn’t do that; I had to meet with a bunch of writers to talk about all the writing we weren’t doing.

The retreat town itself was a bit of a sham, too; it had been a nondescript village that only recently transformed itself into a destination for book lovers in order to rake in some tourist dollars.  The little shops along the cobblestone alleyways were calculatedly adorable, the little inn insistently quaint.  There was a very old cathedral—there’s always a very old cathedral—but its architecture wasn’t especially notable, and instead of frescos or marble statuary, the stations of the cross were depicted with cheap plastic figurines, the kind you might see on the lawn of a particularly devout suburban neighbor back in the States around Christmastime.  Moreover, the retreat took place in August.  If I learned anything from that week, it’s that I will never, ever, not for one minute even think about going to in August.  The heat was brutal.  The half-mile walk from the farmhouse where some of the writers were staying to the inn in town where the morning sessions took place would have been refreshing and pleasant in October or May but instead felt like a death march, the stream beside us transformed into the River Styx, the locals with their wary but not necessarily hostile Gallic stares morphing into demons with pitchforks.  It was too hot even for cheese, much less writing.  Why go to if you can’t enjoy the cheese?

No, I don’t go away to write, not ever.  Where I write, always, is at a desk in my home office, and I intersperse writing with doing laundry, going running, grading papers, buying groceries, cooking dinner, and obsessively checking my email for acceptances or rejections.  It’s just another part of my life, in other words, and that’s just how I want it.

Check back next week to see where Sean Lovelace gets his writing done.
Posted by TNBBC Super Mod at 5:00 AM