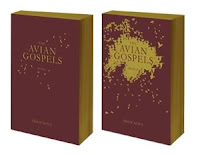 So, the lapsed Catholic in me is chuckling as I find myself, for the second time in as many months, reviewing a book that outwardly appears to be religious in nature. The first was Beatitude by Larry Closs which, as you can see from the title, would require some explanation. Rest assured, dear reader, the book had nothing to do with the eight blessings found within the bible. I promise you.

The second book, of course, would be this one. Look at these babies, wouldja?! The Avian Gospels is a full length novel marketed as a two volume set of mini bible lookalikes, complete with luscious red textured covers, gold lined pages, and red ribbon marker. The pages even have lines marked in multiple of 5's, like the actual bible marks the lines and verse for easy reference. They are really quite lovely, and may very possibly be the most perfectly packaged books I have ever read.

But enough about the book as an object. You probably just want to know what it's about, right?

Here's the quick and dirty. The Avian Gospels is a story about a nameless war ravaged city that is suddenly, unexpectedly, buried beneath a plague of birds. For no known reason, millions of them flock to the city at once, blotting out the sun and covering the ground in a blanket of feathers and beaks.

This city, which, besides being nameless, also appears to be locationless - sandwiched somewhere between Hungary and Oklahoma (now I admit to being geographically challenged, I am pretty sure that in this version of the world, Hungary and Oklahoma appear to be butted up against one another) - this city is run by a power hungry man who calls himself The Judge. His soldiers, the RedBlacks, enforce his rules with their fists and heels - motivating the city's inhabitants and maintaining the upper hand by any and all means necessary (brute force and torture being among their favorites).

There are three castes, or groups, of people co-existing within the city walls: The RedBlacks and their kin - natives of the city who rule the businesses and the streets; the Gypsies - who fled their native home of Norway during the war and who now hide from the RedBlacks underground, calling the twisted system of tunnels and trapdoors their homes; and then there are the two Swedes who can control the birds - Zvominir and his son Morgan.

Once the Judge discovers that Zvominir and Morgan can control the birds, he quickly employs them to clear the city of the flying creatures. Zvominir, desperate to give his son an easy life, sucks up to the Judge and performs daily walks through the city sending the birds away. His influence over them can only last for so long however, and within a few days the birds migrate back...

Morgan, on the other hand, uses his power to woo the crowds, creating intricate and captivating masterpieces in the sky - using every color and species of bird there is. He is not as spineless as his father though, and rather than pool their powers together, they end up turning them onto each other... Zvominir believes in continuing to work for the Judge, purging out the birds day in and day out, while Morgan - sick of the way he and the Gypsies are being treated - takes up with Jane and the two begin to devise a plan to take the city back from the RedBlacks.

All of this is told to us by a strange and elusive collective that refer to themselves simply as "we" and "us". They appear to be telling the story after the fact, disclosing events that took place in the past and - if we are to believe them - that took place before they were even alive. This collective seems to have had no first hand experience with Zvominir, Morgan, or any of the situations they have been revealing. They also appeared to be independent of sides which led me to believe, by the books end, that in their time - however far into the future that might be - there are no longer any divisive lines between the natives and the Gypsies.

I struggled immensely throughout the novel with the reliability of our narrators. I mean, how well preserved can these stories have been? How many times had they been handed down before they were shared with us? How much time had passed between the actual events and committing the events to pen and paper?

And then this got me thinking again about the whole religious angle. I mean, besides me mentioning at the start of all this the fact that the darn things looked like mini bibles, you know? Cause, well, isn't this what kind of happened with the stories of the bible? Weren't those events supposed to be a part of our past? Weren't they all witnessed by different people, who then passed their versions back and forth verbally, until finally someone, somehow, committed these versions of the events to paper later on? Just how reliable are those events... the events we are supposed to believe in so unflinchingly, the events that are preached to us when we sit in church during the Sunday masses? Events that are told to us from a collective group of people who were not there to witness them for themselves. Should I even be making this kind of connection? Was any of this Adam Novy's intent?

Could Adam, the author behind The Avian Gospels, have set up this entirely bizarre, beautiful story with the hopes that we would make this connection on our own? Did he have advanced knowledge that his publisher would market the books as mini bibles, and that his collective narrators would spawn this type of thinking in his readers? Or is this me just throwing my own fucked up, twisted, agnostic views out there to see if something sticks?

Reading through most of the reviews posted to Goodreads, it would appear that I am as I feared. I'm the only one making this sort of connection between the two. And I wouldn't be surprised to find out that I am completely, embarrassingly, and entirely off-base. I mean, check out this incredibly well thought out review by Bullet Review - the guy sees such a lack of tie-in to the Catholic religion that he even asks at the end of the dang thing why it's called a gospel! Yet he sees so much more than I did at first glance.

But that's cool with me, cause no matter what the author's intent was, no matter what I ended up taking away or completely overlooking, I thoroughly loved this book. It stirred my brain, it made me think, and it captivated me. It's a war story without being a war story. It's a survival story without being a survival story. It's what you make of it while you're reading it. One of the things I really enjoyed about it, which usually annoys me to no end, is the fact that some things were just never explained. Like, why did the birds suddenly migrate to the city? And what chain of events placed the Judge in the seat of power over the city? And just who are our narrators?

Not to mention that it's a pretty freaking amazing concept, isn't it? I mean, hello... two guys who have the power to influence birds?!!