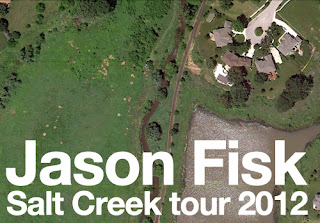 Welcome to the first stop on the Jason Fisk "Salt Creek" Blog Tour!

As an obsessive fan of independent literature, I can't help jumping at the chance to introduce readers to cool and ground-breaking new authors and publishers. So when CCLaP asked me to lend a hand in giving Jason Fisk's new story collection a little love, I couldn't say no, could I?

It's not just any old story collection, either! Salt Creek Anthology is CCLaP's first hyperfiction project - a book containing loads of micro-stories which share underlying themes and minor references that are connected through a series of hyperlinks. Think new-age "Choose Your Own Adventure" books. Each story is connected to another story within the collection by a word or phrase or idea. Clicking on the hyperlinks will immediately pop you into another story that is in some way connected to the one you just left.

However, unlike those uber-popular books of the late 80's, this hyperfiction collection - should you so choose to eschew the hyperlinks - can be read in a perfectly linear fashion. It's your choice!

I'm sure you are thinking, though, that this Salt Creek must only be available as an eBook since its uniqueness is in its hyperlinks, right? But you would be wrong! Publisher Jason Pettus has come up with an ingenious way to give you a similarly interactive reading experience in paper form. The book, in addition to being printed as EPUB and MOBI files, is also available in print and PDF versions. The print version comes in a handmade box and is actually spineless - it employs colored text to tell you what page to flip to (in place of a hyperlink) or you could simply shuffle the book's pages and read the entire thing completely at random.

So now that I've wooed you into checking out his book, I've asked Jason Fisk to woo us with what being Indie means to him:

My dream of being a writer had barely lived before it was put to death. I had always been a reader, and I suppose, if you were to probe the deep recesses of my young mind, you would have found seedlings of my longing to be a writer just waiting to take root in my soul; however, they didn’t, not then.

The first person to sort of kick my dream of writing toward the dark corner of my mind was a high school English teacher named Jack. He wasn’t my high school teacher, but a friend of the family who I worked landscaping with for a summer. When Jack asked what I wanted to do when I got older, I told him that I wanted to write. He sarcastically said, “Yeah, good luck with that,” and then rattled off some crazy speech about not being able to make a living as a writer, and he suggested I alter my aspirations.

What my 15-year-old mind heard was Jack doubting my potential. That conversation honestly made me reconsider ever wanting to write. Part of me was pissed; how dare he squash my dreams. Part of me realized that he was probably right, I wouldn’t be able to make a living writing. Why should I even bother?

I later realized that Jack was actually voicing his own frustrations with the publishing industry. I learned, later in life, that he was a poet who struggled to find a home for his nature poetry. I was happy to hear that his poetry book about gardening eventually found a home with a small local press.

Over the years, there were numerous others who had their turns at kicking my dream of writing to the back corner of my mind. Practicality slowly choked, starved, and shriveled that dream into nothing. It wasn’t until I was sitting in an elective course, The History of Poetry, that the dream was pulled from its dark corner and dusted off. A poet, Debra Bruce, taught the class. She believed that, like a mechanic learning his or her trade, one could not simply learn everything from a book, but instead had to get their hands dirty and actually feel the parts/words as they went together. She had us writing all different types of poetry. It was magnificent.

Because of that class, I fell deeply in love with writing. I became obsessed, writing poetry all the time. I immersed myself in online zines, and would follow one link to another, discovering new and wonderful places. Some of them were twisted, some were beautiful, some were subversive, all were something new, and something wonderful. I found kindred spirits that I never would have found on commercial bookshelves. I found indie literature, and eventually my writing found its way into that world too.

I could care less about the discussions surrounding indie literature’s viability, or its representation of something idealistic and pure. Being indie, to me, is something much more than that; it is something crude, something raw, and something beautiful. It is the grease on my hands after a hard day’s work. It is my outlet, and is one of the main reasons I write. 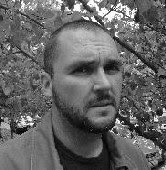 Jason Fisk is a husband of one, a teacher to many, and a father of two. He is the author of Salt Creek Anthology, a collection of micro-fiction published by Chicago Center for Literature and Photography; the fierce crackle of fragile wings, a collection of poetry published by Six Gallery Press; as well as two poetry chapbooks, The Sagging: Spirits and Skin, and Decay, both published by Propaganda Press. For more information, feel free to check out: www.JasonFisk.com.

Tomorrow, be sure to follow the tour by visiting Stop #2 here.
Posted by TNBBC Super Mod at 5:00 AM