Authorageous Event at the KGB 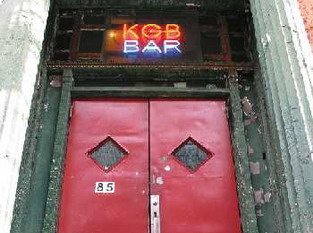 Yes, I know. The event I am writing about took place 13 days ago. I admit it, I am not the most timely when it comes to blogging about events. I'm a bad blogger but I've come to terms with it!

On October 9th, I took the day off from work to attend my new niece's baptism. It just so happened to be the same day that TNBBC fave's Greg Olear and Ben Tanzer were doing a reading at the KGB bar in NYC. I couldn't have planned that any better. And there was no way in hell I was going to miss seeing these two guys performing together.

I snagged my mother mid-afternoon, after leaving the baptism party and my boys behind, and we headed out to Port Authority (my fail safe parking spot for all of our NYC adventures). Port Authority, as you know, is nestled comfortably between 41st and 8th - walking distance from every touristy thing your mind can conjure up. Worringly for me, the KGB event was taking place on 2nd ave and East 4th st. Which meant a trip on the subway. Which meant I had to navigate the subway system on  my own for the first time ever - my mother had never been on the NYC subway trains before so she was no help! (obligatory nervous swallow)

I was terrified of getting it wrong. I've never gotten on the subway without a seasoned NYer holding my hand, and 2nd ave was going to be furthest downtown I have ever been. Wait, is 2nd ave downtown? Or is it uptown? When I'm traveling from 41st, is it considered going downtown because the numbers go down? Or is 2nd ave considered uptown because it's at the top of the number chain? See what I mean? Now, also throw in the fact that the area to which I was traveling had NAMES for streets which would mess me all up, rather than a simple number grid which anyone with a brain can follow? (I can picture Home Between the Pages and Book Sexy Review slapping their foreheads in frustration as I type this!)

I had mapquested transit directions and copied down two options, because I had no clue which underground lines I might end up near. But it didn't help to calm my nerves as my mother and I descended into the bowels of the city that night. I had called Greg Olear, god bless his author soul for humoring this chicken-shit little city traveler, and was hoping to meet him out near the bar before the reading started, so I asked which line he was taking, which was none of the lines mapquest had given me, so I quickly nixed that!

After proudly demonstrating to my mother how to use the metro card machine once underground, I opted to give the R line a shot. (Rather than the ACE, which just looked too fucking confusing.) It required no transferring at all, which made me feel slightly less nervous. And it went off without a hitch. Counting 5 subway stops, we exited the subway and made the climb up to the street, popping out at 8th and Astor. From 8th we walked down (or up?) to 4th, and made it to bar without any issue, and extremely early.

As we waited for Greg to show up, and the bar to open, I got to see my first sky-writing in process. I have no clue what was "Now Open" but it was pretty neat to see the airplane write it all out as we waited. Only in NYC, right?


And then Greg showed up and the bar lights came on.. and in we went!

KGB is really tiny and dark and intimate. The walls are a deep deep red, the room was lit by candlelight, and there were creepy ass pictures all over the walls. As we sat together and watched the room fill up, Ben Tanzer arrived and much hugging and "so good to finally meet you in person's" were had, and then the readings were underway.

I was nearly knocked out of my seat when the KGB bar event was kicked off with the hostess introducing Greg Olear's novel Fathermucker using a snippet of my review! I wish I had caught that part on film because I barely believe it myself!! But I did happen to catch Greg's reading on video, and here it is for your listening pleasure:

Since this was Greg's event, and since it revolved around Fathermucker, it was dubbed Dad’s Night Out: An Evening of Readings by Literary Fathers. The authors were all fathers, and most of the readings revolved around fatherhood or having kids...

The next two readers were Darin Strauss (More Than It Hurts You, The Real McCoy, Half a Life) and Matthew Norman (Domestic Violets). I haven't read either author yet. Darin's novel was really depressing - about a young guy who caused a car accident that killed a young girl - and Matthew's novel has been on a lot of book bloggers lips this season. He read the first chapter which is all about a middle aged man's disgust at his own penis. It was quite hilarious.


The final author was Ben Tanzer, and he read from You Can Make Him Like You, and of course I recorded that reading as well:


It was really cool to hang with both of them. The atmosphere at KGB was amazing and the authors all sounded great. I thought Greg and Ben stole the night, and the audience was totally eating them up!

To top things off, at the end of the event, I spied Diana Spechler, who had recently joined TNBBC on Goodreads for an Author/Reader Discussion of her novel Skinny. We chatted as a group for a bit, then split up - the authors heading out for drinks and me and mom heading for home.. I had work the next morning and a long ass drive ahead of me, assuming we could find our R line and get the hell out of the city first!

Of course I couldn't let the night end without photo evidence: 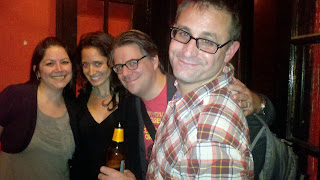 
This night goes down in author-awesome-history! God I love these guys .......