Tell Me a Story - Matt Micheli 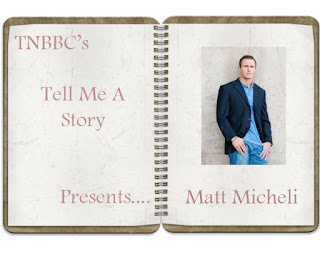 Welcome to the next installment of TNBBC's Tell Me a Story!

Tell Me a Story is a monthly series that features previously unpublished short stories from debut and Indie authors. The request is simple: Stories can be any format, any genre, and any length. And many amazing writers signed up for the challenge.

Todays story comes from the wildly unpredictable mind of Matt Micheli. Matt is the author of Memoirs of a Violent Sleeper, and coins himself as "a transgressive fiction writer out of Austin TX who deals with lead characters that don't quite fit the norm". His analytical, sometimes satirical, and often times blunt views of religion, love, loss, life and beyond are expressed through his storytelling. For him, writing is an escape from the confines of a consistent and ordinary normality. He is currently working on final edits for a new novel titled SMUT.

Her:
Is this supposed to taste good? Because it doesn’t. It tastes like shit. Am I doing this right? Maybe I’m doing something wrong. But then again, how else would you do it? How else is there? This is the only way. It’s no rocket science. Jesus. Eugh. Mother . . . fucker, this is gross. I always thought it’d taste like pennies. Or at least that’s how I remember it as a kid. Like pennies. Not like fucking . . . rotten shit. This better work. For all this? This shit better work. How am I supposed to know? Am I supposed to feel something? Is it like drugs or something? I always heard it was like drugs or something. Like Ecstacy. Well, I don’t feel it. I don’t feel anything, yet. Or does it take a while? Maybe it takes a while. Eugh. How much am I supposed to drink? Maybe I need to drink more. But, I don’t know if I can. This is awful. Absolutely awful. Maybe my senses are heightened; that’s why it tastes so bad; so . . . strong. Is that what happens? I always heard that your senses go crazy. Maybe that’s what it is. Maybe that’s why it tastes so . . . bad. Sniff. Sniff. I don’t know. I can’t really smell or . . . see anything differently. I don’t . . . think, I can hear anything differently. Maybe I need more. Maybe I haven’t had enough. Oh God, this is disgusting. Gulp. Absolutely . . . disgusting. I thought this would be easier. I didn’t realize it would be . . . like this. I mean, was it like this for you? For your first time? I don’t know how you did it. Or . . . why you did it. Eugh. I guess I’ll drink more. Cause I haven’t felt anything . . . yet. Or . . . maybe, I am feeling . . . something. Yuck. Maybe we could’ve gotten a . . . a slightly higher quality. Maybe the quality isn’t good enough. Maybe that’s why I’m having to drink more than I thought. Maybe, it’s the low-quality. How much did you have to drink . . . your first time? And was it low . . . or high quality? Or does it matter? Maybe it doesn’t matter. Eugh. This is . . . gross. But, I guess we gotta do what we gotta do. And what do we gotta do . . . after this? I mean, I have my suspicions, but . . . Is it always like this? Does it always taste like this? Like crap? Does it ever taste like pennies? That’s what I always remembered as a kid. The taste of pennies. Gulp. Eugh. It’s sticking to my throat. Smack. Smack. Is that supposed to happen? It’s like . . . coating it. Ew. It’s thick. I think its . . . thickening. Should I keep drinking? It’s starting to stink in here. I think my senses are heightening because it’s starting to stink. Alright. I think I can feel it, maybe. Or maybe not. Or maybe . . . well . . . Maybe. I mean, I feel . . . something. Eugh. It’s really starting to stink in here. Does it always stink like this? Maybe it’s always gonna stink like this. Is it? Eugh. Ok. It’s getting thicker. How much more do I need to drink?

Him:
We barged in and found her there, sitting on the floor, buck naked, covered in blood, talking to no one. There was blood everywhere. It stank to high-heaven. I threw up. Actually I think we all did from the smell but I was the first one to enter. The first one. I don’t know how long she had been in there but it must’ve been several days; the body was decomposing and looked bruised and sunken in and the odor wasn’t from, how should I put this, fresh kill. There were chunks of flesh missing from (the officer swallows and looks down) the victim’s arms and legs. The girl’s mouth was covered in blood; she had obviously been drinking and eating from the corpse. (Still looking down, he shakes his head back and forth) Sick. I’ve seen some sick shit in my day (he looks right at me nodding his head up and down) but never have I seen anything like this. Her mouth: I remember her teeth. It looked like there were pieces of flesh between them: her teeth. I have never (he shakes his head and looks off) . . . never seen anything like that. (His head still shaking) And her eyes; like a cat in a headlight. Wide open, but . . . empty; dead; (he pauses to think) like mirrors. That crime scene; that smell, it still keeps me up at night. That girl’s cat eyes and her mouth smeared in blood and her talking some uncontrollable gibberish and the smell. (He shakes his head looking off at nothing) I still see images of it every day. (He looks down again, contemplating) I still smell it. I taste it . . . like pennies.

I want to thank Matt for participating in TNBBC's Tell Me a Story. If you like what you've read, please support Matt by checking out his website and book. Help spread the word by sharing this post through your blog, tumblr page, twitter and facebook accounts. Every link counts! And be sure to check back with us next month for the next installment....
Posted by TNBBC Super Mod at 4:00 AM