Ben Spivey on "Being Indie"

On "Being Indie" is a monthly feature that will be hosted here on TNBBC. It is my hope that we will meet a wide variety of independent authors, publishers, and booksellers as they discuss what being indie means to them. 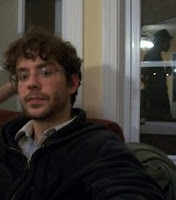 Ben Spivey is Co- Founder, Co-Editor and Publicist for Blue Square Press, which was established in 2010. He is also the author of Flowing in the Gossamer Fold, which was reviewed here back in March. And he blogs at Your Brain's Black Box.

Ben's novel was partially influenced by photographer Yelena Yemchuk and the beautifully uneasy feelings her artwork created within in.

Today, he shares with us this thoughts on the term "Indie" the personal impact of such labels.

I am not purposefully trying to be "indie." What I write—what I am doing—is what I love to do, it is what I believe to be important, and however that is classified is whatever to me.

While I do not label myself I understand the importance of such distinctions.

I've heard the kids with the shoulder bags talking on the train—people who enjoy being able to say they like writer X, "haven't you heard of X?" And when their friend says, "who?" They say, "X is an indie writer. Where have you been?"
I'd be just as happy as an Oprah book-of-the-month as long as my vision and my words and my passion was not compromised in the process.
The "indie world of books" is what excites me right now. Is it an entire world? Feels like it sometimes. It can be overwhelming, like a table full of BBQ nachos can be overwhelming.
People become board with "mainstream literature" but that doesn't mean there are not great popular fictions, just like anything there are good and bad, worthwhile and not. "Indie," can be more exciting and feel more personal, but it can be just as bad as anything else.
So what is being "indie?" If it's being independent, then I am not. If it wasn't for fellow writers, authors, designers, publishers and close friends, I'd be nothing.
A lot of the people I am involved with support each other in someway. It's a network. Maybe it should be called "being collective."
When I think "indie" in the conventional sense I think small press and all of the beautiful works that a lot of those hardworking people produce, distribute and love.
Posted by TNBBC Super Mod at 7:00 AM