It's not every day that an author offers to read my chart! So I took full advantage, and felt incredibly flattered, when the opportunity arose. Now, if you know me at all, you'll know that I'm not one to read my daily horoscope. I don't really put a lot of stock in the stars. But it sure is fun to see how things line up now and again. Plus, I have a super cool Zodiac, and Greg Olear is a super cool dude... (and before you go and question me on the relevance of posting a zodiac chart on a book blog, helloooo... it was created by a kick-ass author!) so check it out *: 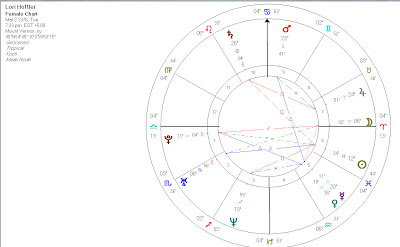 Pluto in the First House is the most important planet in your chart. The First House is your personality; how you appear to others. Pluto brings strong leadership, occasional bursts of tumult, and a tendency to change. The volatility of Pluto is mitigated by the Pisces Sun, which brings great sensitivity and, because it’s below the horizon, a propensity to brood…or, at least, to wax artistic. You are a Libra Rising, too, which also serves to harness the angry power of Pluto.

There is no earth in your chart at all, which means you’re not well grounded. You are mostly air and water…you operate at a high intellectual level, your thoughts move quickly from one idea to the next, and because you are a Libra Rising and you have both Venus and Mercury in Aquarius, the highest of air signs, you are particularly good at communicating these ideas. All of that, plus Pisces below the horizon and the placement of the Venus/Mercury conjunction in the Fifth House, indicates an artistic touch.

Saturn in the Tenth indicates a fear of public failure, or career failure…that plus Pluto’s prevalence suggests you’ll probably change careers a lot (and Uranus in the Second suggests lots of dramatic shifts in income levels) especially early on, before finding something in which you can shine. The Moon in the Seventh suggests that your partner is the most important person in your life, your filter and touchstone; that you married young; and that before that, you didn’t like to be single.

Also, you have a lot of cardinal energy, which means you’re better at starting projects than finishing them.

* A huge thanks to Greg for taking time to whip this up and doing such a great job of it! Did you know he is a semi-professional astrologer?
And now, gentle readers, I leave it up to you to decide what fits and what doesn't :)
Posted by TNBBC Super Mod at 8:56 PM