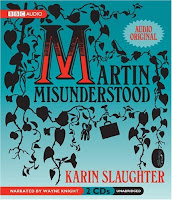 Listened 5/29/11 - 5/31/11
Unrated
Time: 2.5 hours
"Once upon a time there was a man named Martin...."
Standing in line at the Book Blogger Convention's "Build Your Own Swag Bag" stations, I was handed an audio copy of Karin Slaughter's novel Martin Misunderstood. I quickly passed on it - not particularly caring for audio books OR murder mysteries - until I heard that Wayne Knight was narrating it. You know Wayne Knight, guys... Newman... from Seinfeld?
I mean, I'm no fan of the show (yes, it's been said that only people with no sense of humor dislike Seinfeld, I'm a freak, I've come to terms with it...) but I'm thinking, How bad can it be if NEWMAN is narrating? It's gotta be kinda funny, right? It's gonna at least have my attention, right? So I went against my gut - which was saying "it doesn't matter who narrates it Lori, you don't like murder mysteries" - and threw it into my swag bag. I mean, it's not like I BOUGHT it or anything.... and it was incredibly short clocking in at 2 1/2 hours. That's not a whole lot of time to commit myself to. That's two trips back and forth to work. I can handle it. Even if it's bad. Where's the harm in taking it for a spin?
Oh boy. Ooohhhh. Boy. I can't decide if my issues with the audio book lie with the writing - which is your typical, cookie cutter who-dun-it - or with Wayne Knight's interpretation of the writing.
For starters, though he has a reasonably good natural reading voice, his character voices cracked my shit up! And not in the "oh, that Wayne Knight, what a comedian..." kind of way. More like in a "Oooh my Gawd! Is he really going to make Martin and his mother sound like that? For the entire book?..." kind of way.
I gotta give him some credit though, there were a lot of characters in this book, and he managed to create unique (if not ear-grating) voices for each one.
The most painful part of the audio book - for me, and I have to imagine, for Wayne as well - were the sex scenes. Oh.My.Fucking.God. I will never look at Wayne Knight the same ever, ever, again. The grunting and the spasms and the shooting of the loads... dear lord. They were awful. Like "worse than walking in on your parents getting it on" awful. My poor ears. My poor, poor ears. I mean, I found myself (god forgive me for saying this) wondering if that is really how Wayne Knight sounds when he is getting his freak on. I can't get those sounds out of my head.
Thankfully, those scenes did not last long, mainly due to the inexperience of our pathetic protagonist, Martin.
And since I'm mentioning Martin, I may as well give you some back story on him, yes?
Ok, so Martin is this middle aged corporate loser who still lives at home with his overbearing and annoying mother. He currently works with all the cool kids who endlessly picked on him in school, and things are no different now that they are adults. Teased day in and day out, friendless and lonely, Martin loses himself inside hundreds of murder mystery and thriller novels. Until the day he finds himself the prime suspect of one when a co-worker turns up dead.
Not the best story in the world, and most definitely an embarrassing and awkward narration. But I really have nothing to judge it by. I don't normally read murder mysteries and I have never listened to an audio book in it's entirety before - so I can't be sure if it's ME or the BOOK.
Have any of you listened to it? Have you read other Karin Slaughter novels? Is this typical of it's genre? Is the narration typical of audio books?
Though I am extremely skeptical, I won an audio copy of Among the Mad at the Picador Blogger Cocktail, and though it is a heck of a lot longer (a total of 8 hours, I believe), I think I am going to give it a shot. Just so I have something to judge Martin Misunderstood against. Just to give audio books another fighting chance.
Though I doubt I will ever be able to shake the "uuhhh... uhhhh... uuuuaaaahhh's" from my brain for as long as I live. *shivers*
Posted by TNBBC Super Mod at 8:00 AM