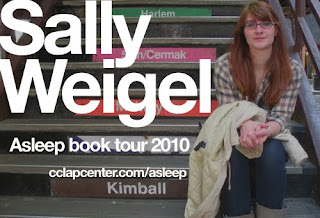 Good morning everyone! Welcome to Sally Weigel's Asleep Book Tour 2010! We are stop number 2 on a two week long blog tour where Sally will be promoting her new eBook "Too Young Too Fall Asleep", which was published by CCLaP. CCLaP's website has a list of all the blogs on the tour so you can follow her as she blog hops.

When I was asked to be a part of Sally's tour, I was absolutely thrilled. I had recently downloaded and reviewed her eBook. It's quite impressive knowing that she wrote it when she was still in high school.

Sally was kind enough to answer a few questions regarding her eBook, the writing process, and shared some personal stuff as well. Enjoy!

When did you first start writing?

SW: I started writing in middle school and never really stopped. Although, now that I think about it, I can trace back the hobby to second grade. I remember writing stories and sending them to my Grandpa. My Grandpa was managing editor of The Indianapolis Star, and published two novels after retired. He would type up my stories and bind them in a folder, as I paraded around telling everyone I wanted to be a writer when I grew up. This dream was quickly changed when I decided I wanted to be an Olympic gymnast in third grade.

What is the first book you remember reading?

SW: The first novel I really remember resonating with me was “The Mixed Up Files Mrs. Basil E. Frankweiler”. I was an avid reader as a child and always had my head in a book, mostly chapter books about gymnastics or preteen novels but I reread “The Mixed Up Files of Mrs. Basil E. Frankweiler” countless times. I went to the Met in New York City for the first time this winter and still, all I could think of was the main character of that book having a sleepover in the museum with her younger brother.

SW: I am the youngest of four in my family so growing up, I looked up to my older brothers and sister. Especially my oldest brother. He was a big hippie and always king to me so I copied everything he did. He gave me John Lennon and Joni Mitchell CDs in seventh grade, and I played them on repeat all through middle school. As I grew up, I definitely came into my own. I started reading and writing more seriously. In the beginning of high school, I got really into the beatniks, reading Richard Brautigan and Jack Kerouac, fascinated by a time where literature was influential in youth culture. Recently, I can’t help but admire every project Dave Eggers puts forth. Our society is getting less and less literary, and still, Eggers has managed to create a literary empire of sorts. Even if McSweeney’s is known for being pretentious, I still think it puts out really solid writing.

Where did you get the idea for "Too Young to Fall Asleep"?

SW: The idea sprung from a short story I wrote when I was a sophomore in high school. The story was about a young man serving in WWI and coming back injured. The whole time, he reminisced on a conversation he had with an anti-war protestor before going into the war. I changed the time frame so the story would deal with the current Iraq War. Then, my editor suggested it would be interesting if the protagonist were a young, female like myself. I didn’t necessarily jump on this idea just because I thought a young, wealthy, white suburban protagonist would come off as a whiny girl who finds fault in her very safe, stable hometown. Although, I am hoping I brought more dimension and complexity to Catherine, the main character of the novella.

What was the writing and publishing process like? Are you currently writing anything?

SW: I have been writing short stories for the last year. I have many in progress and many finished that I am trying to publish. Publishing is such a disheartening process but my work with CCLaP has definitely encouraged me, even when I get countless rejection emails. Writing the novella was a lot more structured than anything I had done before. Rarely did I map out a piece of work, and having done that now, I can’t imagine just jumping into a piece of writing without a plan. Actually, the editing process took much longer than the writing process, which is how it should be I think. Even now, it takes me a year to finish a short story. I can write the first draft in a week, but won’t deem it complete until countless revisions and reorganizations of the story are done. I always liked Hemingway’s response to an interviewer when he was asked what stumped him with the revision process. He responded, “Getting the words right.” It’s true, it takes a long time to get the words right.

What book(s) are you reading right now?

SW: I’m reading contemporary, local authors. I just read Kyle Beachy’s “The Slide”. Next on my list is Don De Grazia’s “American Skin” and Michael A. Fitzgerald’s “Radiant Days”. This summer I plan on tackling strong, female authors such as Toni Morrison and Virgnia Woolf. I am a female writer who almost always reads male authors, and I want to change that.

Which 5 books would you save if your house were to catch fire?

SW: “Franny and Zooey” by Salinger, “Dharma Bums” by Kerouac, “The Unbearable Lightness of Being” by Milan Kundera, “The Grapes of Wrath” by Steinback and a collection of Calvin and Hobbes comics.

Are you currently working, and if so, what do you? Besides become a famous author, what would your dream job be?

SW: Yes, I currently work as a nanny, and I am also on DePaul’s literary magazine Threshold. In terms of a job after college, I want to write, work in publishing or teach. In addition to my passion for writing, I am also passionate about environmental issues. I could see myself taking time off after college, working with a National Park or possibly going to the Peace Corps.

What authors/books/websites would you recommend to your audiance?

SW: I would recommend reading “Franny and Zooey” in light of J.D Salinger’s recent death and mostly because I think “Franny and Zooey” taught me everything I know about becoming a writer. Also, I had the chance to hear Stuart Dybek read this year and since then, I have become obsessed with his fiction. When I read his work, I am in awe at first, then severely jealous. I just wish I could write stories like him.
Posted by TNBBC Super Mod at 6:43 PM