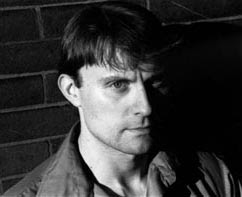 David David Katzman is the author of Death by Zamboni, an intensely twisted, trippy novel of a private detective who is quite likely out of his mind. It reads like a lucid dream, or a drug laced spoof on detective noir! Very funny, very experimental stuff!

He selflessly sent me a copy of his novel when I stumbled across it on Goodreads. David is a self published author,with a great sense of humor, and he is currently working on his second novel. Here is his author profile from goodreads, and his webpage daviddavid.net:

"David David Katzman is powered by polyester and ancient spaghetti with magical properties. A painter, writer, comic book addict, contemporary art lover and recovering actor, David² resides in Chicago with two cool cats and something, something, something. Death by Zamboni is his first novel. And yes, his first and middle names really are David."

I want to thank him for taking the time to answer some questions for yours truly! And here we go:

At what age did you start writing and can you tell us about the first story you ever wrote?

I would trace my early writing to ‘round about 6th grade. It took the form of mapping out Dungeons & Dragons adventure scenarios. I feel that my experience playing D&D contributed significantly to my creativity, my problem-solving skills, and my attraction to half-Elven Druids. My first complete short story was a dungeon adventure involving the hero swinging on a rope over a horde of monsters to escape. In my novel, Death by Zamboni, there is a scene where the main character swings on a microphone cable over a horde of blood-thirsty surgical patients. It’s a callback for all my fans from middle school.

As I recall, my second short story was a noir private investigator story influenced by Hemmingway whom I was reading at the time in English class. I re-read that story a few years ago, and it really isn’t too shabby. A little bit obvious at the end with a shoot-out in a church and a bullet piercing the stained-glass heart of Christ, but it was High School after all. These things are to be expected.

Who are you most influenced by?

I don’t have a single primary influence. I approach each individual work with an attitude of finding the voice best suited to it. The work (or my subconscious) will pull me toward a structure, style and tone. I let my freak-flag fly and then later, when I try to explain it to people, I’ll realize…oh, I must’ve been channeling an episode of the Brady Bunch if it had been written by J.G. Ballard.

To demonstrate my mood swings: my first novel was (in retrospect) most influenced by Monty Python, Firesign Theatre, South Park, and Mark Leyner. My second novel is most influenced by Lewis Carroll, William S. Burroughs, Grant Morrison, Siddhartha and Nietzche.

I’m also quite influenced by artists. Mark Ryden, Todd Schorr and Alex Grey have all influenced my second novel. I spent quite a bit of timing visualizing scenes as tableaux similar to the work of these artists.

What is your favorite novel, and why?

Ouch. Choosing a favorite novel is like admitting you have a favorite child. So cruel. Here are a few of my favorites and why. In no particular order:
At Swim-Two Birds (Flann O’Brien was one of the most creative and hilarious writers who ever lived.)
Naked Lunch (Burroughs’ words are like fire; he makes me uncomfortable and amazed.)
Siddhartha (The story of Buddha is calming.)
The Circus of the Earth and the Air (A strange trip that I loved for being both impenetrable and compelling)
Swann’s Way (No one be writing better than Proust do is.)
Hitchhiker’s Guide to the Galaxy series (I would make love to Douglas Adams if I was gay, and he wasn’t dead.)
Foucault’s Pendulum (This was a perfect book because I read it on a perfect summer day while lying in the luxurious grass beneath a tree atop the wall surrounding the city of Lucca in Tuscany.)

Describe your book in 5 adjectives.

Death by Zamboni was athletic, impetuous, sugary, heart-felt, and fragrant.

How did "Death By Zamboni" come about?

I free-form wrote without attempting to judge or direct myself for about a year. At some point, I recognized a form within the formless and reorganized the material, made new connections, wrote new material, and began the re-writing process. I completed about 6 drafts of it over the course of the following year. Then I wished up on a magic toadstool and voila. Book!

What are some of the positives and negatives of self-publishing?

For a fuller exploration of these issues, you can follow my blog (at goodreads.com/daviddavid), which is a blow-by-blow of my efforts to publish my second novel.

Pros of self-publishing:
• You will make significantly more money per book you sell. (Published authors give up a significant percentage to publishing companies and literary agents.)
• Even if you find a publisher, you will still have to do most of your own marketing so why give them so much money when you have to do so much non-writing work anyway?
• You own all rights and control every detail of your work. (Many publishers will make decisions without your input, such as cover design and back-cover copy).
• You can keep your work available indefinitely. (If a published book does not sell very well in the first few months, large publishers will rarely do a second printing, and your book will disappear.)
• You can get your book out into the world quickly. (Finding a publisher can take years and then it may be a few more years before it goes to press—if you are lucky. Since very few authors land publishers, your book might sit in a drawer, in the dark, eating dried bits of bologna for your entire life. How sad.)
• A publisher might pick you up later.
• You dance indie, DIY, non-corporate style.

Cons of self-publishing:
• More effective for non-fiction.
• You are responsible for every detail.
• You have to invest money upfront on design, printing, distribution and more. Although now some authors are going Print-on-Demand with little attention to design, I think this approach doesn’t give your book a very strong chance of becoming as popular as it deserves, simply due to the fact that people DO judge books by their cover.
• You need to work harder to get bookstores and libraries to carry it.
• You have to teach yourself the basics of publishing, promoting books and running a business.
• Still does not get a lot of respect (which makes it harder to get reviews), but that’s changing.

Can you give us a sneak peek of your second book?

You might be able to gather a bit of its nature from the influences I described in your second question. The book is entitled A Greater Monster and for the sake of Pete, I’m calling it a Psychedelic Fairytale.

What is your take on E-books and E-readers, as an author and a reader?

I do enjoy the tactile aspect of reading, and I find reading words on paper is easier and more enjoyable for my eyes. And I don’t like to piss my eyes off. On the other hand, e-books do seem to be more environmentally friendly and take up less shelf-space. However, if civilization collapses into a Road Warrior-style world someday, e-books won’t fair so well. I like to think that centuries from now, someone can burn my book to cook up a dead rat. Take that e-book!

E-books will make self-publishing a bit easier as they become more popular. The upfront cost of publishing a book will be further reduced and reproduction of e-books is essentially free. I also think that e-books will allow for some creative cross-media work. My second novel has three multi-media aspects to it. One scene is fully illustrated. Another scene is linked to a website where you can hear an original musical composition connected to the story that I co-composed with several musicians. A third scene is represented with animation, similarly hosted on a website. In a future version of e-Readers, I will be able to embed both the song and the animation into the book itself, I imagine.

What authors/novels/ websites would you recommend to our audience?

I’ll give a shout out to a few of my favorite more obscure works: The Alphabet Man by Richard Grossmen is a mind-blowing work of prose poetry and design splendor. Flan by Stephen Tunney is the weirdest and perhaps most disturbing book I’ve ever read. The graphic novel series The Invisibles by Grant Morrison is an epic brainbender. The Fan Man by William Kotzwinkle made me laugh a lot but not as much as Wake Up, Sir! By Jonathan Ames. Destroy all Monsters by Ken Hollings is as cool as a James Bond nightmare, Gojiro by Mark Jacobson is too much fun, and Angry Young Spaceman by Jim Munroe combines science fiction with politics in a way that no one ever has before. Hairstyles of the Damned by Joe Meno deserves attention, and I’m looking forward to reading more of his books soon.

As far as websites go, have you been to this google.com? It’s pretty handy! And that icanhascheezburger site is hilarious! I’ll be here all night folks, tip your waitstaff. But seriously. I really dig goodreads.com, where I have my blog and write reviews. Selfpublishingreview.com has some interesting articles as does Poets & Writers (pw.org). You can see the art of Mark Ryden at markryden.com, Todd Schorr at toddschorr.com, and Alex Grey at alexgrey.com. Some day I will dust off my website at daviddavid.net. Last but not least, I’m very impressed with the caliber of authors interviewed on thenextbestbookblog.blogspot.com. Worth a look. 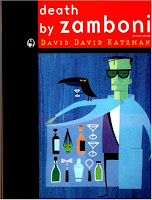 Hahaha... David, thanks for the shout out to my own blog! That was so sweet. If you haven't heard of him yet, it's not too late to check David out, and read Death By Zamboni.
Posted by TNBBC Super Mod at 2:52 PM