Richard Fulco's Would You Rather

Bored with the same old fashioned author interviews you see all around the blogosphere? Well, this series is a fun, new, literary spin on the ole Would You Rather game. Get to know the authors we love to read in ways no other interviewer has. I've asked them to pick sides against the same 20ish odd bookish scenarios... 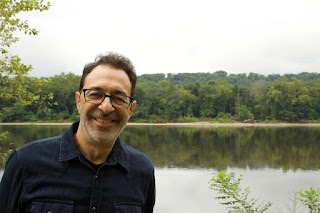 Tongue. I hate the sight of my feet. Writing with my tongue would be more tactile. Tongue.

ONE GIANT BLOCKBUSTER. I have interviewed several songwriters who have had one blockbuster song: Steve Forbert and Freedy Johnston (to name a couple). They told me that their hit song afforded them a career. Sure, they have to play “Romeo’s Tune” and “Bad Reputation” at every show, but the success of their one hit song has opened several doors.

I’d like to experience success as a living writer. I’m no genius, just somebody who can write, has something to say and hopefully others will relate to my stories.

I don’t do tattoos, so I guess it would be the latter.

What’s the point of writing if you don’t remain true to yourself?

I don’t do tattoos, so bloody red ink. I guess. Weird question.

As a playwright, I’d love to meet my characters for a beer.

I admire some of Dylan Thomas’ poetry. I cannot fathom being in the same room as Ayn Rand, but I can see myself sitting at the bar in the White Horse Tavern.

I would not mind speak-

ing only in haiku. I

If my books aren’t adored, then I want them to be hated, banned and burned.

I don’t think I could stand on my tippy-toes for more than a minute, but I know that I can lie flat on my back for several hours at a time.

In my baby suit.

Richard Fulco received an MFA in playwriting from Brooklyn College where he was the recipient of a MacArthur Scholarship. His plays have either been presented or developed at The New York International Fringe Festival, The Playwrights’ Center, The Flea, Here Arts Center, Chicago Dramatists and The Dramatists Guild. Richard’s one-act play Swedish Fish was published by Heuer Publishing and his stories, poetry, interviews, essays, and reviews have appeared in The Brooklyn Rail, Failbetter, Across the Margin, Fiction Writers Review, Gargoyle, The Daily Vault, and American Songwriter (among others). For six years, Richard wrote about music on his blog, Riffraf. He teaches creative writing and English at an independent high school in New Jersey and interviews writers for his “5 Questions” series at www.richardfulco.com. Richard’s debut novel, There Is No End to This Slope was published by Wampus Multimedia in 2014. We Are All Together (Wampus Multimedia) is his second novel.