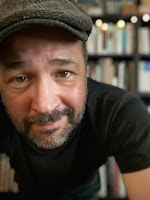 This is Aaron Angello.

Angelo is a poet, playwright, and essayist from the Rocky Mountains who lives and feels remarkably out of place in the charming, but very Eastern, town of Frederick, MD. He received his MFA and PhD from the University of Colorado Boulder, and he currently teaches writing and theatre at Hood College. His book THE FACT OF MEMORY is being published by Rose Metal Press in April.

About a decade ago, I put together a website called the Denver Poetry Map. It was basically a google map of Denver that was filled with marker icons, each connected to a poem. When a reader clicked on a marker, a poem would open in a pop-up box. It was a simple concept, but poets and readers loved it. It really got me thinking about the relationship between a piece of writing and the space in which it was written. I asked poets to submit a poem that, for them, was connected to a very specific location in the city, whatever that meant to them. Some poems mentioned the location in the poem itself (a bridge, a tattoo parlor), but for most, the connection was much less literal. Poets attached poems to places that they were drawn to, to places that somehow inspired them, to places where they conceived ideas, and to places where they wrote. To me, the most interesting relationships between poem and place were the least literal, the poems that the poet could not separate in their mind the poem from the place, even if the content of the poem didn’t seem to connect to the location at all. The more enigmatic the relationship, the more interesting. 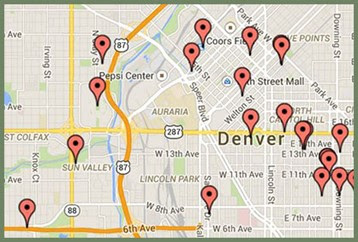 I like to think of poetry and lyric essays as records of thought processes. Each of them allows a kind of expression of thought that can only be expressed in that form. Both allow for disjunction and for multiple, complex meanings. Sometimes they meander, sometimes they are concise, often they meander in a concise way. As readers, if we read well, we kind of share in the patterns of thought that are presented. In his “Defense of Poetry,” Shelley wrote that a person (not just a poet) “must imagine intensely and comprehensively; he must put himself in the place of another and of many others; the pains and pleasures of his species must become his own. The great instrument of moral good is the imagination.” He goes on to specify that “poetry strengthens the faculty which is the organ of the moral nature of man.” He’s writing about empathy, of course, and man, I love that. The writer must have empathy for others, certainly, but also, the poem allows the reader to share an experience of thinking with the writer.

One thing that the Denver Poetry Map taught me was that the thinking that is expressed in a poem is directly connected to the place in which the poem was composed. The reader, then, can empathetically connect with the poet, and by extension the place. Once the reader has read the poem, the place it’s connected to is forever altered in their minds. There is a circular bond that connects a physical pace, a poet’s mind, a poem, a reader’s mind, and the place again.

So, place matters. A lot. Yet, I don’t know if I can entirely identify why that is. I think about it all the time. I think about the power of remembering a childhood bedroom, the feeling one gets when they drive by their old high school, the overwhelming sensation one feels when they go back to that bar where they met a lover.

I also think about what a place does to the physical body. Does it invite the body to stretch out or constrict? Is the movement in the environment around the body that can be sensed, or is it still and quiet? Are the people or animals near the body or is the body isolated? Is the physical body larger than the objects near it or is it surrounded by giant objects? Is the environment natural or built? The place affects the body which, in turn, affects patterns of thought. I am convinced that any place one chooses to write is going to have a massive impact on the work that is produced in that place.

When I wrote the first draft of The Fact of Memory, I was living in a one-bedroom apartment in Boulder. I was doing a kind of daily, meditative practice where I’d get up before the sun, sit in a straight-backed chair that was adjacent to a large, sliding glass door, meditate upon a word from Shakespeare’s 29th sonnet, and then write. It was a profound and productive practice for me. Because there are 114 words in the sonnet, it took a while. (This is a photo of the herbs from my wife’s Instagram, but that’s the chair and that’s the window.) 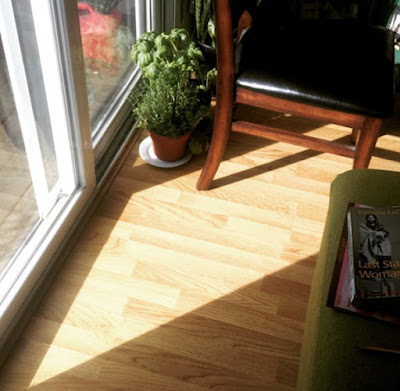 Late in the process of writing that first draft, my wife and I went to California to visit a friend. We stayed at a beautiful little place in Palm Springs with lots of desert light and a swimming pool. I kept up the process of getting up early each morning and writing, but the stuff I was writing was entirely different – tonally and in the treatment of the content. Instead of sitting in the dark, looking out on a Colorado winter, I took my notebook to a lounge chair in the sun by the pool. I wrote, but what I produced just wasn’t a part of the project I was working on. It didn’t fit at all. It moved differently, and the intellectual engagement was of a different kind entirely. (Actually, I don’t recommend writing poolside – there’s no struggle in it. If you find yourself in that situation, I suggest just having a cocktail.) I ended up rewriting almost all of what I wrote on that trip.

Now, I live in Maryland. I’m currently writing this little essay in my office on the campus of the college where I work. It’s small, windowless, and a bit cluttered, but it suits me well. I find myself fighting the urge to answer emails or grade papers, which is no doubt affecting what I am writing, but this is a good place to think and to write. 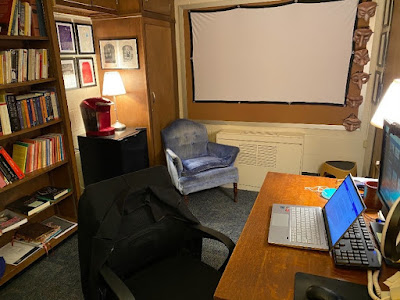 Last spring, I wrote a play at a cheap little plastic table in my backyard. I wrote every morning with a cup of coffee and Max Richter and Philip Glass in my headphones. The air was lovely in the mornings, the birds were doing their bird thing, and my imagination felt unfettered. It was easy for me to slip into that liminal space where creative stuff happens. It’s like twenty degrees outside right now, though, so that’s not in the current mix. 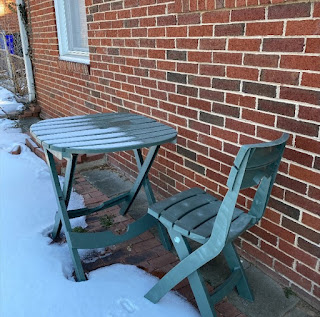 I like to work on poems on a little fold-up Formica table in my kitchen. This is also where I prepare food, so it’s often messy, and there’s always a connection to food when I’m there writing, for better or worse. 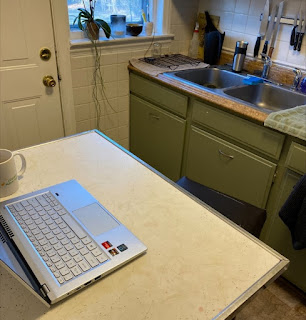 Ultimately, I like to try different writing spots out. I write in cafes; I write while sitting on park benches; I write on public transportation. I mix it up a lot. What I know is this: I need to move around if I want to continue to explore new ways of thinking in my writing. If I hit on a project, though, I need to stick with a spot.