There were so many unusual or artistic films adapted from books that I could have included, like Kwaidan (so beautiful), Mishima: A Life in Four Chapters (again, beautiful), Call of Cthulhu (love to see modern silent films) and Viy (Gogol!). In the end, however, I can only choose five, so I picked the absolute strangest, and my absolute favourite, films adapted from literature.

The Fall of the House of Usher (1928, James Sibley Watson and Melville Webber)

At least two film versions of Edgar Allen Poe's short story were released in 1928; Jean Epstein's beautiful, dreamy version co-adapted with Luis Buñuel (who quit due to creative differences) and this short version by French Impressionists Watson and Webber.

It's unlikely the audience would have had a clue what was happening unless they were familiar with the source, but that's not terribly important as it’s more about a feeling and the characters’ subconscious and imagination. It’s strange, pretty and very surreal. The camera lurches uncomfortably and dreamlike shadows drift across the screen, culminating in a barrage of mind-whirling camera trickery. Also, you have to admire Madeline's fabulous outfit.

Another, more modern, adaptation worth a watch is The Bloodhound, which is very understated while also addressing the character’s subliminal fears.

Otsuichi (pen name of Hirotaka Adachi) adapted the script, made of five segments, from his own short stories. Each is an unpredictable curio, with even the trope of girls locked into rooms by a murderer taking an unusual angle. One of my favourite segments is a boy struggling to cope with his seemingly dead parents, both insisting they lived while the other died in a car crash, both apparently unable to see the other. Are they both ghosts? Is one still alive? Is a dimension shift happening? It’s a bit of a shame (in my opinion) that it explains too much at the end, but the explanation itself is slightly barmy which saves it.

One of the most hauntingly odd films I’ve seen adapted from an equally strange book released in the seventies. The book contains photographs and newspaper articles of sad and strange happenings in Wisconsin during the 1800s, when the endless snowy months drove its inhabitants to madness and despair.

The film includes narration of articles over re-enactments, with the entries to the insane asylum whispered eerily. Some of the stories are quirkily uplifting such as the opera singer, no longer in her prime, who moved to Wisconsin from the big city and gave a denture clacking concert.

Mixed with these black and white stories are scenes of modern Wisconsin in colour with locals discussing their home state. While these are interesting, I do feel they remove the viewer from the immediacy of the hard Victorian winters.

In this version of the classic fairy tale, with strong elements of It’s a Good Life by Jerome Bixby, the children are the creepy ones. Eun-soo just wants to visit his sick mother and get home to his pregnant girlfriend but crashes his car by a forest, where a girl leads him to a magical looking house populated by three children and their parents – or at least that’s how it seems.

It’s visually wonderful, filled with rainbow cakes, pagan symbols, bright colours and old toys evoking those unsettling Edwardian Christmas cards. The mystery deepens as each of Eun-soo’s escape attempts fail while the children become increasingly threatening and, I said it, annoying. However, in the end, you can’t help but feel sorry for (almost) everyone involved.

Bill Morrison’s films give me the uneasy feeling that I’m watching the videotape in Ringu, particularly Decasia. This one strings the archival footage that Bill is known for together to loosely recreate the story of Mary Shelley’s Frankenstein. The different story segments are announced by chapter headings and we’re often placed in the “monster’s” POV as he watches the family go about their business on the farm or endures suspicious stares from city dwellers.

As with the House of Usher it helps if you know the story because it’s completely without dialogue and intertitles. However, it's such a loosey goosey adaptation, that the main intrigue comes from the historical value of the archival footage and the trippy scenes you can zone out to. I think my favourite bit is the petri dishes and bacteria of Frankenstein’s laboratory (patched rhythmically together from educational films) while Dave Douglas’ jazz score goes absolutely nuts, very cool. 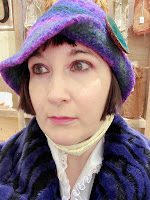 Madeleine Swann's collection, The Sharp End of the Rainbow, was published by Heads Dance Press and her novella, The Vine That Ate The Starlet, was released by Filthy Loot.

Her collection, Fortune Box (Eraserhead Press), was nominated for a Wonderland Award. Her short stories have appeared in various anthologies and podcasts including Splatterpunk Award nominated The New Flesh: A David Cronenberg Tribute.