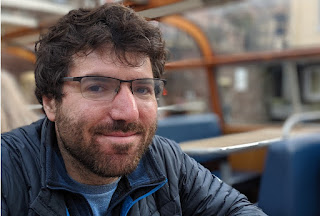 This is Shawn Rubenfeld.

Shawn has had short fiction appear in journals such as Permafrost, Columbia Journal, and Portland Review. A native New Yorker, he earned an MFA from the University of Idaho and a Ph.D. in English and Creative Writing from the University of Nebraska-Lincoln, where he is currently a Lecturer. His first novel, The Eggplant Curse and the Warp Zone, is due out in May 2021 from 7.13 Books.

Today, there is snow where I write. But tomorrow there might be grass--stray cats, lilacs, cucumbers in garden cages. I’ve moved around a lot and so has my desk. It’s faced six different windows in five different neighborhoods in two different cities in the last six years. The desk itself doesn’t ignite anything in me. It’s always the window. Or, I should say, the world I see on the other side of it. Last year it was a gravel driveway in the alley, a garage at such a bad angle that the neighbors hit it everytime they tried to back out. Once, the back tires launched a rock at my desk which stayed lodged between the screen and the window until it was time to move again. Before that it was a yard encapsulated in a tall wooden fence with overgrown dogwoods and evergreens. And before that, in another city, it was a busy street where I’d watch the same trooper hide behind a shed with a speed gun. Once, when I was having a particularly good writing day (working on the first draft of The Eggplant Curse and the Warp Zone), a car pulled off that street and stopped in front of my house. Then a dude opened his door and projectile vomited over every inch of the driveway. But my current view, I was able to choose. When my wife and I started the home buying process this time last year, the view from my desk was a big consideration. The view that we chose looks out over our large, fenced backyard.

We’re all settled in now and these days, the window shows me the fruits of my labor. When we first bought the house, the yard was one of those unremarkable flat lawns encircled by a low chain-link fence tended to by grandmas. A lilac bush in the back corner that blooms fragrant purple flowers in May. Rusted clothesline poles, bent from a long fallen tree branch. 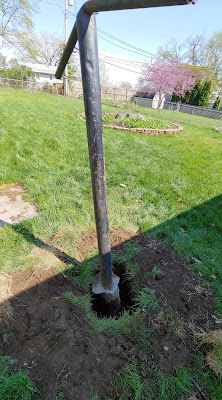 Since my wife and I spend much of the summer outdoors, we knew that we would have to put some elbow grease into making this yard our own. Driven by oncoming warm weather and wanting to grow our own vegetables, we built two large garden boxes the weekend we moved in. Shortly after, we dismantled the short retaining wall around a large tree stump in the center of the yard left by the previous owner after the tree blew over the previous spring. This was the worst of the projects; blazing sun, entangled garter snakes unearthed under every paver.

Then came the patio and privacy screen. We agonized over the color of the concrete for weeks, deciding on a soft sand color the day before the pour began. Landscaping came next, with large flower beds etched into the lawn covered by mulch left from the ground out tree stump. We planted skinny evergreen shrubs that barely reached the top of the fence, watering them almost daily in hopes they would soon provide some shade and privacy. We lined the back fence with two more lilac shrubs, honoring the old women who tended the yard before we took ownership. Several varieties of herbs were thrown in, in hopes to disway the stray cats from sunning their bellies in our beds and catching a cat nap under the existing shrub. 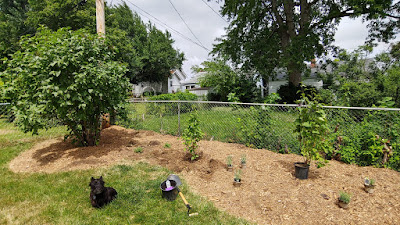 As the summer wore on, the work slowed and we harvested cucumbers, tomatoes, peppers, and zucchini from our garden boxes. Unfortunately, we didn't grow any eggplant. Amidst the bustle of creating our oasis, I always found time to sit at my desk, write, and look outside.

We still enjoy garden salsa, canned tomatoes, and pickles as a reminder of our first summer in the house, but all I see now when I look out the window is snow on top of snow, disguising so much of the work we performed this summer. Some years in Nebraska, it feels like the winter will never end. But of course it always does and then it'll be back to work. Maybe there’s a metaphor for writing in all of this? For the opportunity to start over? For making something your own? For telling the stories that you want to tell? For putting in the work? For getting it finished? It's there somewhere, like our yard buried beneath the snow. 48 inches since December, more than three-times the annual average. 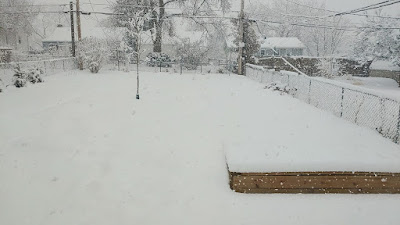 Whatever it will come to look like this summer or next--behind this house or yet another one--I feel quite fortunate to have a space of my own that I can see whenever I sit down to write. Because that's work, too, that never ends, and I wouldn't want it any other way.