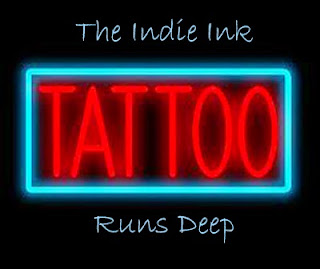 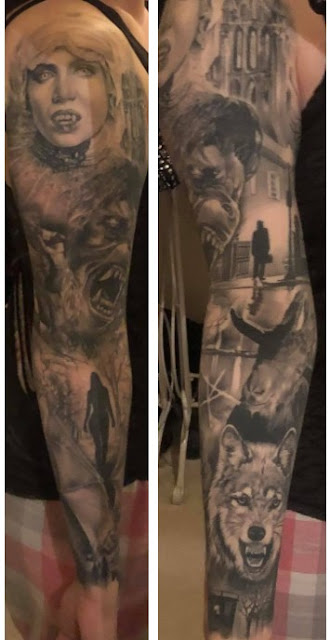 My horror sleeve started with the wolf on my forearm, back when I didn’t know I was going to add anything else afterwards. I’d always wanted a sleeve but for some reason, it didn’t occur to me to plan for one before I started work on my arm. My tattoo artist (Chloe Black – she’s amazing!) lovingly created this wolf for me and then soon afterwards, I told her, “hey, so I want to turn that into part of a sleeve now”. I’m sure tattoo artists just love it when they spend hours drawing, placing, and tattooing a one-off piece just for the client to then tell them they have to retroactively fit it into something else. Still, she was very lovely and accommodating when I told her that I wanted to have a full horror piece, and we started building around it, one image at a time. 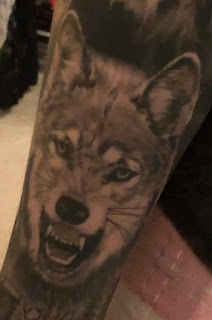 The wolf that started it all is the most personal part of the overall piece. I’d gone through something and was inspired by song lyrics about inner strength/the inner wolf, etc. I know it’s cheesy but hey ho – that’s why it’s there!

The bat came next. Come to think of it, the bat came before I’d decided or told Chloe that I wanted to develop it all into one big piece. Oh God… I must have started as a nightmare client for her, now that I think about it, because she had to try and work a theme in around two disconnected pieces that took up considerable space. 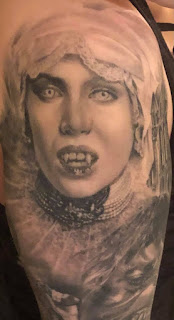 Lucy (from Francis Ford Coppola’s version of Dracula) was the first proper “horror” part of my horror sleeve, and she’s my favourite! I decided to go down the supernatural route when deciding what I wanted in the sleeve, and vampires and werewolves seemed like a good way to tie in the wolf and bat that were already there. Lucy is one of my favourite horror characters ever. She’s my favourite in the story and I love FFC’s iteration of her. I even got to play her in a theatre production of Dracula once (though not nearly as well as Sadie Frost, I regrettably add!) The building next to her is Carfax Abbey. I have another little Dracula piece on my wrist – Dracula’s carriage and horses travelling through the mountains. This was Chloe’s idea and she spent an unbelievable amount of time searching for a decent picture to go from, and ended up playing and pausing the movie and taking a screenshot to get it.

At this point, I have to say that deciding the few things I had space to include from allllll of horror was so difficult! I love so many things and trying to pick was almost like torture. 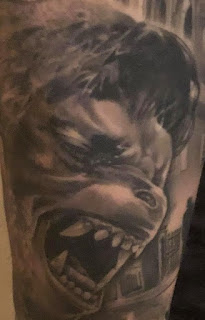 An American Werewolf in London, the poster image was outlined at the same time as Lucy, and both were filled in and finished later. It’s not only my favourite werewolf film but it’s also easily in my top 5 favourite films of all time.

The Exorcist, poster image was added next. I briefly considered a picture of Regan’s face first, but she’s too scary, so I went with the iconic poster image instead. I know Lucy’s a bit scary to some people, but I think she’s pretty. Regardless, there’s a big difference between a fangy vampire lady and then a possessed child with an almost green, wounded, evil devil face.

From the devil, it felt only natural to go ahead and fill most of the remaining space with witches, hence the little The Blair Witch Project inclusion, and both the poster image (just realised, I sure like those poster images) and Black Phillip, the goat, from The VVitch. I really love Black Phillip (as does my 4 year-old niece, who told me my arm is ugly except for the “happy goat”). How I laughed and laughed when she said that, after crying and dying a bit inside after her cutting comments about the rest of the artwork that I worked so many hours to afford.

The last piece of the sleeve was the most difficult to decide on because it was the last spot to fill, and I had about 20 movies that I was agonising over. John Carpenter’s The Thing and Ridley Scott’s Alien are my 2 favourite horror movies of all time, but there were problems with including either of them. Because the sleeve is in black and grey and was already so dark, we couldn’t very well stick a xenomorph in there. A xenomorph deserves to be noticed!

The issue with getting anything from The Thing is that, while the creature design and effects are spectacular.. it’s just… you know, ugly. I love horror but I didn’t particularly want something gross tattooed to my arm forever. Besides, using anything from either of these films would ruin my overall theme, because the monsters are aliens and fit under sci-fi horror, not supernatural horror. 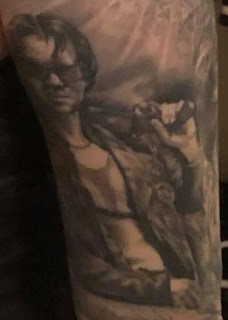 Just when I thought I wouldn’t be able to ever decide, I thought back to the start of the process, when I was all focused on vampires and werewolves, and thought OMG how could I forget about Near Dark. I don’t know why it’s so underrated, but that is a beast of a vampire movie and so I went with the character of Severen, played by the late great Bill Paxton.

Kayleigh Edwards is a writer obsessed with all things horror, living in the valleys of South Wales, UK. She hopes to one day write herself out of having to do jobs she hates, which is anything that forces her to leave her house and her books.