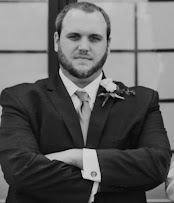 This is Wile E. Young.

Wile is from Texas, where he grew up surrounded by stories of ghosts and monsters. During his writing career he has managed to both have a price put on his head and publish his southern themed horror stories. He obtained his bachelor’s degree in History, which provided no advantage or benefit during his years as an aviation specialist and I.T. guru.

Wile and Stephen Kozeniewski recently collaborated on the horror novel The Perfectly Fine House, released this past March with Grindhouse Press.

I’ve had the privilege to write all over the world due to the time I spent studying abroad for college. Ski slopes in Zermatt, Switzerland; cafes in Budapest, Hungary; my dormitory in Vienna, Austria… All of these places were joys to experience and, more importantly, feed off of for inspiration, but nowhere has quite the allure of my family’s lake house on Caddo Lake.

Located on the Texas/Louisiana border in Uncertain, Texas, it has served as my home away from home for several years. I think I was around ten when my family first purchased the house. 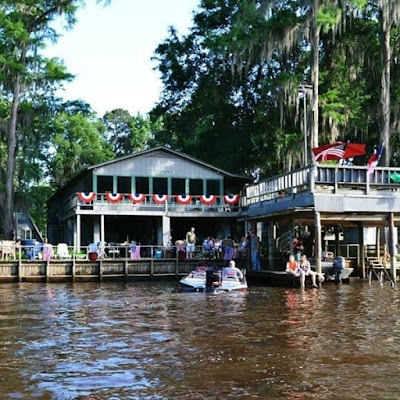 It was originally envisioned as a place that each main branch of our family would take a weekend of the month to use: my parents and myself, my paternal uncle and aunt along with their respective children, and my grandparents. However, my grandparents took their first weekend and never left, which just goes to show the pull that this place has.

The whole area is a mass wetland of rivers, bayous, and creeks that run out into a vast lake, and like most places that trace their origins back past a century, it’s filled with its own stories and legends. 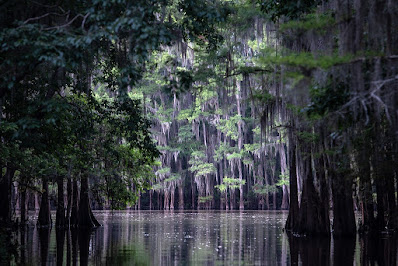 Purported to be the oldest natural lake in Texas, Caddo was supposedly formed in the Great Madrid Earthquakes of 1811-1812. The lake was used to ferry supplies between Jefferson, Texas and ports in Louisiana, and even all the way down to New Orleans. 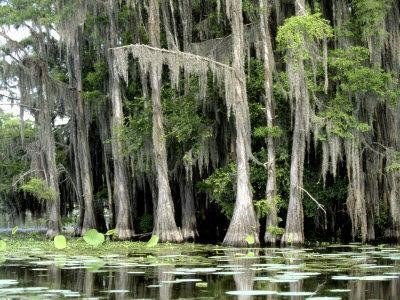 When the Great Log Jam on the Red River was removed, it lowered the lake by a good ten feet and destroyed the steamboat industry. As of 2020, there is only one steamboat that still plies its trade on Caddo Lake and that is the Graceful Ghost, though even it has been berthed until it undergoes repairs. 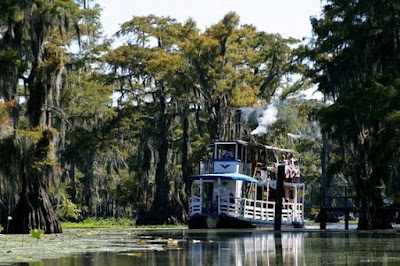 But the best part of growing up down there were the stories and characters that resulted. It was partially because of these characters and locations that I set my debut novel Catfish in the Cradle there, which takes place mainly in the town of Uncertain. From the time I was very young we would take a sojourn to eat breakfast at Shady Glade Café. 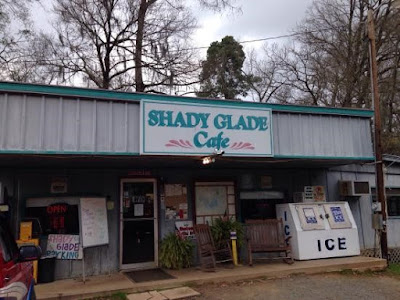 The place was like a real life Mos Eisley Cantina. You’d have the old fishermen talking about their catches or what they’d seen out on the river, tourists from Houston and Dallas eating their fills of that Uncertain cuisine, and the owners and staff bustling around chatting up the regulars.

There were so many meals partaken in that place after both tragedy and triumph. When my grandfather passed, we ate in his memory under his picture on the walls (he was quite popular there, even had a meal named after him) and I ate there the morning following the engagement to my now wife.

You can find me in Shady Glade from time to time, typing away. If you recognize me, sit down; I’ll buy you a coffee.

Caddo had a lot of legends; twenty-foot alligators, giant fish, ghosts in the trees, etc. All of these are probably based on some truth where someone saw something that they couldn’t quite explain. After all, Caddo has more sightings of Bigfoot than anywhere else in East Texas and people have caught some truly astonishing fish there. 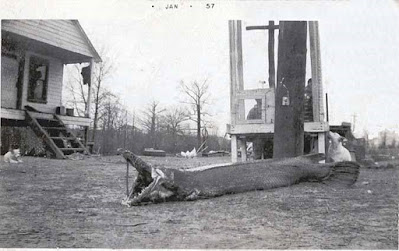 This has all contributed to stoking the fires of my imagination, the legacy of the swamp and river running like muddy water through my veins. It truly is a land of infinite stories and I could spend an eternity sitting out on the river letting the muse take over and I’ve often commandeered my grandfather’s desk to do just that. 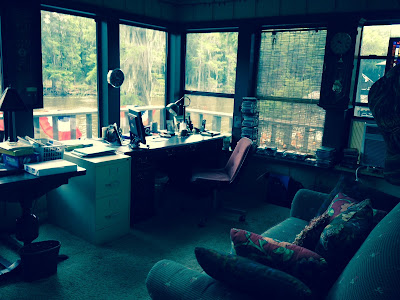 This is where I love to write the most. My grandfather conducted most of his business here and it’s where I feel the most connected to him so I can continue carrying on his storytelling tradition.

Every time a boat passes, an owl hoots in the night, or I hear a gator hissing from somewhere, all I can think about is that it’s good to be home and what a pleasure it is to be able to write here.