We're happy to help Meerkat Press support the release of their latest title The Attic Tragedy by participating in their blog tour.

For today's stop, J. Ashley-Smith would like to introduce you to one of his favorite books:


J. Ashley-Smith recommends
The Sailor Who Fell From Grace With The Sea by Yukio Mishima

As a student, way back in nineties Sheffield, I had an obsession with thrift store book finds. I was studying film and creative writing and had a voracious, directionless reading habit, fuelled almost entirely by random discoveries on the shelves of this or that charity shop between my house and the campus. I judged every book by its cover, bought anything that aligned with my aesthetic of the time – mostly mass market paperbacks of the sixties and seventies. This was how I discovered Japanese author Yukio Mishima and his incomparable classic, The Sailor Who Fell From Grace With The Sea.
The first copy I bought was the 1976 Penguin edition, a tie-in with the movie released that year (a shamelessly westernised adaptation, which I have still never seen and am not endorsing here). That version has a squint-eyed and beardy Kris Kristofferson, hair tousled and wafted in unseen ocean breezes, gazing into the distance. I thought the cover was kind of cool and was sold on the blurb:

After five years of celibate widowhood, Fusako consummates her two day relationship with Ryuji, a naval officer self-convinced of his glorious destiny… and they are spied on by Fusako’s son, Noboru, a self-possessed thirteen-year-old, ‘No.3’ in a sinister élite of precocious schoolboys.

While the back cover text alludes to the wonders inside the book’s 150 pages, it does nothing to convey the intensity, the beauty and stark horror of this perfect novella. There is something about this length of book, the short novel, that is like a swift gut punch. The opening pages – which depict with cold detachment, the killing and dissection of a neighbourhood cat by a group of prepubescent boys, led by the otherwise unnamed ‘Chief’ – set the tone for what proves to be an incredibly bleak, incredibly beautiful tale of glory and betrayal.

The story is simple: the collision of three dynamics embodied by the sharply drawn central characters. The romanticised longing of the sailor, Ryuji, for some inarticulate glory awaiting him at sea (a longing artfully penned by Mishima to be both transcendent, absurd, and painfully, pathetically human). The loneliness of Fusako, kept always at arm’s length for the sake of her son – the son she believes, mistakenly, to be in need of a father. And Noboru himself, highly intelligent and intense, his learned ’objectivity’ a rationalisation for the prevailing culture of sociopathy among his gang of school friends.

Noboru’s interest in ships leads Fusako to take him to visit a commercial steamer. There they meet Ryuji, the ship’s second mate, and both mother and son are charmed by the sailor, though for entirely different reasons. Fusako and Ryuji become immediately involved in a brief romance, while Noboru is inspired by what he sees in Ryuji as a kind of perfection, the quintessence of those ideals espoused by his highly intellectual and rigidly moral gang. Through a peephole in the back of his chest of drawers, Noboru watches his mother and the sailor make love. As long as the sailor leaves and abandons Fusako, Noboru rationalises, then that perfection he first saw will remain intact.
But Noboru’s detached infatuation with the sailor quickly pales, as one after another incident reveals Ryuji’s flawed humanity, his less-than-perfection. When the sailor and Fusako become engaged, Noboru’s sense of betrayal reaches its peak.

The second half of the book is an agonising descent towards tragedy. When Ryuji returns from the sea, he remains on shore and his ship leaves without him. His attempts to ingratiate himself with the boy, to wear the ill-fitting uniform of loving father, are entirely at odds with Noboru’s own desires – and the philosophy of his gang, who have a particular resentment of fathers and father figures. Fusako’s attempts to domesticate Ryuji, installing him as a manager in her fashionable boutique, only serve to emasculate him further in the eyes of Noboru. As the wedding draws near, the boy calls an emergency meeting of his gang. Something drastic needs to be done. Something glorious.

It’s so hard to write here all that I love about this novella. The story – its perfect, utterly horrific ending, at once surprising and inevitable – cannot be encapsulated in any form other than itself. If I write too much, I fear I’ll do more harm to it than good. And there is so much to say about Mishima himself, that author as troubled, complex and problematic as his own characters – the repressed homosexuality, the right-wing nationalism, the failed coup, the ritual suicide…

Nothing I have read, before or since, has had so powerful an impact on me, both as a reader or as a writer. This slender, immaculate book is infused with darkness, with a potent aliveness that is intensely human. A work of literary horror of the highest order, The Sailor Who Fell From Grace With The Sea captures with art and precision the beauty and brutality, the monstrousness and transcendence of the everyday, constructing from its architecture of minor betrayals a tragedy of Shakespearean grandeur. 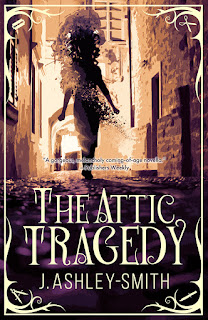 SUMMARY:
Sylvie never called them ghosts, but that’s what they were—not that George ever saw them herself. The new girl, Sylvie, is like a creature from another time, with her old-fashioned leather satchel, her white cotton gloves and her head in the clouds. George watches her drift around the edge of the school playing fields, guided by inaudible voices.

When George stands up for Sylvie, beating back Tommy Payne and his gang of thugs, it brings her close to the ethereal stranger; though not as close as George would have liked. In the attic of Sylvie’s father’s antique shop, George’s scars will sing and her longing will drive them both toward a tragedy as veiled and inevitable as Sylvie’s whispering ghosts.

J. Ashley Smith is a British–Australian writer of dark fiction and other materials. His short stories have twice won national competitions and been shortlisted six times for Aurealis Awards, winning both Best Horror (Old Growth, 2017) and Best Fantasy (The Further Shore, 2018). J. lives with his wife and two sons in the suburbs of North Canberra, gathering moth dust, tormented by the desolation of telegraph wires.