Suzanne Burns' Would You Rather

Bored with the same old fashioned author interviews you see all around the blogosphere? Well, TNBBC's got a fun, literary spin on the ole Would You Rather game. Get to know the authors we love to read in ways no other interviewer has. I've asked them to pick sides against the same odd bookish scenarios. 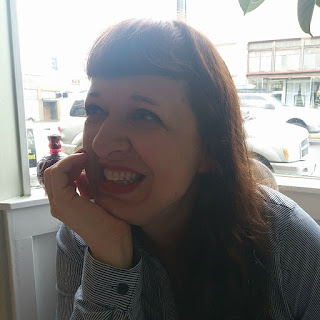 Would you rather write in an isolated cabin that was infested with spiders or in a noisy coffee shop with bad musak?
I could handle the cabin during the day. I’m quick and excitable enough to fend off any spider heading my way. Night, and sleep, and long hair is another story. But I could never write with noise and bad, or even good, musak.

Would you rather write the best book of your career and never publish it or publish a bunch of books that leave you feeling unsatisfied?
A bunch of books that leave me feeling unsatisfied. That’s the constant state of artists, isn’t it? Why else do we all keep going? But if I did write the best book of my career and never published it, it wasn’t my best book.

Would you rather have everything you think automatically appear on your Twitter feed or have a voice in your head narrate your every move?
Twitter, because I’m not on it so would never check it. That way when I get weird, think PMS when potato chips for dinner combined with stalking exes on Facebook sounds like a good idea, I’d be oblivious.

Would you rather your books be bound and covered with human skin or made out of tissue paper?
Tissue paper. I have a suspicion that no one but my mom actually reads them cover to cover, anyway, and she loves collecting tissue paper. She has a large wooden box in the garage filled with the fluff.

I’ve had no one show up to a reading more than a few times, so I’m a seasoned pro.

Would you rather give up your computer or pens and paper?
Computer. I write longhand.

I think Catcher in the Rye would be a perfect fit.

Would you rather your book have an awesome title with a really ugly cover or an awesome cover with a really bad title?
You obviously haven’t see this book. This is real. Yes, she is floating over a tree surrounded by a circular rainbow and yes, she has a shaved head and side boob.

Would you rather write only embarrassingly truthful essays or write nothing at all?
How embarrassing? I don’t have to mention that one time I did that one thing, right?

Would you rather your book become an instant best seller that burns out quickly and is forgotten forever or be met with mediocre criticism but continue to sell well after you’re gone?
Instant, forgettable, burned out bestseller.

Suzanne Burns writes both fiction and prose. Her fiction most recently appeared in The Chicago Tribune. Her second short story collection, The Veneration of Monsters, published by Dzanc Books, received a starred Kirkus Review and went on to be named one of the Top 100 Fiction Titles of 2017. She is currently working on a new short story collection.