Violet LeVoit Takes it To the Toilet 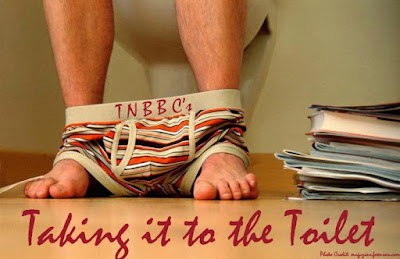 Today, Violet LeViot takes it to the toilet! Violet is a film and fiction writer who began her career as a film critic and arts journalist for TurnerClassicMovies.com, Baltimore Magazine (where she was voted "Best Arts Writer" in the 2008 Best of Baltimore awards), the Baltimore City Paper, Popmatters.com, FilmThreat.com, PressPlay.com and Allmovie.com, and was a contributing writer for Defining Moments in Movies: The Greatest Films, Stars, Scenes and Events that Made Movie Magic (Cassell Illustrated). She earned an MFA in Creative Writing from Rutgers University and is the author of the short story collections I Am Genghis Cum (2010) and the Wonderland Book Award winner I'll Fuck Anything That Movies and Stephen Hawking (2012, both Fungasm Press), as well as the novels Hotel Butterfly (2009, Loose Id) and I Miss The World (2016, King Shot Books). She lives in Philadelphia.

I've been reading J.G. Ballard's The Atrocity Exhibition while in the bathroom. In some ways it's the perfect toilet reading, and Ballard says as much so in the introduction, where he suggests not beginning from start to finish but instead dipping at random, “much the way it was written.” This deliberately obscene experimental novel (William S. Burroughs wrote its effusive introduction) is most famous for having its first British edition pulped by its publisher Doubleday in 1970 because of the threat of lawsuits from celebrities who were depicted inside having breast reductions, dying in car crashes and assassinations, and whatever the hell Ronald Reagan is doing in the chapter/short story “Why I Want To Fuck Ronald Reagan” (which I now realize must have been an unconscious influence on the title of my short story collection I'll Fuck Anything That Moves And Stephen Hawking).

“Reagan” alone is worth the purchase, for anyone interested in the far edges of postmodern nose-thumbing, and it's made even sweeter by Ballard's recollection that “At the 1980 Republican Convention in San Francisco a copy . . . furnished with the seal of the Republican Party, was distributed by some puckish pro-situationists to the RNC delegates. It was accepted for what it resembled: a psychological position paper on the candidate’s subliminal appeal, commissioned by some maverick think-tank.” This is the story's first paragraph . . .

. . . and doesn't get any saner from there. I don't need to tell you substituting a certain name for “Reagan” will evoke both a little voodoo-doll prick of schadenfreudic relief with the numb horror that Ballard, as always, is right about the modern world.

So why does The Atrocity Exhibition make such great bathroom reading? The handsome paperback edition that I own (published by Flamingo Modern Classics in 2002) is comfortable in the hands. The typeface is unobtrusive, the paper of the pages has a satisfying tooth, and the layout inside is digestible and clean. But the best thing about it is that this book that the New York Times described as “a high water mark in English experimental fiction” is organized into “condensed novels”.

I'm not sure whether Ballard intended each paragraph to be a novel, or each cluster of twenty or so paragraphs to be a complete book. Maybe both interpretations are true, in a “ontogeny recapitulates phylogeny” kind of way, with each fetal vignette mirroring the whole: the adventures of a protagonist named Talbert (or Traven, or Travis, or Talbot, does it matter?), his obsessions with car crashes, celebrities, high rises, and the Kennedy assassination, a cold and antiseptic sexual relationship with a woman named Karen Novotny, who sometimes appears as a flesh-and-blood presence stalking the concrete landscape with him, and sometimes is seen sprawling in crash photos in poses that he remarks are pathologically erotic. A doctor appears here and there, always bearing morbid forensic artifacts in a way that reminds me of the reassuring physicians in 1950s cigarette advertisements, their head mirror headdress gleaming as if it was the crown of Thoth.

It's never explicitly explained this way, but Talbert's scattered attention is because of how fractured his powers of concentration have become in a media-colonized landscape, and how the interbleeding of death and fame in celebrity culture creates Schrödinger's Cat characters that are variably alive and dead on different parts of the page. It's a book whose narrative, if there can be said to be one in the usual beginning-middle-end sense of the word, can be absorbed in both a 400-word paragraph and/or the 40,000 words of the full text, like how Rumi said “You are not a drop in the ocean, you are the ocean in a drop.” It's a handy reminder to me, who just published a novel (I Miss The World, by King Shot Press), that in some ways is the anti-bathroom read, in that it's constructed as a no-chapters trench of a narrative that seals you in without a (bathroom?) break until it lets you out at the end. The Atrocity Exhibition reminds me there's no one way for authors to push the edges of form in the service of something new.

So whether you anticipate a short or long stay on the porcelain throne, The Atrocity Exhibition will expand and contract like the world's most perverse accordion, according to your needs. You can also make it a permanent fixture of your “smallest room” and read it, piece by piece, over the course of months or years, letting its artistry slowly accumulate inside you like lead poisoning. Think of this phrase as you're dancing the wiggle-dance to the toilet, and take comfort in its endorsement of what goes on in that magnificent bowl: “In the post-Warhol era a single gesture such as uncrossing one's legs will have more significance than all the pages in War and Peace.”