Gint Aras' Would You Rather

Gint Aras'
Would You Rather 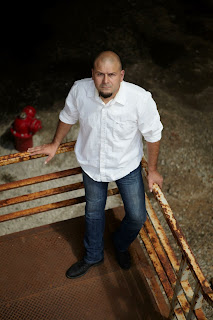 Feet. It sounds like a way of writing and doing yoga at the same time.

I guess the only way to satisfy my fantasy of waiting to check out at Costco and seeing a lady with my novel, a lobster and a robot in her cart would be to have one giant bestseller.

I’d rather anyone who bought my book right now be considered a genius. I need to be known now or I’ll never have my Costco moment.

Or rather not use formal sentences at all? And sustain the madness over 65,000 words? But throw in some clausal variety, like this: Yet the selfless woman bought the lobster only to set it free, and the novel only to help the author achieve fame, whereas the robot she needed for a private matter which remains none of the gentle reader’s business.

This sounds like a choice between the modes of torture from In the Penal Colony and The Hitchhiker’s Guide to the Galaxy. How would you like to be executed? I’ll take listening to my own Vogon poetry.

The only compromise of all my values turned overnight success would be a memoir of how I made my fortune investing in Halliburton and Pearson. I’ll take the familiar hell of obscurity to the company of demons.

Some characters deserve hatred. If Iago turned out to be a handkerchief tailor, and spent time filling a huge order from Morocco, Othello would suck.

I still write phone numbers on my forearm. Recently I wrote, “Get lobster.”

Trick question! You’re making me realize I should allow my characters more fulfilling sex lives. But model it on what experience? There’s the rub!

I would like to have written the first banned book of standardized tests.

Easy one. Come here, Dylan. We won’t go gently into that bad night.

Looks like I won’t be doing any reading on the island.

Sounds like the options available for the child of an alcoholic. I’ll take being ignored. It’s easier on the heart.

Does the voice get to be Scarlett Johansson? My behavior would change, believe me. Twitter doesn’t need to see my thoughts.

Computer! I still hand write in a journal, one of my favorite pleasures.

I mean…they’d clear out. At least they thought it might be interesting, but it turned out to be some guy’s package.

The beautifully described lobster, still alive, beside a robot and my novel. I’ll quote my hero, Tom Waits: “The world is a hellish place, and bad writing is destroying the quality of our suffering.”

Gint Aras (Karolis Gintaras Žukauskas) lives in Oak Park, Illinois with his family. He's a community college instructor, photographer, and has worked as an editor, columnist, interpreter, translator, and has published two novels, FINDING THE MOON IN SUGAR and THE FUGUE, Learn more at gint-aras.com, or follow on Twitter @Gint_Aras